Unfortunately, though, when you ask for a Tin Roof or a David Harum, the young folks behind the counter have no idea what you’re talking about. Apparently the recipes for the Tin Roof with Spanish peanuts and the David Harum with fruit sauce have been lost.

“In 1913 with commendable enterprise, Kanelakos Brothers have refitted their store on Foster Street and changed it into an up-to-date ice cream parlor. Joe has an eye for the beautiful at all times and the beautiful is much in evidence in the transformation that has taken place. He has well named his store the Palm Gardens, where things are cool and clean, An up-to-date soda fountain has been installed. Ice cream sodas and fresh fruits will be featured at this store now, with of course, cigars and tobaccos.”The Palm Gardens had wrough iron chairs and tables, huge palm tees and lots of lace curtains. It also had tulip shaped chandelier lights hanging from the ceiling and also ceiling fans. There was no mechanical refrigeration  and treats such as a David Harum Sundae could be purchased for 15 cents.

The Palm Gardens had wrough iron chairs and tables, huge palm tees and lots of lace curtains. It also had tulip shaped chandelier lights hanging from the ceiling and also ceiling fans. There was no mechanical refrigeration Treats such as a David Harum Sundae could be purchasesd for 15 cents. NOTE: David Harum Sundae (vanilla ice cream, crushed strawberry, crushed pineapple, whipped cream, and cherry) which I learned came from a best selling novel David Harum; A Story of American Life 1899. In 1918 they opened a Tea Room on the location serving soups, pie, sandwiches and all kinds of soft drinks as well as home made ice cream and candies during this time. Ice cream was kept in round steel pots immersed in a brine solution made from chopped ice and rock salt kept either in a large wooden pail or containers designed for this purpose. In the late 1920’s mechanical refrigeration was introduced.

Kanelakos Brothers also had a smoke shop and a billiards room on the second floor. Some of the goodies in 1930: pecan cream roll 50¢ lb., Brazil cream roll 60¢ lb. cream fudge 50¢ lb.In 1935 Chris Moskos purchased the business from Malloy & Williams and changes the name to the Perth Tea Room and operates an ice cream parlor and restaurant. He also manufactures a variety of home-made candy. In 1937 Moskos put in machinery to make his own ice cream which he sold in bulk and packages. In 1948 he moved to a new location on Gore Street to open the Perth Tea Room (The Perth Restaurant location) and Candyland. —Perth Remembered

This is an interesting photograph of Johnson’s “Nickel Theatre”. (Admission was 5 cents.) “She Was His Mother – A Big Human Drama” seemed to be the main attraction of the day. The theatre was located in the Masonic Temple Building, later the Carleton Place Canadian newspaper offices, and most recently, the home of Apple Cheeks Consignment Store. Pop in to the store and gaze up at the black tin ceilings – the one remnant remaining of the theatre today… Carleton Place and Beckwith Heritage Museum

The ice cream shop used to be on the other side of the Roxy Theatre. After the movie some of the kids went to left side of the building where Caldwell Bankers is now located to Ed Keys Ice Cream Parlor. They handed over their money to Bertha Rose and Marjorie (Douglas) Rintoul for either a large scoop ice cream cone for 5 cents or a 15 cents sundae with peanuts and maple syrup.

Marj remembers the high ceilings, the wide bladed ceiling fans, and the glass topped tables.When the ice cream shop vacated the building it became the office and repair shop of Beatty Washers and the manager was Dan Craig and his salesman was Gordon Bassett. That site later became the liquor store  in 1945 when they moved from their former location on Bridge Street in the old Munro Archery Shop with Leo McDiarmid as manager and Harold Robertson as the clerk paying a monthly rent of $45.

“I remember the liquor store being across from the Carleton Place Post Office- You had to go fill out a form to get your liquor”.-–Anonymous

Who Was David Harum?

Written by retired Syracuse, New York banker, Edward Noyes Westcott, the work was rejected by six publishers before being accepted for publication by D. Appleton & Company. Published in the fall of 1898, some six months after the author’s death, it sold an impressive 400,000 copies during the following year. Although the book contains the mandatory love story, the character and philosophy of the title character, small town banker and horse trader David Harum, expressed in the dialect of 19th-century rural central New York is the focus of the book. 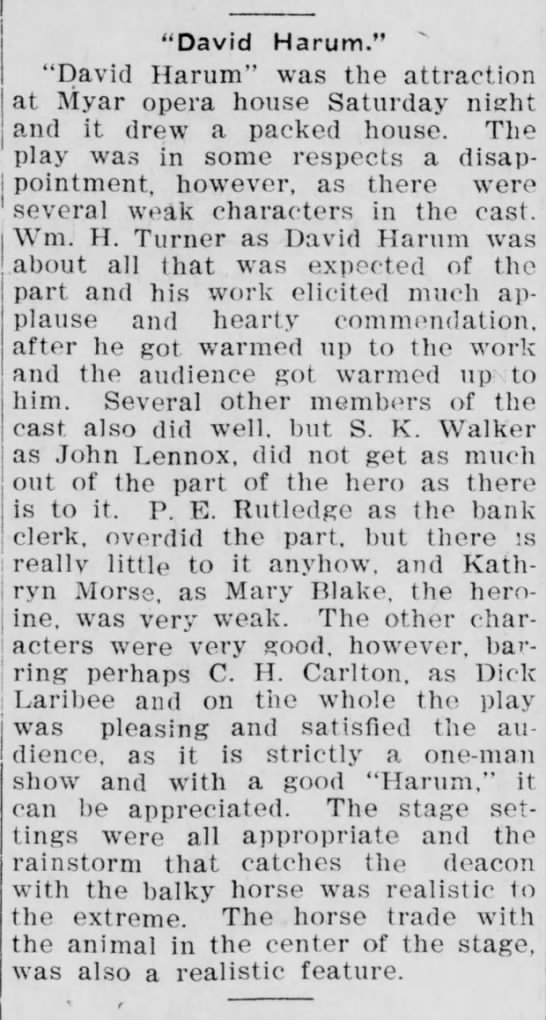 Memories of the Ideal Candy Shop

Pour Some Sugar on Me! The Demise of the Penny Candy

Watch Out for the Glue in Your Ice Cream!

Margaret Love -From Sweet to Sour