Julia Waugh Guthrie Photo– 1935
Scored this beauty find at a antique store in Perth. Love the grandstands in back. The grandfather of Bruce Guthrie,Naydene Guthrie Gardiner, Angie Hastie, Lynn Hastie-Card and Mike Downie is in the back row…Howard Little

Another winner from Peter Bradley—

Here are some more cheerleaders from about 1958 with a good view of the bleachers in the background. The girls were being distracted by the boys (so whats new?)

From the Carleton Place and Beckwith Heritage Museum Thanks Jennifer–Llew Lloyd The baseball stadium was part of Riverside Park. The school was built beside the church. 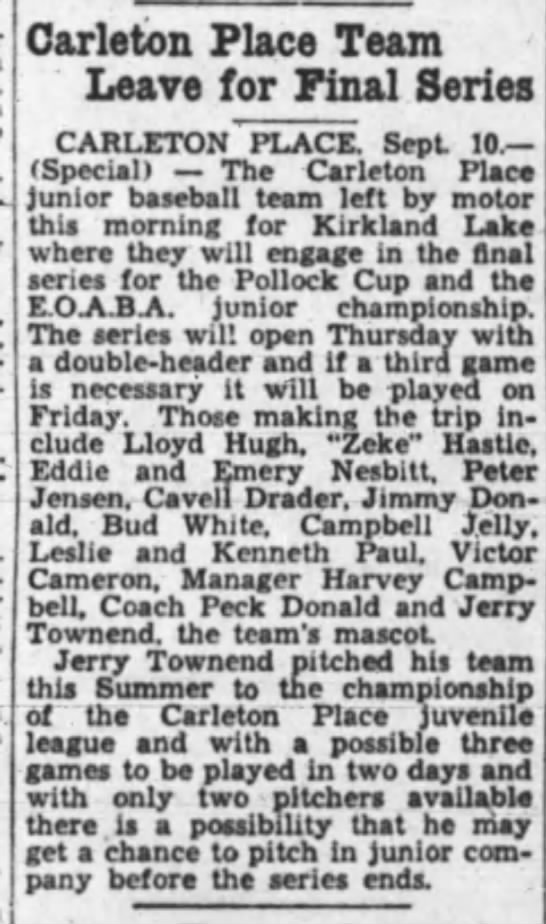 Linda Begin I miss that old grandstand, I remember going to St. Mary’s me and three friends got caught smoking behind the grandstands Mr. McNaulty our principle was not happy with us.

Dale Costello Spent many a day in the stands. And under the stands. Carleton Place’s answer to Yankee Stadium.

The House of David–For baseball fans, playing under the lights was an added draw. It’s hard to believe that night baseball was played in Carleton Place before it was played at Wrigley Field, home of the Chicago Cubs! I 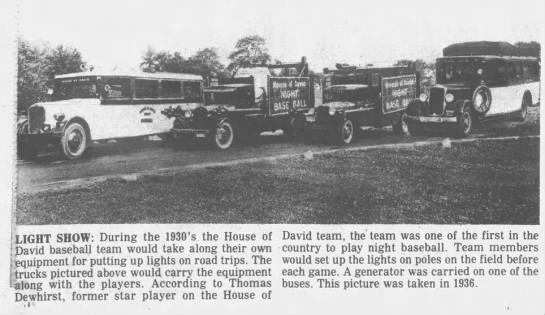 Ray Paquette— During the 1950s, the ball park was the site of games featuring teams of “barnstorming” American professional baseball players who played local teams. The purpose was to raise money in support of local baseball. One such team, “The House of David” featured two things: all the players sported full beards and the game was played at night under lights atop of standards that were brought to town by the visitors. For baseball fans, playing under the lights was an added draw. It’s hard to believe that night baseball was played in Carleton Place before it was played at Wrigley Field, home of the Chicago Cubs! It was quite an experience for young boys at the time..

The House of David 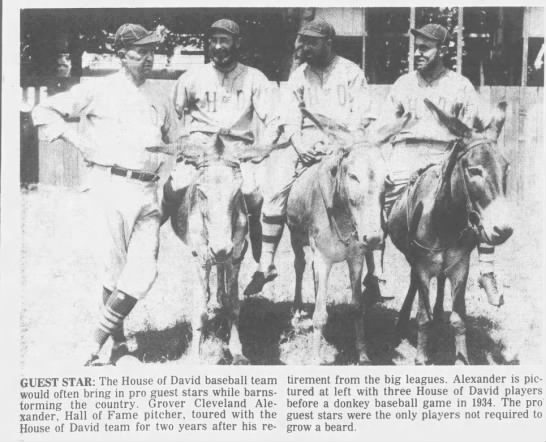 In 1903, Benjamin and Mary Purnell founded the Israelite House of David, a religious society in Benton Harbor, Michigan.

But they also allowed women members to vote and hold office, ran an amusement park, sent traveling bands on the vaudeville circuit — and formed a sensational baseball team.

With their long hair and beards, the House of David players drew massive crowds as they barnstormed around the country.  Famous professional players occasionally donned fake beards and joined the team for games, including Grover Cleveland Alexander, Satchel Paige, and even Babe Ruth.(They considered signing the Sultan of Swat in 1934, but decided his hedonistic lifestyle would be a poor fit for the ascetic team.)

Playing as far afield as Hawaii and Mexico, the House of David continued to draw crowds until the 1950s, when the splintering of the scandal-wracked commune and rise of Major League Baseball led to a decline in popularity.

While the baseball team is no more, fractions of the religious society, and the communes they built, still exist today.

The Corkery Baseball Team– What You Did Not know about this Photo!

Should you Fear the Beard? The Sandlot is in Your Carleton Place Backyard!

The Symphony of the Louisville Slugger and Sam Bat

The Glory Days of “Lefty” Hill of Carleton Place