Framing barns, sheds, and stables according to Robert J. Mackey,  was a much more difficult part of  carpentering than building houses. To frame a big barn, for example in his opinion requires a greater knowledge of the carpentering art than any other part.

Between the years 1875 and 1886 when he moved to Ottawa Mr Mackey framed barns and stables in every township in Carleton county and in parts of Lanark county. The biggest barn job which he had during those 11 year was a barn which he erected in Beckwith township about 1877 for a Mr. William Goth.

The barn in question was erected just off the highway between Ottawa and Carleton Place and was still standing in 1930, but was no longer owned by Mr. Goth at that point. There is still a bank barn on Highway 29  between Carleton Place and Almonte that you can drive by and see what it looks like. These structures were sometimes referred to as “basement barns” because of their exposed basement story.

A bank barn or banked barn is a style of barn noted for its accessibility, at ground level, on two separate levels. Often built into the side of a hill, or bank, both the upper and the lower floors area could be accessed from ground level, one area at the top of the hill and the other at the bottom. The second level of a bank barn also could be accessed from a ramp if a hill was not available.

That barn belogning to Mr. Goth was 50 by 100 feet in size and had an addition of 40 by 7 feet. It was known as a bank barn and contained stables, cow byres sheep pens. The timbers in this barn were 12 inches square and were made of Elm and Ash of great length. Such timbers would be impossible to get locally now. It took Mr. Mackey and three assistants five months to erect the  Goth Barn.

Did you know? William Goth, of Beckwith, from the breastbone up was entirely hidden in white whiskers, hair and eyebrows.  All one could see was a purple nose and two twinkling blue eyes.  He kept good horses and many a time passed the C.P.R. station, homeward bound, at a full gallop.  Mr. Goth had a sense of humour and my mother, nee Margaret Holland, who was telegrapher in the post office, situated at that time, in the building across Bell Street from the Arcade, recalled a remark he made to her one time.  It appears that Mr. Goth and David Findlay Sr. had a tussle in the post office and Mr. Findlay apparently got the worst of it.  When Messrs Struthers and McEwen remonstrated with Mr. Goth, he threatened the whole staff, at which my mother burst out laughing.  Mr. Goth turned and said to her; “Young lady, when I was young I used to laugh too, but, now that I am in an office of public trust I am above laughing.”  John Goth, a son, was principal in the Town Hall school and his daughter, Miss Goth, taught in first grade. 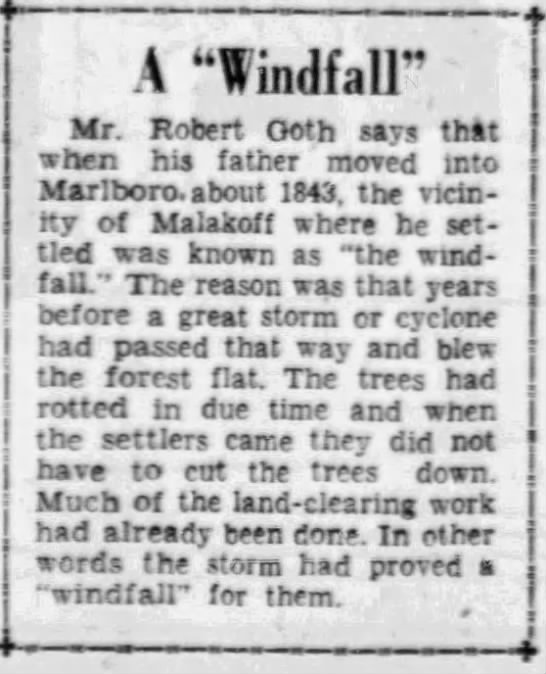