Before the town became officially Almonte, it had a succession of names, being called in turn: Sheppard’s Falls, Shipman’s Mills, Shipman’s Falls and Waterford. It was later called Victoriaville for a short time. A map dated 1855, in the Public Archives of Canada, gives the name of Ramsayville, wiith the post office designated as Ramsay.

Shipman built a sawmill in 1820 and a grist mill in 1822. Shipman’s log house was located where the Post Office now stands. His second house, of stone, was built in 1835 and once known as the Almonte Hotel, which was the site of Rooney’s poolroom.
Mr. Rebin, as part of his teaching duties travels extensively throughout the country on the Canadian Club lecture circuit and before that with the Secretary of State Department and this has given him the opportunity to local many historical buildings. One restoration of which he is particularly proud is Connington Manor, in Didby, Saskatchewan, which is now a historical site. Another recent project was Gatineau Lodge in Quebec.

Mr. Rebin learned about the Almonte Post Office while travelling to the White Lake area where he purchased some property following the sale of a farm in Saskatchewan. Driving through Almonte, he and his wife noticed the realtor’s “For Sale” sign on the building and made the purchase about a year ago. Since then a great deal of planning has been done and work was actually started about two months ago. They expect the top three floors of the building will be ready for occupancy about the end of July.

Mr. Laprade has a work force of ten local men, mostly students, who have been pain stakingly peeling off layer upon layer of old paint and varnish from the walls and woodwork. Mostly of sound, clear pine, the woodwork will be sanded smooth and refinished with clear varnish. Plaster walls, patched where necessary are being completely stripped and will then be covered with a fresh coat of paint. Metal ceilings, flaked and rusted from years of dampness when the building was not in use are having to be cleaner with wire brushes before a rust inhibitor and fresh paint can be applied.

Modernization will be kept to a minimum except in the areas of electrical wiring and necessary changes in the plumbing system. Even the old hot water heating system will be restored to working order with the replacement of one of two hot water boilers which was damaged when the building was used briefly as a youth drop-in centre a few years ago.

Hard maple flooring in the top floor will be sanded and refinished.

According to Mr. Laprade, local tradesmen and materials are being used wherever possible and he said that even the young workmen on his crew have taken a real interest in the restoration. He figures over 50 gallons of paint remover will be necessary to complete the cleanup.

“Structurally the building is in tip top shape”, Mr. Laprade said of the 88 year old structure that was built of red Nova Scotian and yellow Lanark County stone by Thomas Fuller who combined both anglo and French interest in its design. According to a book entitled “Ontario Towns” published by the Oberon Press, the building’s design is a combination of “French Renaissance and Victorian Gothic architecture”.

Mr. Rebin has in his possession a copy of the “Estimates of Canada for fiscal year ending June 30, 1889” for the Almonte Post Office indicating a construction estimate of $33,000 plus $6,250 for the land. At today’s prices, he feels that to duplicate the construction now would cost up to half a million dollars.

He said that many older resident have stopped by while work is in progress to offer their comments and added that one room on the ground floor will be “audio oriented” where older residents will be able to stop in and permanently record their early recollections of the town on tape for future generations and historians.

“May people”, he said, “have been extremely helpful in supplying information about the building, especially Town Clerk, Bob France and Building Inspector, Charles Symington.”

Comments and information about articles for the museum will be very welcome and one question that popped up was met by an affirmative answer Mr. Arnold Craig will be retained to maintain the familiar old clock and its chimes. Both will continue to operate as in years past. 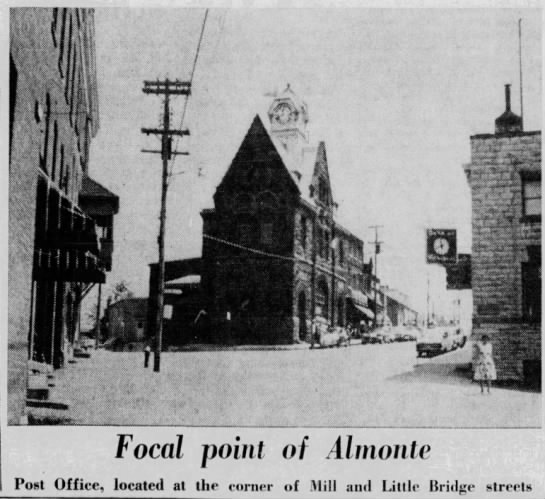 Fifty years ago the late William Thoburn, MP for Lanark North, induced the Public Works Department to provide a town clock on top of the Almonte post office building. Sir Robert Borden’s administration was not so open-handed as some of its successors, for it tried to settle for a one-dial clock. But Mr. Thoburn would accept nothing less than a four-dialer. He got it. “Fifty years is a long time for a clock to keep on working steadily,” the Gazette observes, “and the local Big Ben gives signs of being tired; it isn’t what it used to be . . . For almost a year now the clock has had trouble with its striking. It is said Carleton Place also experiences something of that.”

It seems the Almonte clock has developed  a tendency to strike 10 minutes ahead of the hour. Last week a craftsman from the Post Office Department made an adjustment, but it is feared the clock’s days are numbered. The Gazette understands that “the Dominion government has discarded the practice of furnishing clocks for post office buildings.

The Mystery of the Almonte Post Office Clock –Five Minutes Fast and other Things….