This is a photograph of the Rosedale Union Hall Cheese Factory, taken about 1910. Notice the old containers which held the farmer’s milk from which the popular cheese was made. At this time, horse drawn wagons were the only way of delivering and picking up products from the factory.

Many area residents have undoubtedly heard of the old Union Hall Cheese Factory in Ramsay Township. A landmark at one time, it was well known throughout Eastern Ontario as a source of some of the most delicious cheese manufactured anywhere. Mrs. Berneice E. McKay did extensive research on the cheese factory, wrote this history of it, which will run in segments in succeeding weeks.

One of Mr. John Dunlop’s accomplishments, was the building of the first cheese factory on his property in the year 1873, on the east half of lot 16 on the 1st concession of Ramsay Township.

This replaced the old milk pans, by which cheesemakers would leave milk overnight in a pan, the cream would rise to the top when cold and it would be skimmed off into a crock, when enough cream was saved to the acquired amount for the old dash churn.

Those old dash churns were a large crock about 10 to 12 inches in diameter and about 24 to 30 inches high. The also had a heavy crockery lid with a hole in the middle, and there was a long broom-like handle. On the bottom there was nailed a cross-piece a little smaller than the inside of the churn. This was made of a special wood; “white birds eye maple.” If it wasn’t it would taint the butter.

Sometimes a worker would dash away, “up and down” and keep turning the dash piece of wood. Sometimes it would take hours before the butter would break and you would know by the sound of the dashing or cream. Then the milk would separate from the butter and that, of course, was buttermilk, which some people really like. If the cream was sour, the butter was made faster. If the cream was sweet it took much longer.

In 1874 on June 4 cheese was first made in the district, and twice a day the farmers drew their milk from their cows to it vats.

During the 1874 and later, when the cheese was being made at the Rosedale Union Hall Cheese Factory, Andrew Stevenson would load a wagon up with 25 or 30 boxes of cheese, and head for Pembroke with a team of horses. At this time the building of the railroad was in full swing and camps were set up in different places.

Cheese sold from seven cents to eight cents a pound and some of the places where he stopped they bought 10 boxes of cheese from the wagon. The best place to store it was in a trench in the ground and covered over with earth; it kept quite well. One bachelor cooked everything in the fireplace and baked beans in the sand. His name was Herb Bolton and lived about a mile from Albert Miller’s. Oh the smell of that fresh bread really made one hungry.

The first factor was a picturesque three-story building with a cottage roof, and a balcony above which were four windows. (No one has pictures of this building at this time.) They were burned at the time of Wm. Dunlop’s fire.

The cheese was hoisted to the third storey and kept there until fall. The cheese had to be turned every day to be kept from molding. One 75-pound cheese fell to the floor and it just exploded when, in the fall, they were loading up to take to sell.

There was only one piece of machinery and that was the machine, that chopped the curd. Everything else was done by hand. Each cheese was pressed alone, and they weighed only 75 pounds each.

The water supply came from a spring on the Dunlop property, and was piped down to the cheese factory by the use of tamarack poles five to six inch in diameter and about 20 feet long. They were bored by a steel auger and were driven by horse power, from one end to the other of these tamarack poles. They were put together with space piping. A blacksmith made the ring to seal each joint, and it was a distance of about two hundred yards north.

In the autumn the cheese was shipped to markets. Now, the cheese is turned every day and shipped every week when they are eight days old.

Later Mr. Everett went into partnership with Mr. Dunlop and together they made repairs. They removed the top storey, which was then Mr. Wm. Dunlop’s garage (now Mr. Norman Dunlop’s garage, his son’s).

They installed steam pipes and put in a new plank floor. They had a steam pump to pump the whey into the tank outside. A new vat and boiler were installed in 1888. A few years later the cement floor and steel roof were added. The steel roof still remains on the building but is rusted somewhat.

The first cheese was very soft as it was heat-cured. However, there have been great improvements made since those days.

Mr. Albert Graham Miller was interested in learning how to make cheese, and he went to work at the cheese factory in 1901. He was 15 or 16 years old, but it was John B. Wylie who owned it then, but Jack Hitchcock was cheesemaker and he worked under his supervision.

Mr. Albert Graham Miller is still living and is a patient in the Almonte Hospital. He is blind, but what a fantastic memory. He’s in his late 90s and was married to the late May Anderson from Middleville, Ont. and they had three sons. He made cheese for 44 years in various cheese factories.

In 1927 John B. Wylie sold the Union Hall or Rosedale Cheese Factory to Producers Dairy. In 1936, Alec Moses, cheesemaker, then won the John Echlin Cup for the most amount of cheese sold on the Perth Board in Lanark County. “The Echlin Cup was donated by Mr. Echlin the cheese inspector”.

In 1949 George Affleck, who now lives in Clayton, came very close to winning the Echlin Cup for the highest average score in Lanark county.

In later years the tamarack poles were replaced with galvanized piping, but the spring water still ran into a tank in front of the cheese factory for many many years. Winter and summer, the farmers watered their horses there.

Mr. Archie Robertson, who lived across the road, got their drinking water there, and also Mr. Roy Robertson his son. They never had a well, just a cistern and pump in the house for the needs of water other than drinking.

In 1933, a well was drilled at the factory. There was also a lean-too at the north end of the factory where they put in ice.

The whey tank was on the south side of a corner of the factory and was sunk into the ground three or four feet deep.

The cheese boxes were made at Bill Nichols in Carleton Place and cost 10 cents each in 1910-1913. They had a huge basket rack and a team of horses would bring a load of 400 cheese boxes at once to the Rosedale Union Hall Cheese Factory.

In 1928, there were 41 patrons at Rosedale Union Hall Cheese Factory. The number of cows totaled 410. The average selling price for cheese was 21.2 cents per pound and the average price for whey butter was 36 cents a pound.

The depression years brought hard times and in 1932 cheese sold for 9.49 cents a pound and whey butter for 10.22 cents a pound. Gradually during the thirties production and prices increased. In 1943, there were 55 patrons sending their milk to the factory.

In 1946 the patrons of Rosedale bought the factory from Producers Dairy at the cost of $2,350.

As this old cheese factory was built in 1947 by the farmers of Union Hall district.

It was agreed to sell 35 shares at $100 each, a share to the patrons of the factory.

All profits or surplus after ordinary depreciation and expenses was to be credited to a reserve fund for a new building. Roy Robertson gave the acre of land, as his share, and the patrons were also asked to give gratis six days labour of eight hours a day. The Hydro never came until 1948 to Union Hall.

In 1949 George Affleck agreed to make cheese, Sundays included, for $1 per customer for 92 score cheese, 10 percent of bonuses on 93 and 94 score cheese and eight cents per pound for manufacturing butter.

Rosedale Union Hall Cheese Factory operated about 30 weeks out of the year. Usually beginning the latter part of April and closing in mid November. 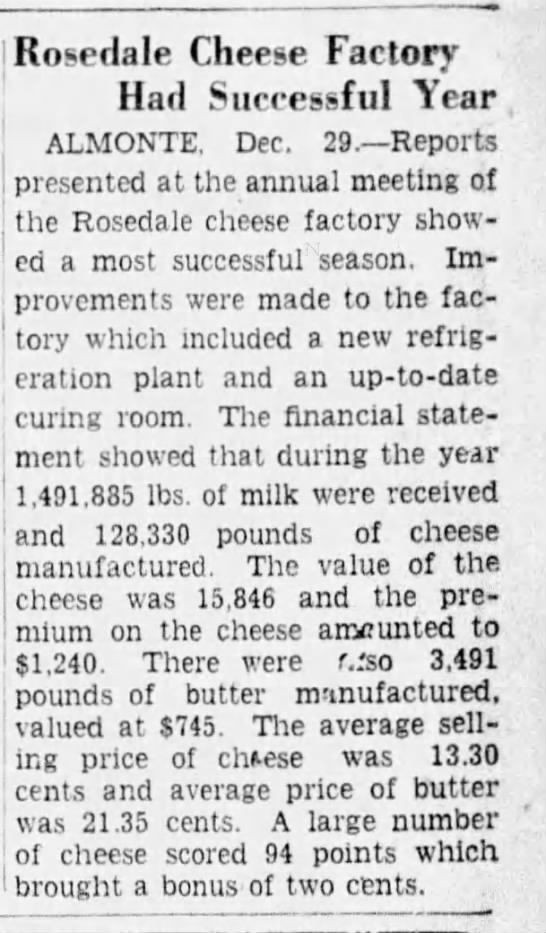 Did you Know Mother Goose Came from Blakeney and Union Hall ?

Sparks are Flying at Union Hall

Some Fromage About the Hopetown Cheese Factory

When the Cheese Crashed Through the Floor