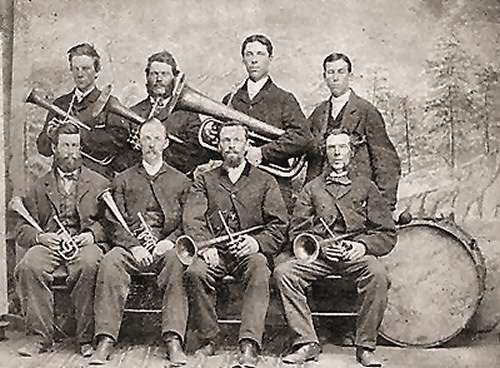 Will you be kind enough to permit a resident of the northeast side of the village to call the attention of the ratepayers to the late action of the council granting a license to John Fay. to sell liquor. I have said “ to sell liquor,” which be the only object, as he has no accommodation for travellers or stabling. This John Fay is living with his father-in-law, Dennis Murphy and there are no more rooms than wanted for both families.

For stables and sheds there is but one small cow house. The house is far from the business part of the village and no one will stop there unless for glass of whiskey. The evil results granting licenses for such purposes have already been observed in drunken rows and men staggering home there from a late hour. There is but one opinion of the matter and that is that the Council have done very wrong in granting a license and should be held responsible all the evil which must undoubtedly result from it.

The facilities for drinking were dear knows, already sufficiently numerous without such an increase. The Inspector, S. Tooley, is, I believe, doing his duty, and will, let us hope, be supported by the action of the authorities as well its the voice of public opinion. Mr. Tooley can put and end to it all by doing his duty.

Mr. Peter McArthur, if I am rightly informed, strongly objected to granting the license in question. Mr. Tooley deserves no credit for straining a point to give John Fay a Certificate. Putting up half a dozen boards in a cow house and calling it a stable—saying that has “ four spare bedrooms” when there are only five bedrooms in the whole house, to two families, is too near a lie to be called honest. The owner of the house, Dennis Murphy, a decent laboring man works in the No 2 mill.

The Hotel keeper,” John Fay,’, is his son in law and lives with him, also a laboring man, but not contented with earning an honest living. By the license of a venal Council duty it is to protect the public, takes to pandering to the miserable appetites of the unfortunates who crave after Whiskey. If John Fay has any shame let him close his business down

I noticed in the last issue of your paper, a letter signed “ Resident,” in which he makes a bitter comment on my Hotel, as well as a disgraceful attack on the council, for granting me a license. Now, sir, I ask permission, through the columns of your paper, to prove to the public-that “ Resident’s ” letter is nothing but a gross fabrication of falsehoods. In the first place, Mr. Tooley, the Inspector, came and inspected the premises, and found everything according to the requirement of the law.

I have four spare bedrooms, as well as two sitting rooms, of which are well furnished. I have not as was stated, a cow house, (but a good stable stalled off too hold eight horses) and a good well in the yard, from which Mr.  Resident has been often accommodated. So he ought to blush at his misrepresentations and falsehoods but seems that his mind is nothing but a sink of pollution and that in attacking good and  respectable neighbours, he opens up a sewer, to carry off his daily accumulating filth.

l am sorry to have to make those unpleasant remarks, but in justice to myself I cannot help but shut up the – falsehoods of this worthless character – to the public and would future to mind his own business as I know him well.

Sir,— I understand there exists a bylaw in this village, and very rightly too, making it necessary that proprietors of Minstrel Troops, clog-dancing and other like shows, are obliged to take out a before they are privileged to open such exhibitions.

Since your last issue, two of these parasites have made a drain upon our industrious villagers without adding any quota to our village. It appears to the writer that not only is this by law, but several others are nothing more or less than a dead letter. I would like to know who are the proper parties to put these bylaws in force in the absence of a mayor or enforcer of bylaws. Or would it net be more advisable that the Council should appoint an officer for that purpose, with a reasonable allowance of salary for his trouble, in order that the dignity of the law would be sustained.