Thanks to Stephanie Sweetnam we are putting things together.. Her comment:

My father Michael Bennett took these pictures and wrote the original story about Mrs.Crosbie for the Canadian. He probably took some of the other pictures in the box and could fill in blanks.

If you read the blog we found out that the woman in the pictures was Mrs. Irene Crosbie who ran the general store at Flower Station which is in the township of Lanark Highlands. She and her husband Art ran the store for many years, after he passed away she continued to run it until she was well into her 80’s. She was a remarkable woman who raised a family of I believe 18 children of which I believe included 3 sets of twins. Read the article for some info on her and the Declan Church and their bean suppers. Even has the recipe for Sand Baked Beans.

So today looking for some information  about the Deachman’s in Watson’s Corners I found this. I was just thrilled I could document it as it is buried somewhere in the newspaper archives.

Irene Crosbie, who raised 18 children, was a fixture at the family store at Flower Station, near Perth.

Her hundred-plus descendants agreed. The mother of 18 and great-grandmother of 110, Irene Crosbie was remarkable. She died Friday at a Perth nursing home at the age of 95.

“There are not many women like her,” said Sandy Deachman, who lived across from the Crosbie family in Flower Station, 30 kilometers north of Perth.

A slight understatement, most agreed.

Mrs. Crosbie was left to run the family’s business, Crosbie’s General Store in Flower Station after her husband died in 1966 and most of her children had left home.
She finally surrendered the business to her daughter at the age of 90, but continued to work there for an additional three years.

A devout Catholic, the family matriarch remained involved with her church, organizing church functions, while keeping the family together. Always, it was the family that came first, her children said yesterday. 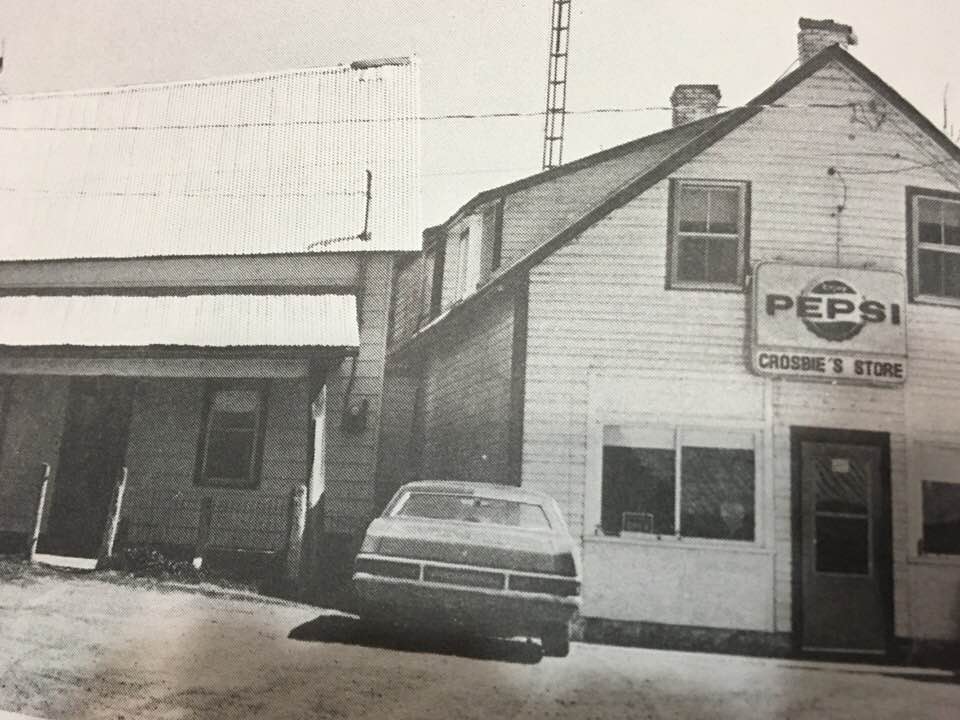 The middle child of seven, Mrs. Crosbie, nee Gemmill, was born on a farm along Snow Road about 30 kilometers northwest of Perth, in 1903.  She met Arthur Crosbie, who was 10 years her elder, at a dance in McDonald’s Corners at the age of 15. They married about a year later. He worked at a local cheese factory, and later took on several odd jobs, always anxious to earn an extra dollar for this growing family.

The couple bought the general store in 1946. The children don’t remember their parents as overtly affectionate, a pattern that fitted their generation.

“But they had to cuddle sometime” noted David Crosbie, one of 58 grandchildren.

Mrs. Crosbie gave birth to Marjorie Pearl a little more than a year after she married.
Marjorie Pearl would be the first of what became an extensive and proud family. The last child, Barbara Suzanna, was born in 1947. Most of the children, including three sets of twins, were born at home with little fanfare.

“She didn’t lie down until she had to,” Mrs. James said.

One of the youngest, Mrs. James was born December 25, 1942, immediately after her mother prepared and served Christmas dinner. Her exhaustive birthing experience would come handy. Mrs. Crosbie became one of the community’s busiest midwives. According to the family, she helped deliver about 40 children in the Perth area.

The family of 18 eventually settled in a 30 x 30 square foot house in Perth, about one hour drive south of Ottawa. After years of renovations, the square wooden farmhouse counted five bedrooms.

“We slept straight or cross ways,” Mrs. James said yesterday. “Whatever it took.”
Often, the family said, a bit of creativity and imagination was exactly what it took to survive.

“Everybody had their own job,” said Thomas Crosbie, one of eight sons. “There was enough work to keep us out of trouble.”

Helping people, even strangers, made Mrs. Crosbie happy. Her sons and daughters recalled several occasions where Mrs. Crosbie gave away food to the hungry.
Many times, they said, she would awake at 1a.m. to provide gas, on credit, to stranded motorists. The Crosbie matriarch could not sit still.

“She never could find a bad thing to say about anybody,” said Shirley Kargakos, another daughter.

With every passing decade, Mrs. Crosbie would change, accepting the trends and customs of that generation. With great pride, Janet Ferguson reminisced about her grandmother yesterday. Ms. Ferguson recalled a time where an aunt could not accept that her son was living with his girlfriend.

“She was very proud of the fact that she had a big family and lived such a long life,” said Mrs. James.

Perhaps it was a constant barrage of children that kept her young but according to her children, Mrs. Crosbie never lost her enthusiasm. She lived on her own until the age of 92. Even after she moved to the Lanark Lodge, an elderly home in Perth, three years ago, Mrs. Crosbie could spring into action.

David Crosbie recalled a recent episode while visiting his grandmother at the lodge.
He said Mrs. Crosbie leaped towards the cafeteria, hoping not to be late for lunch. She left a surprised David Crosbie standing at her heels.

“I had to really hurry to catch up to her,” he said, prompting a laugh from his aunts and uncles.

But age would finally catch up. Doctors said last week that her body simply failed to function. For five days, her family held vigils by her bed. Yesterday, they said they were relieved for the closure.

“She left such a big legacy,” Mrs. Kargakos said.

According to Mrs. Kargakos, her mother’s final wish was that her family continue to pray together. And in her honor, they did. The family insists they will stay close. Of the remaining 16, only one lives outside Lanark County.

They hope their mother’s life and legacy will become an inspiration to future generations.
Yesterday, they got their wish. In the quaint and small downtown core of Perth, population 8,000, several generations of people approached Blair and Son Funeral Home from every corner.

“Do you remember that cousin?” one said.

“It’s such a big family.” repliled the other.

Inside, about five minutes before the wake was scheduled, the main room was already full.
“Oh boy!” announced one woman as she gazed upon the crowded room. She would have a small wait in line, it appeared.

Further down, a group of eight sisters facing their eight brothers waited.
Standing strong, some with tears, others smiling, they were a proud tribute to a unique and brave woman.