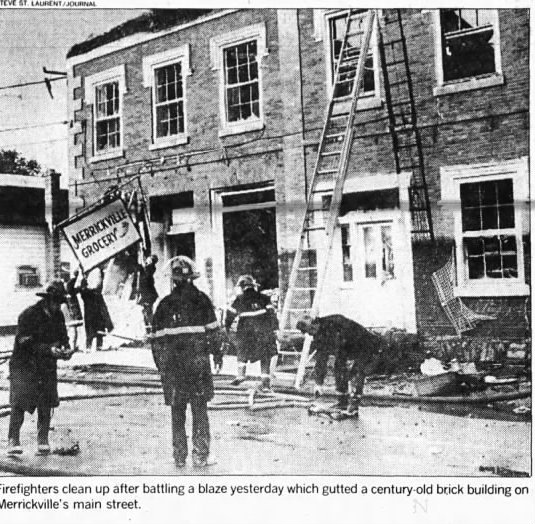 In May of 1980 a grocery store was wiped out and a young couple lost all their possessions in a fire that gutted a century old building on Merrickville’s main street. The fire broke out that day shortly before 3 p.m. which was caused by exploding cans of charcoal lighter that was stored in the back of a grocery store. The flames erupted into a giant fireball which crept up the back wall into the attic area.

Though the grocery store which was owned by Robin Chinkiwsky was hardly burned damage was extensive when the floor above caved in. Only one upstairs apartment was leased out and the two individuals that lived there were uninsured and lost everything. However their dog Sally was instrumental in alerting to the fire. The smoke was reported as deadly and the firemen found it impossible to control the flames.

This photo is from an album purchased at a yard sale in Winchester, Ontario. Other photos in the album were taken in studios in Paris France, New York City, Auburn New York, York Pennsylvania, and Curacao West Indies. This photo was the only one dated.

On a sheet of paper inside the album is written in pencil: “Presented to Mr. & Mrs. Arthur Johnston & Family. By Mr. & Mrs. Thos. Hames or Homes“. Click here to see it.

The photo is dated Jan. 28th, 1896, and the boy is identified as Master W.J.F. James. The photographer is D. E. Pelton, Kemptville & Merrickville, Ont.

Paranormal Hauntings of the Rideau Canal and other Unsolved Ghost Stories