In a new children’s book by Dr. J. B. McDougall of the Department of Education, Toronto, and the visit to this continent of Sir Edward Peacock all strangely linked to Almonte.

The event was noted by a correspondent who writes to the Almonte Gazette as follows:

“After I picked up my dally paper at the newsstand yesterday, I went into the store nearby and got a”Mother Goose’ pamphlet for my granddaughter’s birthday party on Saturday. When I looked over it I found it to be an entirely new and very interesting edition, written by a well known and highly esteemed friend of my own Mother Goose days Mr. J. B. McDougall, M.A.. D.Paed., formerly of Blakeney and Union Hall, and North Bay and New Ontario from Cobalt to the Soo, before he became anchored in the Department of Education at Toronto”.

“Teachers of kindergarten classes and of all pre-school children will miss something of great help to them if they do not get hold of Dr. McDougall’s book, “The Real Mother Goose”. J. B. has done a thorough job of digging down into the folklore to find what these silly Jingles really meant in the daily life, the politics, the history and music and poetry and drama and comedy and tragedy, of the dim and distant past, and to point out their influence on more modern history and literature, and why they have such a strong appeal to the imagination and love of music of children of all ages, even to this little boy of 83 summers”.

“I repeat, you will certainly miss something, not only for yourself but for the children to whom you explain the symbols of Mother Goose. And then I got another surprise, and I had broken free from the jubilation over Mother Goose, and had a chance to look at my newspaper I had just picked up at our town newsstand. On the front page was a very good likeness of *Sir Edward Peacock, whom I had last seen in the flesh as he was writing an examination paper across the hall from me in the old Almonte high school”.

“He will be in the U.S. shortly to check up Britain’s assets, in America for the Bank of England, of which he is a director. He may have to come to Ottawa in the course of that job; and he might be induced to visit Almonte, if for no other purpose than to refresh memories of his school days, call on the few of his former classmates who survive, and renew his acquaintance with his relatives in or near Almonte. Why not keep an eye out on our lads movements, after he lands in New York?”

I got the files for this article from the Ottawa Citizen and went back to the Almonte Gazette to see if I could find out the writer’s name. There was no name, so I figure it was the editor of the time that wrote it. 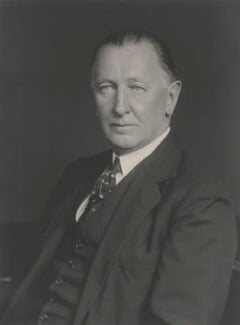 Sir Edward Robert Peacock, GCVO (1871–1962) was a Canadian merchant banker, born in St. Elmo, Glengarry County, Ontario. He is perhaps best known as a director of the Bank of England, or for his role as receiver general to the Duchy of Cornwall, the principal property management arm of the Royal Family. Peacock’s father was a Congregationalist minister who died shortly after Edward was born. His mother moved to Almonte, Ontario, where he received his schooling. He attended Queen’s University in Kingston, and under the tutelage of Adam Shortt studied philosophy and political economy, graduating in 1894 with a gold and silver medal. 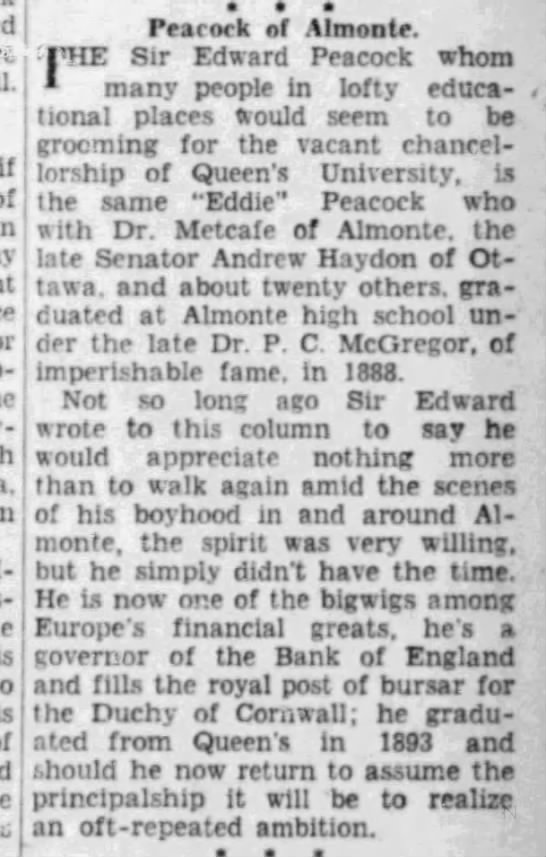 Watch Hallmark Movies? Writer? This is What You Get….

Here are Your Bestsellers of 1817

What If Books Were Banned in the Carleton Place Library? It’s Banned Book Week!

Immoral Literature–My How Things Have Changed