On the Lanark County Genealogical Society Beckwith Bus Tour Reeve Richard Kidd told us that once upon a time the name “Cram” was as common as sliced bread. Now, it is a name you rarely hear. So here is another episode in the Cram families. Thanks to a find of an obituary of Mrs. William Cram by Josh Greer- and property of Lisa and Brad Occomore of Valley Granite and Tile I was able to expand the family history.

The most interesting thing I found out was that her son was said to be drowned and later found out that her husband William Cram dropped dead at a revival meeting in Carleton Place featuring Crossley & Hunter. I don’t know about you, but I just would not want to die in front of my friends and neighbours at the Town Hall Opera Hall. 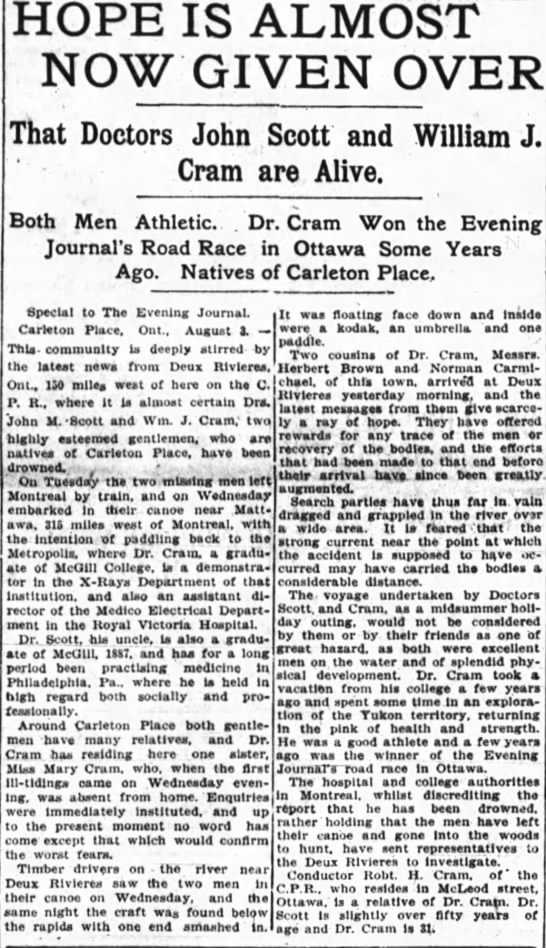 What was a Crossley & Hunter Revival Meeting where Mr. William Cram died?

The partnership bore fruit immediately. During their first year together, over 2,500 people professed conversion. In a short period of time, their contemporaries came to view Crossley and Hunter as the greatest evangelistic team of its day. Requests for their services poured in, and soon engagements for their revivals were booked three years in advance.

Crossley and Hunter conducted meetings throughout the United States and Canada, focusing most of their attention on smaller communities. They were the talk of the town in these centres, where town councils would frequently proclaim a holiday to allow those in the vicinity to attend church en masse.

The Dogs of Lanark County–Alex Cram

More “Clippings” on the Local Crams