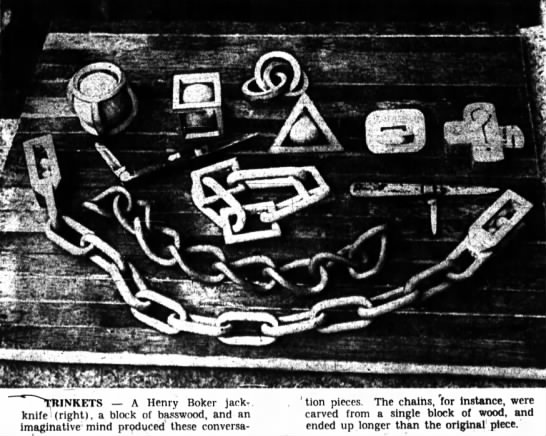 2016– A big thank you to Tina & Rob for generously donating a box of Walter Cameron carvings to the museum this week! Walter, the famous Blacksmith of Fallbrook was also well known for his whimsical wooden carvings, especially later in life. We are so pleased to be able to showcase these pieces in our Walter Cameron show case. They still bring a smile. Pop by the museum this weekend and see them for yourself! 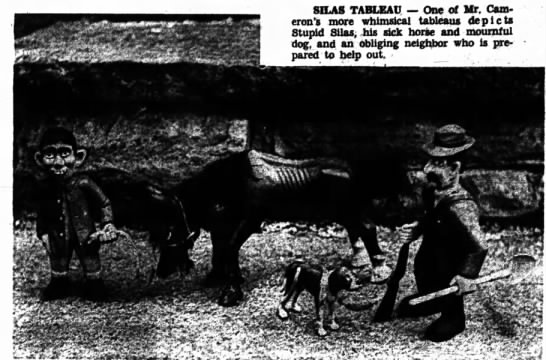 These items below belong to Brian Dowdall Beckwith Township Councillor

You can see by the fitted hoof, that oxen have cloven hooves and must have a two piece shoe or they would become lame under working conditions.
The double halves of a shoe makes it dificult to find and collect both halves a pair of oxen shoes. most shoes are found only when they are thrown off by the animal. ….hotairfan.
PS. Oxen can not lift each foot to be shod. If this is tried, they will fall over, so-o-o-o, the oxen must be lifted entirely off the ground with a hoist and straps to be shod.

Dave Goodings--My dad and I went to his house a few times. Walls covered in wooden chains and he had made a replica of the blacksmith shop where he and his father had worked.
He was quite the carver alright.

I often wished I had taken the time , to stop and chat with Walter , when I passed through Fallbrook . Walter used to sit outside a lot , in his golden years . I purchased the book by Audrey Armstrong , “The Blacksmith of Falbrook” , and it had a lot of information in it , some pertaining to my Grand Parents , Christopher and his wife Teresa ( Craig ) . My grandfather had a shingle/saw mill in Falbrook , which later burnt . My Grandparents were great friends , with Walter’s parents . I observed Walter , shoeing a horse on his ninetieth birthday , also the auction sale , where all Walter’s prized possessions found another home . Walter was certainly a legend in his time !

He Did What? Tales of the Queen’s Hotel

From the Buchanan scrapbooks