The first stones In the foundation of this handsome new edifice were laid on May 18, 1911, the anniversary of the big fire (1910), (read-The Lost Photos & Words- Carleton Place Fire 1910) and the corner stone was laid on Coronation Day, June 22nd, by the pastor, Rev. A. A. Scott, M.A., the address being read by Rev. tr. R : P. McKay, moderator of the General Assembly.

The corner stone contained the original copper casket recovered the congregation, latest reports of the church, Presbyterian Record, local and other daily papers and current coin of the realm.

Zion United Church, CarletonPlace, was practically destroyed in an early morning fire last Sunday. The loss is estimated at $150,000 according to present day values. Insurance of $35,000 was carried. It is understood the congregation has decided to rebuild the edifice in spite of the fact that there is another United Church in the town as is the case in Almonte.

The caretaker of the church discovered the fire when he went to stoke the furnace about five o’clock in the morning. As he was about to leave the main body of the building at 6.45 he saw smoke curling up behind the pipe organ and when he went to investigate he found that end of the church in flames. It is thought the fire started in the boiler room because the room from which the flames broke out is located directly over the heating plant.

In the battle to quell the fire which followed one new member of the Ocean Wave brigade, Ken Drummond, was injured by a falling piece of masonry. His back was badly bruised. Another had a nail puncture through his foot. Rev. E. C. Kelloway is pastor of the church which has a membership of some 300. It is understood that an invitation to worship at Memorial Park United Church, temporarily, was passed over in favor of services in the town hall.

Mr. H. R. Davey, local contractor and planing mill operator, was engaged on Wednesday to take lumber to the scene of the fire and make temporary repairs to the shattered roof. Mr. Davey found that the floor of the church was partly intact under a heavy layer of debris and ashes. The fine basement was not too badly damaged.

Sorry Chris but it was never Zion United .They were Zion ( Presbyterian) and Memorial Park United. Zion was the Free Presbyterian as opposed to St Andrews on Bridge which was Church of Scotland

A point of correction. When that fire occurred the United Church, Zion and Memorial Park had not amalgamated. The fire occurred on a Saturday afternoon when most of the young boys who chased the fire trucks were occupied at the Roxy Theatre with the Saturday afternoon matinee, yours truly included. After the movie ended, we all left the theatre and tore down to Judson Street to watch the OWFC in action… 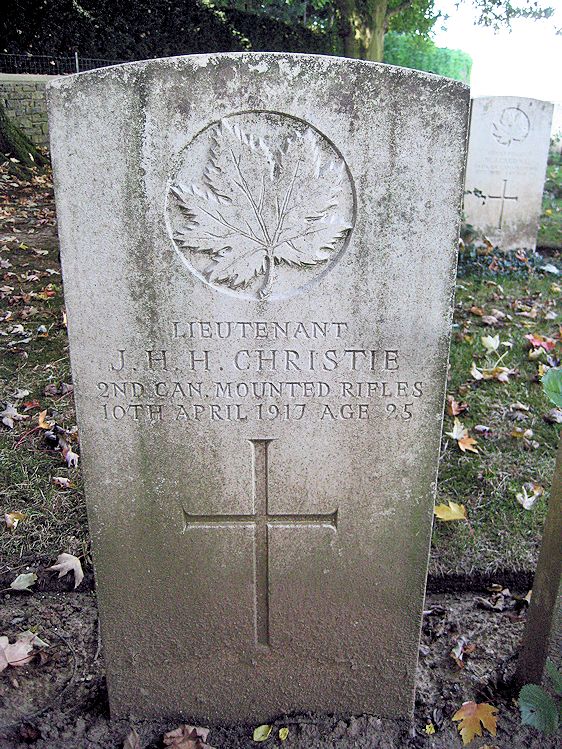 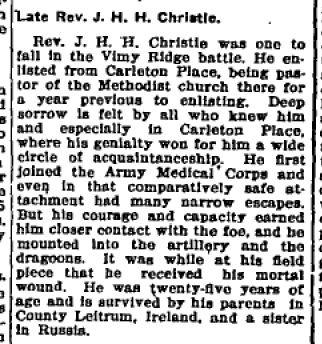 I met Ron Roe the first week I moved to Carleton Place in 1981. In fact, he made a point to come and talk to me when he saw me outside in my yard. Anytime I saw him from that moment on he was very personable and always had a great story to tell.

We saw each other in passing many times throughout the years, and I considered Ron a great example of being a Carleton Place citizen. Whether it was being a town councillor, or preaching and singing at Zion-Memorial Church, or on the  Board of the Carleton Place and District Memorial Hospital–Ron was an important brick in the foundation of Carleton Place.

Everyone will have their own personal thoughts about Ron, but I think his proudest achievement was The Hall of Valour that was once located at the Victoria Public School on Edmond Street. I wrote about the Hall of Valour in 2012, and when I visited; I was surprised to see Ron Roe as the curator. I had initially come to do research on local town hero Roy Brown who shot down the Red Baron Manfred Richthofen. But, in a short matter of time Ron had me quickly immersed in the history of the Hall of Valour and why it was so important.

So who was going to remember all these valiant soldiers who fought for our freedom Ron asked? There are the Legions and the War Memorials but– was there anywhere that provided memorabilia that honour former Veterans who gave their lives in defence of their Country? Carleton Place was chosen specifically because it had a great record of involvement in both of the major wars of the past century and Ron was proud of that fact.

Photo of Ron Roe from Mindy Merkley and Mary Cook

The concept of the Hall of Valour was “framed” by the Hon. Judge Matheson, of Kingston – the same man who created the design concept of Canada’s current flag.  Mr. Bob Campbell, was the Chairman of the Board, and Commander Jacques Levesque became the Vice-Chairman, and of course Ron Roe became the curator.

When I talked to Ron in 2012 he was not the same man I had met years before. His memory had begun to fade, and that infectious smile he once had was greatly waned. In the space of a year I noticed that Ron didn’t open the war museum as frequently, and word was he had moved into a seniors home.

The last time I saw Ron was at the senior’s home on Arthur Street when I visited Bill Bagg. Ron was waiting for the dining room to open sitting in a wheel chair chatting with Betty Robinson. I walked up to him and said,

“Ron, I don’t know if you remember me, but my name is Linda Seccaspina and I just want to thank you for all the work and love you have shown Carleton Place.”

Ron slowly got up from his chair with that same Ron Roe smile I remembered from years passed. He clasped my hand firmly with both his hands and said softly.

“I  have to apologize that I don’t remember you, but I want to thank you for remembering me.”

With that I gave him a giant hug and I was hoping to see him again, but our last goodbye was never said. Today I remember Ron Roe, as it’s hard to forget someone who gave us and the town of Carleton Place so much to remember. My love to Betty and family,

Ron will be fondly remembered by grandchildren B.J., Nora, Lorie, step-grandchildren Dale, Matthew and Geoffrey and numerous great-grandchildren. Predeceased by his parents Asa and Alice Roe (nee Armstrong) and his brother John Roe. Also survived by nieces and nephews. There will be no visitation or funeral service. Donations to the Perley-Rideau Veterans Health Centre would be gratefully acknowledged by the family. Online condolences may be made at www.marsdenmclaughlin.com. 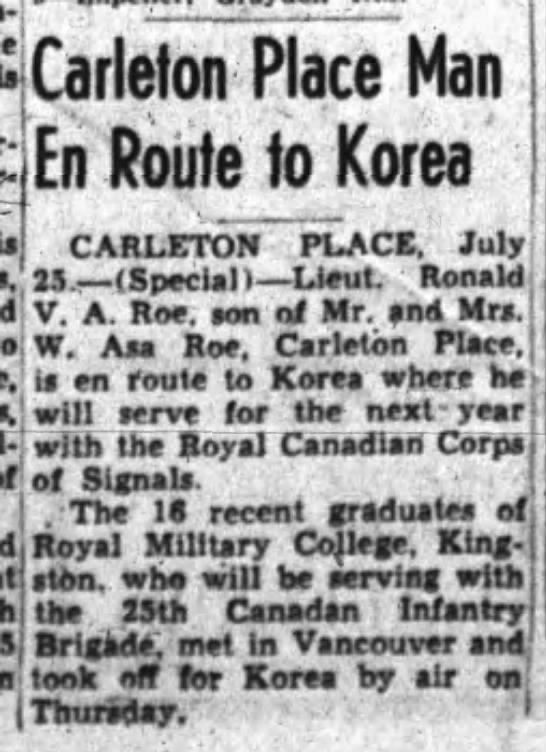 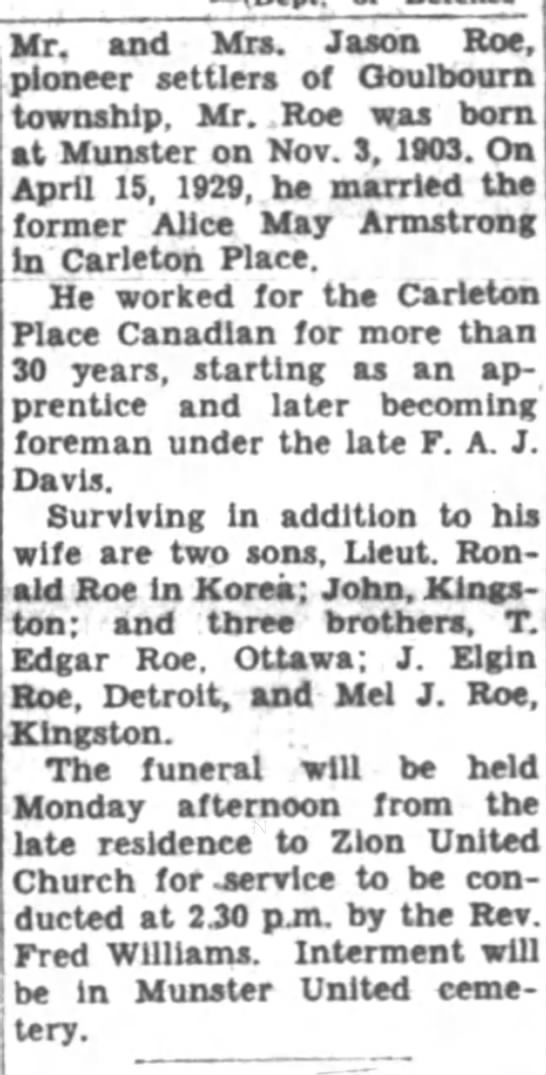 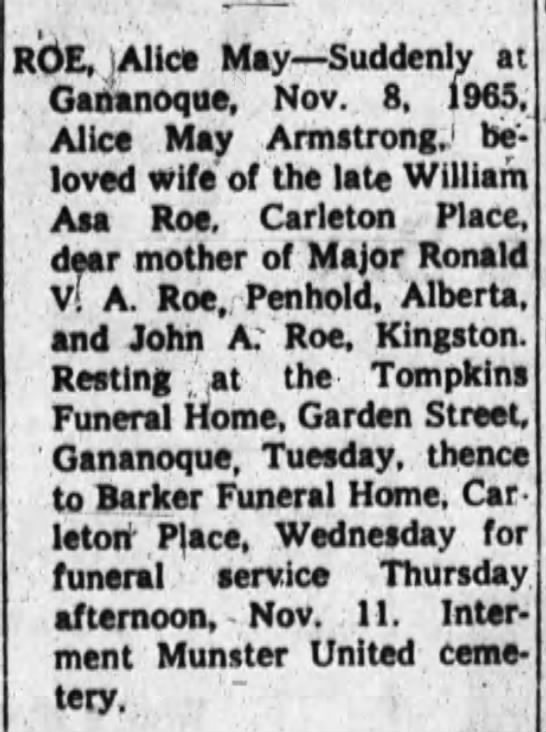 Identified on back of photograph as Doug Guerard, may in fact be Ken Cook (as suggested by childhood friend, Ron Roe)– donated by Rev. Worden to the museum.-A Tale From Gordon Henry Worden