Thanks to the collection of Lucy Connelly Poaps

Did You Ever Notice This in Beckwith Park? Thanks to Gary Box

I was going thru some of my junk and re-discovered this item. I just now realized that this is possibly a Christmas gift to a teacher. The interesting part is that while this is a not so interesting pattern, the manufacturer was of some importance and would have been fairly expensive to purchase. As you can see this would have been purchased shortly after the start of WWII and to that extent someone (the storeowner, purchaser) loved the bowl but not the fact that it was made in Germany and so obliterated that fact. I have googled both names but drew a blank. I haven’t heard of this practise or seen some such as this before. Perhaps it was a normal practise at the time. The mark is that of Reinhold & Schlegelmilch, Germany with the “Germany” portion covered up.

Has anyone seen this before??

Thought you might like a better photo! I don’t know what he/she used to print on the plate but it is obviously permanent ink of some kind-no markers in those days?Larry

Ehrhard Schlegelmilch operated the factory in Suhl, and during this period, most of the pieces exported to the United States bore the “RS Prussia” mark stamped in red. Arnold Schlegelmilch started a factory in Tillowitz, then Germany (now Tułowice), Poland. In 1910, the Tillowitz factory began using the “RS Germany” mark stamped in green. The Tillowitz factory kept producing porcelain through the Second World War. The company was taken over by the Polish state in 1946 and privatized in 1995 under the name Fabryka Porcelitu Tułowice SA. The production in 2011 concentrated on sanitary and building ceramics including tiles. These two operations produced the majority of their products for export beginning in 1892 until the beginning of World War I.

For almost 100 years, 1869 to 1956, Reinhold Schlegelmilch’s initials, RS, appeared in various marks on fine German porcelain. Probably today’s most desired pieces are those marked RS Prussia. Rare blanks with rare decorations, such as animals or portraits, of RS Prussia can bring $3,000-$8,000. More common floral pieces have routinely sold for $75-$350. Other sought after marks include RS Germany, RS Suhl, and RS Poland.

Due to it’s higher value, the RS Prussia mark has been forged and copied since the late 1960s . New RS Suhl appeared in the early 1990s, and now, in 1998, RS Germany and RS Poland are being reproduced. This article will review the new and forged RS marks and compare them to original markings. It will also look at other ways fakers attempt to enhance or imitate RS porcelain. Read more here click

Gwladys Williams Menzies– Celebrating a Local Girl who Made Good 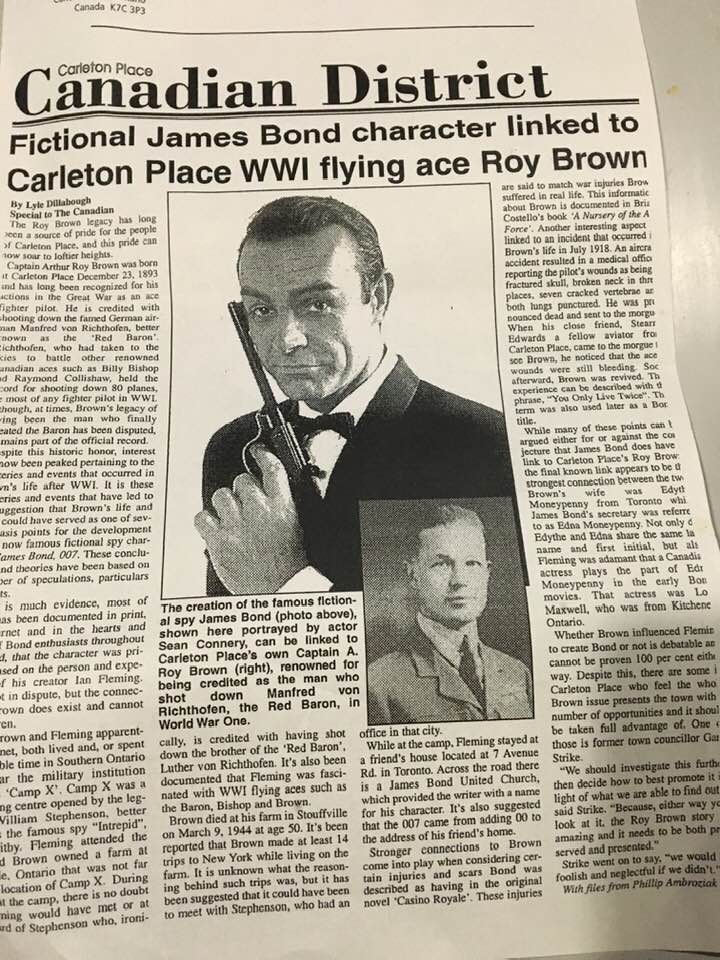 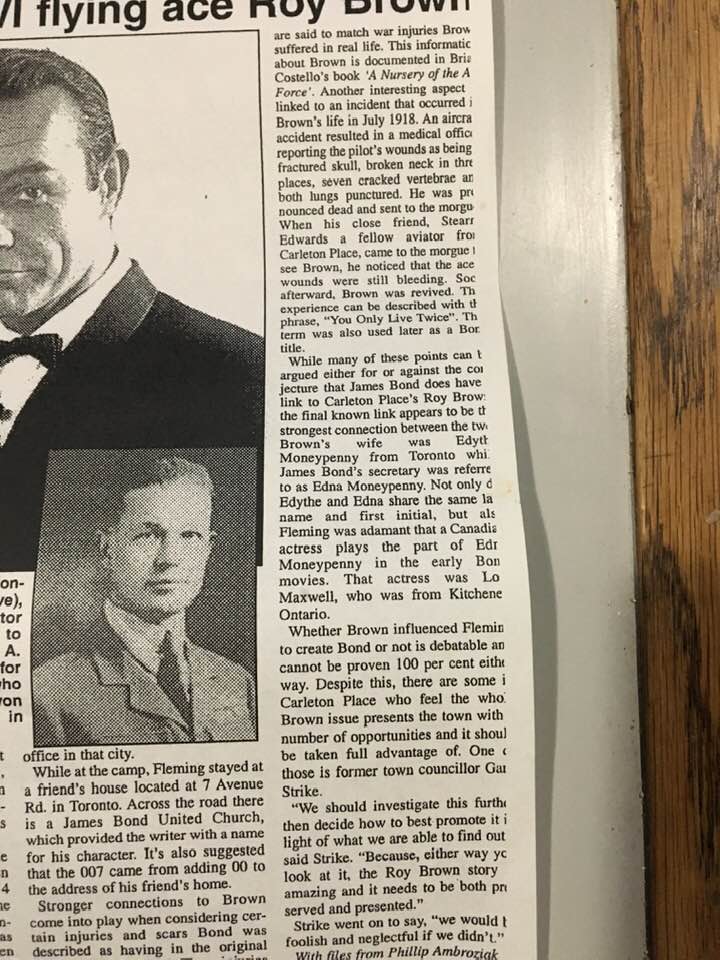 Was Roy Brown Looking for the Red Baron at the Museum Last Night? Photos 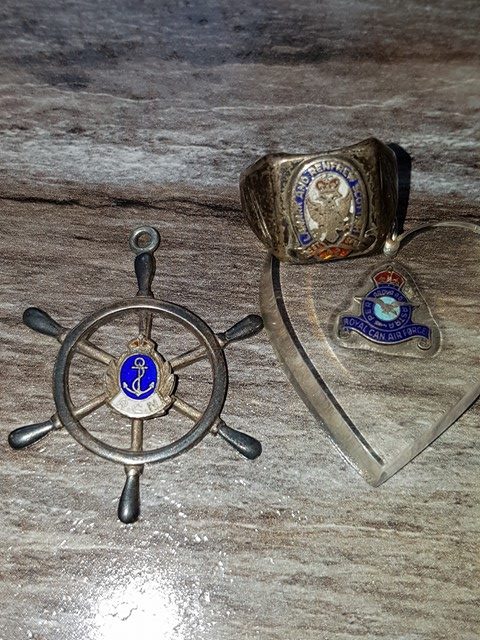 Linda did you see this pic. I remember you mentioned the Scots Regiment. This ring I have looks like it was something they may have worn ?

Just a line to let you know I’m O.K. Received your 2 air mails & was it ever swell getting them.
I never in my life enjoyed getting mail as it did when I got them, along with a couple from Glasgow and one from Mary Caldwell.
I bet there was quite the excitement the day we landed, eh! I’d have liked to seen one of the papers.
This is the first chance I’ve had to write a letter, but hope you got the 2 cards I sent. Tell Dad to hurry & get the boat fixed up because we hope to have this job done in short order & I’ll be home before you know it. And don’t worry because it isn’t so bad as you’d think. So long.
Love to all the family.
See you soon.
Don

The beaches of Normandy corresponds with the dates

Hurdis–isms–How A Man Who Broke Leg of Chas. Bollinger’s Cow Was Caught

In Memory of H. Albert Hurdis

Hi Linda,
My uncle Leonard McNeely from Carleton Place, ( man in middle unknown) and Dad Gordon Willard Stewart on the right. Taken at my grandparents farm near Carleton Place, in 1939.
Thanks to Hazel Stewart Huneault 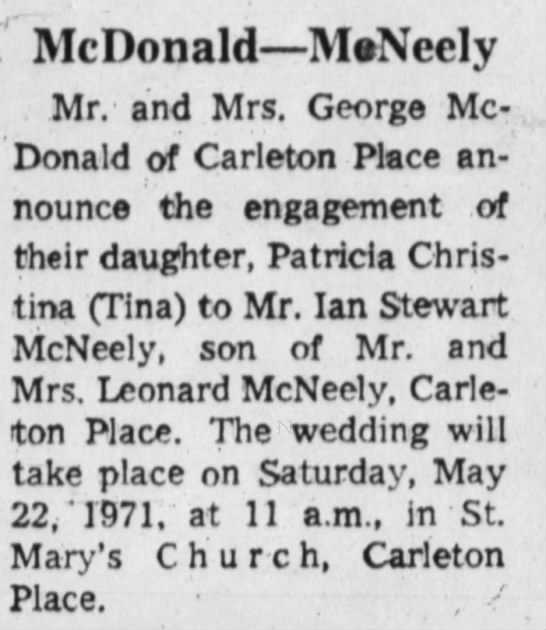 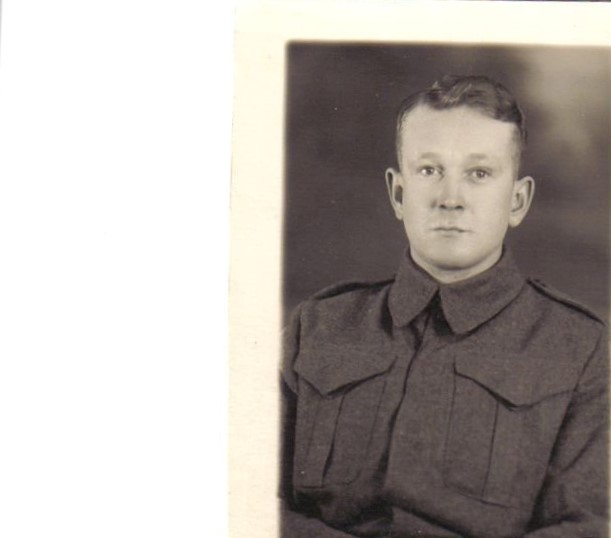 Thanks to Hazel Stewart Huneault we now have a record of Private Gordon Willard Stewart World War 2 Veteran. Her Dad was from Carleton Place and with the Cameron Highlanders of the Ottawa Unit.

Hazel has sent her father’s picture, his soldiers pay book and a letter home. (1944) 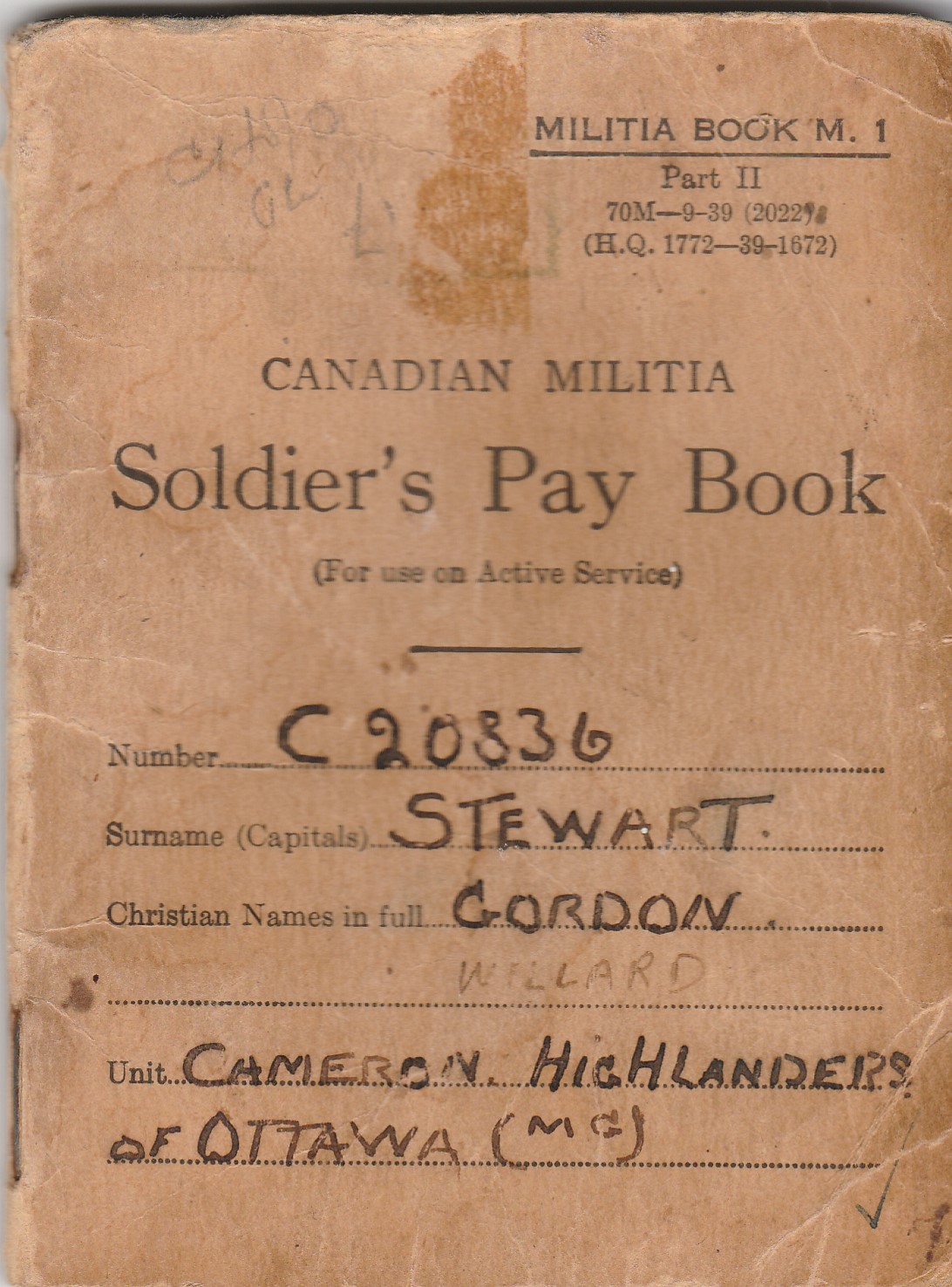 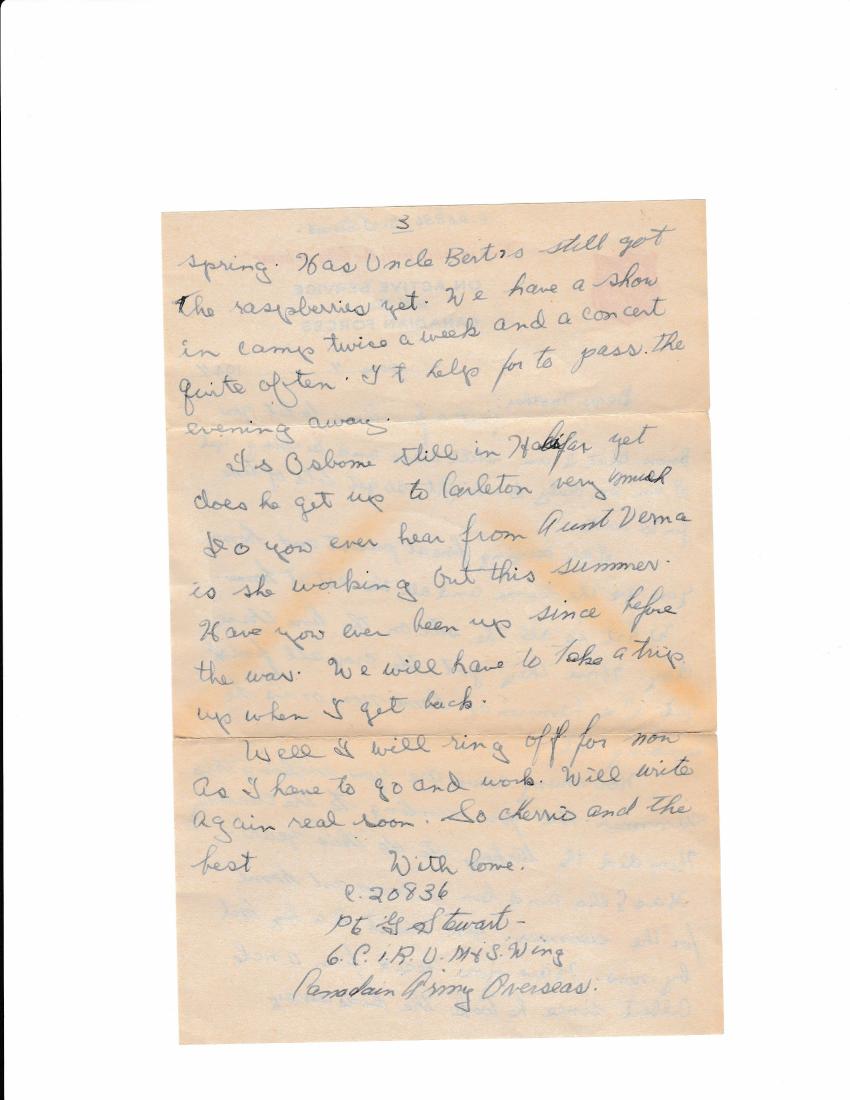 Not only were children sent to Canada and other countries as British Home Children– but *others were sent away from home during the second world war. I guess it was a way the parents thought they could protect their children from the atrocities of war.

For the less well-off or well-connected  families; their chance came starting on 19 June 1940 when the UK government, responding to grassroots offers from the Empire, announced a plan for evacuation of children to Australia, Canada, New Zealand and South Africa. The announcement read that “a total of 20,000 could be sent off immediately, of which 10,000 would go to Canada.”

*”I was put on a train with a ticket around my neck at four years old in charge of the guard bound for Northhampton away from the bombings. My older brother went thru the same experience. My mother tells me she was bawling her eyes out at the train station while she put him on the train, with a ticket round his neck, and sent him off to nowhere that she knew. But she did it to keep him alive – which is what parents are for. The “authorities” had no idea where he was for 4 yrs until he was returned. My mother didn’t know if he was alive or dead.  You do what you have to do”.

There were some children sent to Lanark County and some in Carleton Place were under the guardianship of Hilda Martin in possibly 1942 or 1943 at the Gillies home at the corner of Bridge Street and Townline.

Unfortunately some did not make it to Canada and yesterday I found an account of those children that perished at sea. History is not always smiles and chuckles, and since I did not know about this- I had to write about it.

The date was September 17, 1940, and it was 10 p.m. in the middle of the North Atlantic. Already 600 miles out to sea, the SS City of Benares was carrying 90 children being evacuated to Canada to escape the effects of the Blitz and they could wait out the end of the war in safety.  They had all been told to get into their pyjamas as the captain thought they were safe from any danger and had even congratulated them all at supper that very night.

However outside in the dark of night there was a storm raging and a Nazi U-Boat had been following the S.S. City of Benares. The torpedo hit the centre of the ship and immediately all lights were extinguished. The sinking ship took on an immediate list preventing the launching of many of the life rafts and trapping numerous crew and passengers below decks.

As a result, many of the 400 people on board were unable to escape. As hundreds of survivors struggled in the water during the fury of a raging storm, the U~boat´s searchlight swept over the chaotic scene, before it left the area for good.

The survivors in the boats with the children only clad in pyjamas huddled in the life boats were not rescued for nearly 24 hours, as the nearest allied units were 300 miles away. In that time dozens of children and adults died from exposure, or drowned, leaving only 147 survivors.

One boat containing music teacher 41 year-old Miss Mary Cornish along with 5 boys and 2 girls was not picked up for a further eight days until aircraft spotted it close to the shores of Ireland. In total 255 people (including 77 of the evacuees) died.

While British parents mourned the loss of their children the British Nazi propaganda machine *Lord Haw-Haw  aka William Joyce had a field day with it.

The same nickname was also applied to some other broadcasters of English-language propaganda from Germany, but it is Joyce with whom the name is now overwhelmingly identified. There are various theories about its origin.