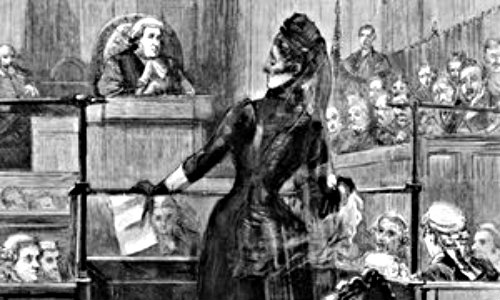 Christina/Christena Muirhead took the sisters to court and was successful in recovering all the real estate and chattels. All the McLeod sisters were left with after the court case were a bunch of blankets. Lawyers argued that it was a scene that had played over and over countless times  throughout the years. An old man verging on senility had the “wool blankets” pulled over his eyes by a couple of conniving and unscrupulous attendants.

These two sisters did not stop there. They also spread rumours that Christina/Christena Muirhead had poisoned her husband and then had her accused of murder. The trial was in Perth and upon opening statement the judge said to the lawyer,

“These two sisters say they heard you said that William Muirhead died from poisoning!”

“I did say that- it was poisoning from the infection following a leg amputation, but not poison given to him by anyone!”

The case was immediately dismissed.

Next story: Life in Beckwith

In our last instalment we left *Christena McEwen Muirhead with an unhappy marriage with enamoured William Muirhead. When William passed he appointed two executors of his estate: David Cameron and Donald McLaren. Christena was awarded guardianship of her three children, all minors, and she and David Cameron were authorized to sign a lease of lands and premises (the sawmill and mill site located in Carleton Place) to Peter McLaren of Perth.

The family never really knew the details, but  it seems either one or the other, or both of the executors, were accused of misappropriation of the funds of the estate– but the both of them ended up being dogged with very bad luck. Right or wrong, local rumours connected them both with dishonesty and family misfortune that followed.

In the November 18th 1887 Almonte Gazette there was a small article I found:

“It looks as if the Canada Lumber Co.— “Messrs. McLaren, Edwards & Co.—have made up their minds to allow their mills to remain in Carleton Place, as they purchased the site of the mills on Monday from the Muirhead estate, paying therefore the sum of $17,000”.

In the family documents it reads that an agreement of sale took place with Christina Muirhead et all to the Canada Lumber Co. November 11, 1887 covering sales of lots 124 and 137 in Carleton Place. (lumber yard and sawmill) It would take effect on the expiration date of the lease to Peter McLaren which he assigned to the Canada Lumber Co. May 20,1890 for $15,000. In my research there is some discrepancy between the newspaper and the family documents on the price, which is typical for the newspapers of the times. They never took the time to check-it was all about getting those newspapers out no matter what was said.

In those days a sum of money like that was a lot of money. Christena Muirhead owned a considerable amount of real estate in Carleton Place inherited from her husband, William Muirhead’s estate, and also from his uncles and aunts.

The Box family historian, Eddie Box, noted that when his grandmother died she left $400 to each one of his siblings including him– but they never received a cent. The trust company went bankrupt and there was never any doubt that more of his grandmother’s money left in its care was also lost. So is the continuing the tale of poor Christena McLaren Muirhead from Beckwith and Carleton Place– and next time we follow her journey with Daniel McLaren and his housekeepers. That is a tale you don’t want to miss!

*Christena McEwen Muirhead- Christina’s name was spelled several ways in the documentation by Eddie Box–Christina and Christena. No wonder it is so hard to find things these days as the spelling of names was changed on a whim by those who really didn’t care to check the facts.

1866 – This town’s first large scale business had its start in 1866 with the opening of the Gillies & McLaren lumber mill with thirty employees.  James Gillies (1840-1909) came as its manager.  Five years later John Gillies (1811-1888), who had founded the firm in Lanark township, removed to Carleton Place.  Both remained here for life and were leaders in the town’s industrial growth.  James Gillies for over thirty five years was head of the later widespread lumbering operations of Gillies Brothers, a position occupied from 1914 to 1926 by his brother David Gillies (1849-1926) of Carleton Place.

1867-A new sawmill was built by the Gillies & McLaren firm to employ up to a hundred men.

In 1871, John Gillies sold his original mill, and home, in Lanark Township to John and James Herron8, and in 1873 he sold his share in the Gillies-McLaren holdings on the Mississippi River and at Carleton Place to his partner Peter McLaren for $330,000, about $6,270,000 in modern value.   The McLaren Company saw mill at Carleton Place employed 50 to 75 men depending upon the season –-Peter McLaren Ron Shaw

Mr. Editor:  Having returned from California, and knowing you would like to have an account of my uncle, Alexander McLaren’s death, I take the liberty of writing you a few lines on the subject.

Sir, having arrived in California and having travelled around for some time, viewing the country, we at length directed our steps to one of the mining districts called Foster’s Bay, on the Yuba River, distant 32 miles from Marysville.  We had not been there eight days when I became unwell, being laid on a bed of sickness for 5 weeks, throughout this period my dear departed friend watched over me with more than a nurse’s care.

Providence was restoring me to my strength, but new troubles were awaiting me of which I was unconscious, for just as I got up from my bed of sickness for the first time, and being scarcely able to stand, he that was dearer to me than any other in that far foreign land, was visited with sickness, and frail as I was, Providence enabled me, in turn, to administer to all his wants, the same doctor that attended me (Dr. Fitch) attended him also, he used all of his endeavours to restore him again to health by administering to him medicines that he felt fitted his complaint and which he called inflammation of the bowels.  (Appendicitis)

But after having passed through a course of medicines, it had no affect whatever, the doctor being baffled in his attempts to restore him; called in another doctor for advice but by this time it was evident to me that the fell destroyer was fast gaining power over him, he gradually became weaker and weaker until, on the morning of the 7th September, (the day on which he died on or about 12 noon), his breathing became more quick and heavy.

I had some conversation with him in the course of the morning and about ten minutes before he breathed his last, I put to him some questions which he answered satisfactorily, and proved a comfort to me in my weak state, and enabled me to believe he died putting his trust in God.  On the following day I was enabled with the help of a few friends to commit his body to the silent grave, where he now lies deeply lamented by his sorrowing and bereaved friends and where he will lie till the last loud trumpet shall sound to awake us to our judgment. He having been personally acquainted with you and with others in your immediate neighbourhood I seek to add no more.

Birth, in Beckwith, on Saturday the 13th inst., Mrs. Wm. Muirhead of a son.