Middleville & District Museum  Photo- Have you been there? Click here..

William Morris emigrated to Rosetta, Ontario as a young boy with his parents where they made a life for their family on a homestead like other settlers that came to this area. Their former neighbour, Alex Crichton, back in Glasgow, Scotland, missed the family and regularly exchanged correspondence, first to to the parents, and then to young William.

Alex ended up coming to Rosetta one summer, and loved the area, but he found the stillness of the night almost painful. We don’t know how William became enthralled with the violin, but because of the fondness between the two men, one must assume Alex encouraged him to play it. William later ordered a violin from Alex Crichton and Alex encouraged William to study hard so he could share the sound of Scotland with his neighbours, some who had no clue to what they were missing as they had never visited the grand old homeland filled with the scent of heather and the sounds of song.

Middleville & District Museum  Photo and Claudia Smith- Have you been there? Click here..

This violin was like no other, because William had sent the violin maker in Glasgow a block of cedar for part of the violin in 1897. Chrichton’s seafaring son who was visiting Rosetta took it with him on his journey but he failed to register it on the ship’s list so it was sent back to Montreal and then back to London. Due to dock regulations ghat block of wood crossed the Atlantic not once, but three times, until it got to the hands of its maker. But, by the time it arrived in Glasgow, the wood had dried so a new block of cedar was cut and resent.

Alex combined that cedar with fine maple, and in 1900 written news came back to Rosetta that the back of the violin had been made out of  bird’s eye maple. The Scotsman had made the breast in cedar as promised, and when it was completed it was tested by a famous Perthshire violin player who claimed it was a capital instrument.

At this point in time Alex Chrichton was 83 years-old, and this was the very last violin he ever constructed. The most joy Alex had in life was making his violins and the music from his violins reached the centre of people’s souls in Scotland and in Rosetta, Ontario.

Donna Mcfarlane— William Morris who owned the violin was the son of my husband’s great great grandfather William Morris (wife Catherine Struthers) who emigrated from Scotland to Rosetta..William Sr. kept a diary of his life before emigrating, the trip over to Canada, and the search for property. I believe this diary is in the Keith Morris family..(Keith being a grandson of Wm the violin Morris) Aunt Margaret Lowe (granddaughter of Peter Morris ) made a handwritten copy of this diary which I have..

Keith Morris of Carleton Place was the grandson of William Morris and that same violin  that was made by Alex Crichton and sent to Canada in 1896 is now safely in the Middleville & District Museum . 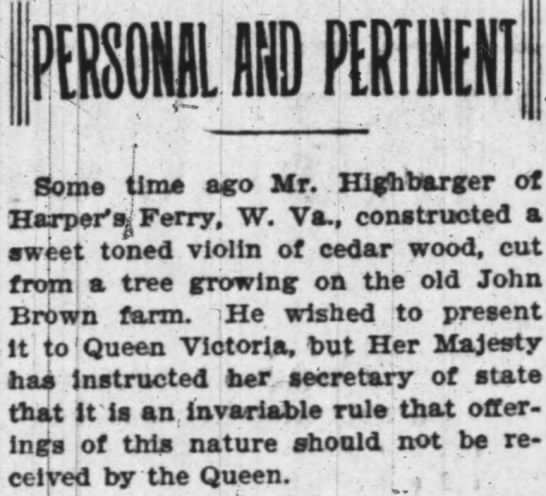 Tom Edwards Her name is Marion Campbell. Her brother was Andrew Campbell and I think she may have became Marion Erskine. I think she was my dad’s aunt or great aunt. Not sure. LOL I have become quite the historian.

Rose Mary Sarsfield-– But the message above is from Minnie Penman. Yes Marion Campbell married John A. Erskine. They are the parents of Johnnie Erskine and his sister whose name escapes me at the moment who married Tommy Edwards.

Max Sutherland— Rose Mary: the nickname “Minnie” drives genealogists to despair or drink. I’ve seen it borne by daughters whose birth names were “Mary”, “Minerva”, “Marion”, “Marissa”, etc., etc., etc…..But I’m convinced that Minnie Penman was born “Marion” Penman in 1870, d/of Archibald and Margaret Penman of Dalhousie. By 1891 she’s listed in the census as “Minnie”. She seems to have married after 1891, and may be the “Minnie” shown as married to Archibald McNicol of Dalhousie in the 1901 census. Your best bet? Ask Irene Spence. What Irene doesn’t know about Dalhousie isn’t worth knowing. Hope this helps.

Rose Mary Sarsfield-– Thanks Max Sutherland! See where this stuff leads to Tom Edwards?? Elizabeth Coates i believe we found an answer

Middleville & District Museum  Have you been there? Click here..