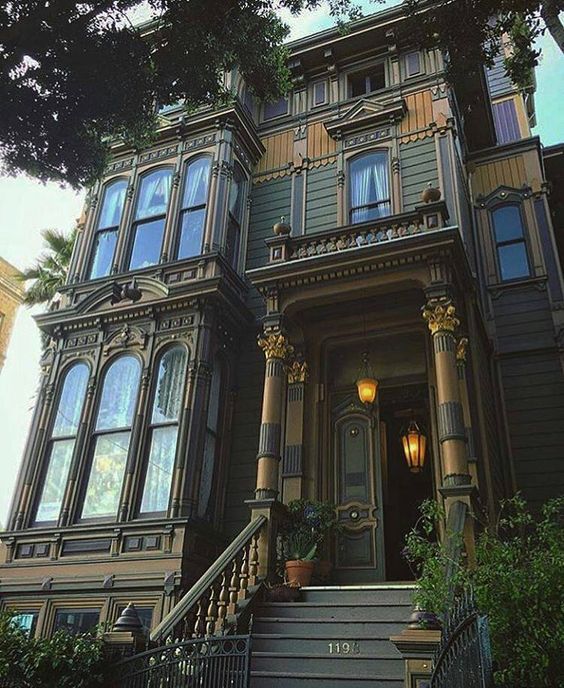 Author’s Note–This was written for a San Francisco publication a few years ago. They wanted an interesting way to tell the history of the beautiful Westfeld home and this is what I wrote about a house I loved.

Once upon a time I sat outside a beautiful Gothic Victorian house and leaned carefully against the metal fence. My friend’s cousin lived in this creepy looking home on Fulton Street in San Francisco and I had been dragged along for the trip. While she went into what I called the ‘Addams Family’ house to get some much needed cash, I just sat there and stared at the house.

The ‘Addams Family’ home was really called the Westerfeld House and it was decaying quickly from being the grand place that it once was. The home was initially built for William Westerfeld, a German confectioner and baker in 1895. It was now 1965 and I had run away once again from my grandparent’s in Seattle Washington. I had doubted my sister and I would ever be invited again after my Beatle incidents in 1964 but they had decided to take another chance on me. That was a nothing but a mistake.

I really did like this house and as I sat on the grass I looked up at the sky and wondered what would have happened to me had I lived in it. Apparently after Westerfeld passed away it was sold to John Mahoney, who had built the St. Francis and Palace Hotels after the 1906 earthquake. The house would go through so many changes through the next century it would boggle the mind.

As I drifted off while strips of fog float through the sky I dreamed I was back in 1920.  I watched Harry Houdini night after night in the tower room while he tried to send telepathic messages to his wife across the San Francisco Bay. Houdini quickly vaporized me out of anger and I have now become the mistress of one of Czarist Russians that had bought the home in 1928.

Every night I would dress up in my finest Deco clothing and hang on to my Russian lover arm while he toured the former ballroom and watched the patrons. They had opened a nightclub and he had called it Dark Eyes after the Egyptian kohl that I rimmed around my dark brown eyes. I saw myself smoking from a long black cigarette holder and, all of a sudden, I am pulled into the thick smoke and it is now 1948.

The ballroom of the house has vanished and it has now become an apartment building where jazz music pours out of every room. I am now sitting on a bed listening to John Handy, who is tenderly playing “If We Only Knew”. I watch his lips curl around his saxophone and know they will soon be kissing mine. I am now with child and hopefully will have a boy who will carry on his name.  I begin to go in labour and as I let myself float into the fog of pain I am no longer there – I am now suddenly part of the Calliope Company and hear Tom Wolfe tell me he is going to write a book called “The Electric Kool-Aid Acid Test.”

It’s now 1965 and I am part of the first hippie communities in San Francisco. I spend my days doing LSD and dream of travelling in the psychedelic bus that Tom has talked about, called “Further”. I am told to document whatever I hallucinate about but I cannot seem to hold anything in my hands. My words are gibberish and I see spaceships but I smile because I have passed Ken Kesey’s acid tests. I am no longer part of the Beat Generation, I am now a proud hippie.

As I lay there and watch the strobe lights bounce off the walls I blend into the fluorescent paint in the posters and become part of this decaying giant. A man called Bobby Beausoleil is shaking me and trying to get me to meet his friend Charles Manson. It is now 1967 and instead of the reality of being at Montreal’s World Fair I am having a disagreement with Bobby. Bobby and Anton LeVey are making a film with Kenneth Anger and Mick Jagger is coming to do the music for the film called “Lucifer Rising”.  Bobby is not getting along with Anger and wants me to come with him as he has had enough with the production of the film.

I refuse and Bobby leaves me and runs off to find Manson. I later read in the news that he kills music teacher Gary Hinman on July 27, 1969, and will rot forever in jail for his crime. I am relieved I did not go with him and instead I still live in the house and design posters for the Avalon Ballroom with the Family Dog.  Janis Joplin becomes my friend and I tell her everyday until she dies that she will always have a piece of my heart.

Continuing to fade in and out of time I see that one day the house will be restored to greatness under the hands a man called Jim Siegel. He will live there with a group of long-time friends and everything will come full circle. Large rain drops wake me up and I shake off the deep sleep as I watch my friend walk down the front stairs. She was unable to get any money so we will walk for 30 minutes until we reach The Fillmore. Hunger can be calmed down with the free apples they give away. I think to myself and realize what day it is. It is Monday; just another manic Monday.

“Six o’clock already I was just in the middle of a dream I was kissin’ Valentino by a crystal blue Italian stream.” -The Bangles