It was a wild and woolly week in Eastern Ontario last weekend, and as I write this some folks still do not have power in our area. As I looked at the forecast last Saturday morning for a Royal Tea at noon I never expected the line of storms headed our way would soon strengthen into Canada’s first derecho in decades. This particular storm did nothing but wreak havoc across Ontario and Quebec. It was the strongest derecho storm in Canada this century, blasting Ontario and Quebec on Saturday with winds peaking at 190 km/h in Ottawa, killing at least 11 people.

Years ago as a child I used to sit on top of a pile of lumber at Dion’s Lumber yard next door and watch what everyone called “heat lightning”. I don’t see it anymore and wonder why, and then I learned that there is really no such thing as “heat lightning.” What we were actually seeing was flashes of light reflecting off of clouds from lightning in a distant thunderstorm.

When lightning was heard overhead things would shut down in our house. We had to turn off the television and close the venetian blinds so the lightning would not wrap itself around them. To those that thought the latter was an old wives tale– it wasn’t. I saw it happen many times. So, we were all told to sit still in a chair with very little physical movement like the 2013 film Don’t Move. I was sure that if the lightning hit it would accidentally unleash a demonic force that might rip our family apart. So, my mother rattled the piano keys at thunderous levels playing Glenn Miller songs while the storm raged on.

Meanwhile down the street some of my friends were not allowed to wash dishes or take a bath because lightning could travel through your pipes. Using any part of your home’s plumbing was a risk during an electrical storm. Fireballs had been seen flying out of faucets, and you didn’t dare get near electrical outlets. My Mother sometimes used to open all the doors and windows to let the thunder ball out if such a thing decided to go down the chimney. Her cousin had been struck by lightning, so I suppose she held that fear all that time.

If you were in the basement during a storm you better not be barefoot according to my Grandmother, or you would get shocked. It was due to some story about our Cowansville, Quebec water reservoir being built over an active spring. I held whatever I needed to hold until after the storm as the lightning was supposed to come and rise up through the toilet and tickle your backside, or something like that. Take off any clothes that had zippers because the metal attracted lightning and hiding under your bed should be a last resort, as box springs were metal. It’s a wonder we weren’t all on “happy drugs”!

Talking on the phone was a no no as lightning travelled down the wires and the crackles on the phone line could make you deaf. One storm had supposedly fried all the phones on South Street, but no one had ever admitted their phone had been totaled, but the local folks still believed it.

Hanging out at the park was forbidden during a storm as you were made to get out of the pool instantly if anyone heard a rumble. Of course the person that began this rumour was the same lady that told me I couldn’t go swimming after eating because I would get cramps and drown. That lifeguard had heard that little bit of advice from our Mothers that brought us there, and she didn’t want to get in trouble with them.

My Mother used to tell me that her Mother used to draw the sign of the cross on the window glass and mirrors in the house, and also on her forehead, to prevent the strike of lightning. All I could think of was that she was mixing up religion with lightning rods, and I still say a church that has a lightning rod is truly a lack of confidence.

The odds of being struck by lightning in your lifetime are 1 in 12,000, but scientists say climate change may increase the chances to about 1 in 8,000 by the year 2100. That’s fine I won’t be alive by then, but I do ask that others make the right decision about not getting struck by lightning. Could all those Mothers and Grandmothers be completely wrong with their stories? Remember, the road of life is paved with a lot of flat squirrels that couldn’t make a decision.

Hit By Lightening— The Sad Tale of Henry Crampton

After researching online this afternoon I have come up with these two storms in the time frame of the picture. How bad were they? Memories? 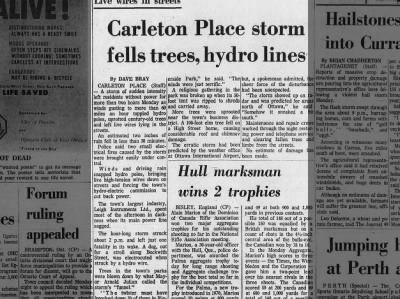 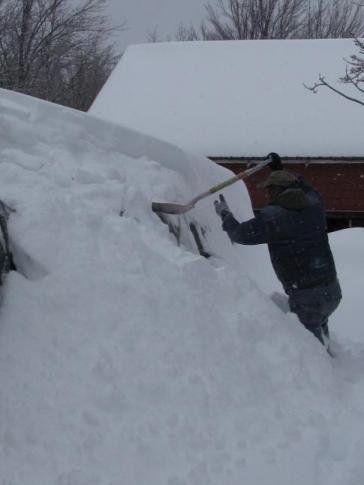 The weather gods are predicting another powerful weather system that is now sitting in some remote bar in the Rockies. The storm dumped more snow in the mountains and up to 10 inches in some parts of midwest is on its way. The weather whisperers have also spoken – it will move east.

My friend Wanda just emailed me at 5:45 am today. There is another snowstorm today in Arkansas and she will not teach as the schools are closed. They were also closed for three days last week.