In one week the trees came down.

In one week more small animals came into town looking for food and shelter. Everyone has been talking for months about the increased sightings of foxes running through town. The picture above might be a reason why. Of course I am the first to admit I could be wrong.

The Bobolink birds nesting areas in the park have allegedly been bothered, and I also wrote about this yesterday.  I have furious citizens emailing me upset about the proposed waste water sewage pond in Roy Brown Park. I have heard lots of talk, but so far, I believe no deal has yet been made.

Have you read Mark Smith’s posting about the proposed pond on carletonplace.com? You are not going to be happy when you read it.  Listen people, I can’t do anything but you can. Come to the town council meeting tomorrow night- email, or call the powers to be. Voice your concerns. Take a look at the map for proposed housing. Do we need this much housing–517 proposed homes? Or does anyone really care– and do we just carry on?

I guess for the first time I just don’t know what to say. I am more than gobsmacked. Please let’s do what’s right or remember for next time.

At tonight’s Town Council meeting a member of the River Corridor/Urban Forest Committee will be or hopes to express concern that the Town is permitting the developer who bought Bodner Park, to relocate a storm water management pond (swamp) from their construction site to that of adjoining Roy Brown Park. If it goes ahead, the proposed storm water management pond will be built too close to our river and, if it overflows, go into the river which is upstream from our drinking water. Direction #127243 from the Planning and Protection Committee to be voted (and passed) at tonight’s council meeting. Public Park land sold out to a housing development.

Does this explain where the trees went?

Are we in Neverland? Concerns from Carleton Place Citizens #1 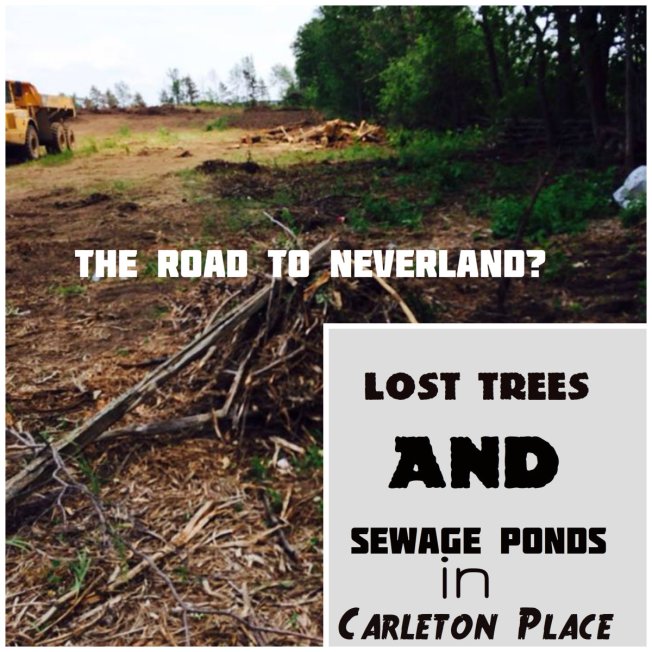 I got a few emails from concerned citizens the past few days so I decided I would write about their concerns together.
Email from Concerned Citizen-
I must have been in Neverland for awhile, but today I noticed all the trees gone from the wooded area on Highway 7 between Mississippi Road and the Mississippi  Valley Conservation Authority. I mean totally gone–then I remember someone on Facebook saying 200 maple trees had been decimated to the upset of many birds and small animals but didnt know what it was about….Do you know ….I assume a new housing project????
From what I can see the developer has gone in and has started blazing their road network, and unfortunately this seems to be allowed. As part of an approved development, plans for tree preservation are usually required, but there seems to be no officially approved plan, so they can do whatever they want.
I believe this happened before when another developer did it three years ago with its pending development North of Wall Mart. As no agreement for tree preservation was signed off they could cut down as much as they wanted.
If, however, any of this cutting is on TOWN OWNED property I would hope that some serious questions are posed. Each tree matters, and developers should be under serious scrutiny —so much so, that the loss of even just a handful could wipe out an entire species of flora and fauna forever.
New research encompassing some 50 studies worldwide shows that cutting down even just three to four trees per hectare of primary forest already results in species loss, changing ecosystem services (i.e. nutrient cycling), biological resources (i.e. potential sources of medicine), and social benefits (i.e. recreation through birdwatching and hiking) provided by forests. I understand we need housing- but let’s work together with a tree preservation plan. If you think this is all hogwash-read my blog I did this week when three maples on my property were cut down this week due to decay, I was shocked how it affected the birds in the area. 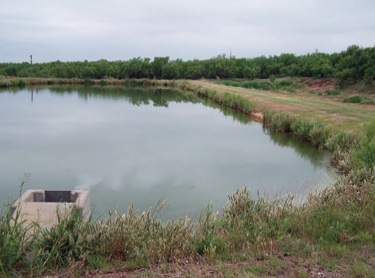 Photo of another pond-Google Image
Another email asked me if it was correct that a developer was putting in a proposed waste water sewage pond in Roy Brown Park. I have heard lots of talk, but so far, I believe no deal has yet been made.
So what’s a waste water sewage pond?  Stabilization ponds (also called lagoons or waste stabilization ponds) use a natural process for wastewater treatment that employs a combination of macrophytic plants, substrates and microorganisms in a more or less artificial pond to treat wastewater. The technique is frequently used to treat municipal wastewater, industrial effluent, municipal run-off or stormwater. After treatment, the effluent may be returned to surface water or reused as irrigation water (or reclaimed water) if the effluent quality is high enough.
I realize water from these sources are used to irrigate golf courses etc.–but do we really want one on our nature trails in the park? It’s not up to me to decide, but NO ONE should ever give up the good fight for a good cause.  Without active citizens our world would be a much less just and humane place.

This was posted on the CarletonPlace.com portal