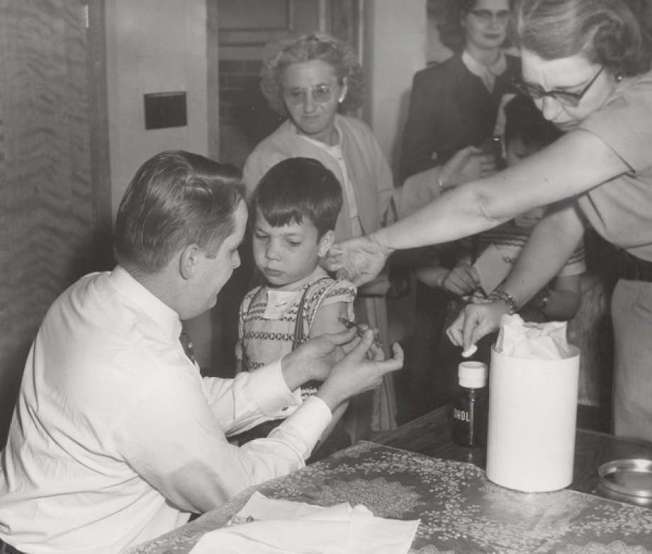 I have a mark on my upper arm that has never gone away in 65 years. Each time I look at it I remember going to the Cowansville, Quebec town hall and lining up to get vaccinated for Polio. Needles were not the dainty things we have today, and the oversized needle coming at me is something bad dreams are made of.

In those days you were told not to remove the ensuing arm scab or “great harm” would come to you. In fact, even more harm was supposed to come your way if you visited friends or went to birthday parties. Unless you were born before 1955 none of you will remember this reign of terror.

Polio had no cure then, and towns and cities were busy quarantining areas. Nothing seemed to work and some of the people in the Cowansville area did not have the money to care for a family member. In an attempt to control polio the old archaic rules came out: no open drains and have your Dad put those screens on the windows before something unholy came your way.

Posted on signs everywhere was: “Wash your hands, and have a bath every single day”. We were told also to stay away from crowds, and yes, more importantly keep the community public pools shut. Schools were closed and the Princess Theatre closed down on the Main Street. No one ever really found out how polio was spread, but basically if you didn’t clean your hands properly after using the bathroom that was a big one. For years doctors made you feel it was your own fault if you got polio.

I can’t remember anyone hoarding anything but parents really began insisting about the danger of swimming in pools, or lakes. A study showed that chlorine was actually one of the few known chemicals that could attack the virus. When all the public pools started using an effective level of chlorine, most of the epidemic ended overnight.  If they had only had realized that polio was inactivated by chlorine, as well as by heat and formaldehyde which was the chemical used to inactivate the virus in Jonas Salk’s polio vaccine. Once they found a vaccine that proved to be effective against it, polio basically went away.

Now COVID-19 is suddenly a real threat and we are going through almost the same panic scenario as we did with Polio and other infectious diseases of the past. Instead of staying out of pools, we are essentially hoarding masks, hand sanitizers among other things and toilet paper shelves have been emptied across the world.

I have no doubt that come sort of  vaccine will be developed in the near future and unlike the first polio victims WHO has said a vast majority of coronavirus patients will recover. I know as a child I was petrified watching the news or listening to my parents talk about polio. But we need not to panic and to remember that your grandparents and great grandparents were called to war —– now we are asked to sit on our couch. We can do this.

Doug McCarten–I do indeed remember! Although the polio vaccination came too late for me as I had it at 2 years old! Apparently I was within 24 hrs of paralysis…..when I was getting better, I have a vivid memory of visiting the patients who were in Iron Lungs and talking to them in the mirror attached above their head! The room was lit only by the afternoon sun but with the curtains pulled so the light that did enter was muted….

Fear and Loathing of the School Inoculations

A Tale of Two Women

For the Love of Laura Secord — The Rest of the Story

What Do You Do if You Just Can’t Walk Right In?