Carleton Place’s “Turtleman” Paul Keddy.. Clipped from The Ottawa Journal, 20 Apr 1970, After I found that out I had to keep digging and boy did he make Carleton Place proud..

Conservationist Paul Keddy, 16, a student at Carleton Place High School, is “concerned about the threat of extinction man and his ecological bumbling pose to so many species of wildlife.” ‘ So Paul is doing something about it. His exhibit deals with the evolutionary adaptations of turtles to their different environments, but Paul isn’tworried about the turtles’ ability to handle purely environmental difficulties. “It’s man. They’re helpless to protect themselves from man.” And since the only way to protect the vulnerable species from extinction is to hatch their eggs in the safety of a predator-free area, Paul is doing just that. So far he has achieved 95-per-cent success incubating eggs he has collected. (The turtles in the Carleton Place area can heave a sigh of relief.) Legislation needed Dr. Richard Vockeroth, 41, an entomologist with the department of agriculture and one of the judges of the fair, agreed with Paul that there was an acute need for protective legislation if an ecological balance was to be maintained. “But you can’t legislate a habit of mind and in the final pinch that is what will have to be developed,” Dr. Vockeroth said. 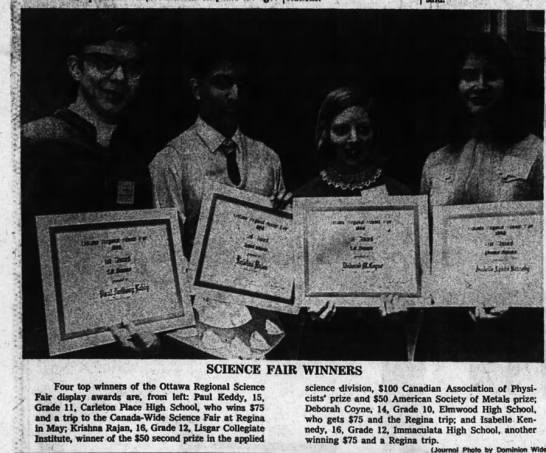 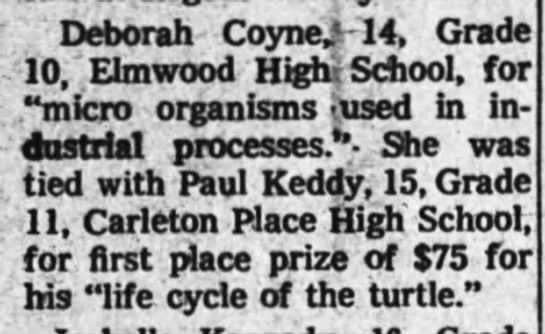 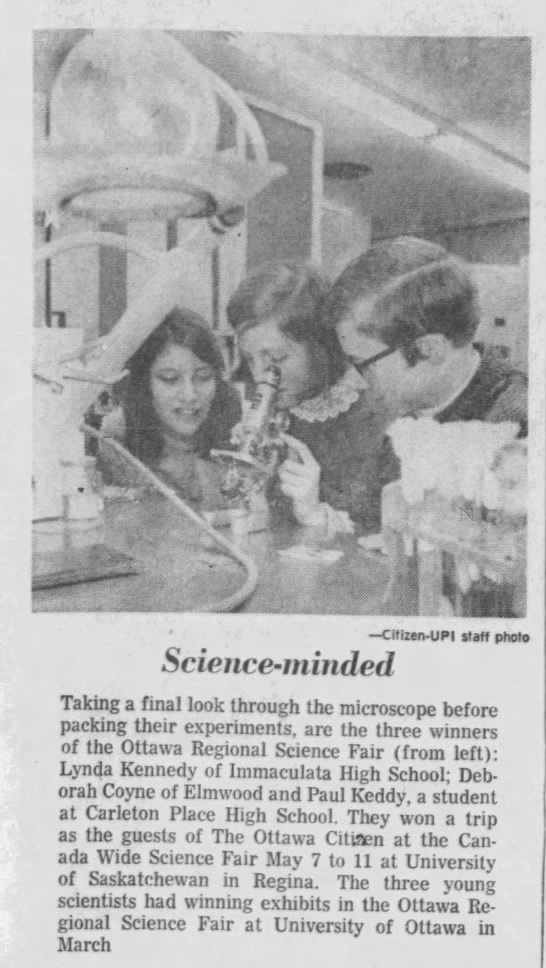 With people stuck at home and worried about their future, there is no better time to remind ourselves of the wonders of spring. The change of season is all around us with many facets of backyard biology, perhaps even things your kids might want to learn. In Part Two of the Science of Spring, Tom Spears looks at ways to engage your out-of-school kids with the great outdoors. Paul Keddy is a former University of Ottawa biologist and nature lover, and this spring a neighbour asked him what the kids could learn at home while schools are closed. He came up with a simple lesson plan, involving easy trips outdoors to explore, and all of it is adaptable to where you live. It’s based on his own family’s life. He and his wife, Cathy, live on a large forest-and-wetland area in Lanark County that they have preserved as a legally protected nature tract. “Every year, the Keddys keep a notebook of spring observations,” he told us. “We note the first appearance of each kind of bird, first flowers on red maple, first day the pond is ice free, first frog calling, et cetera. “It keeps us aware of our surroundings. Usually, there is something new each day. “Perhaps families with children could keep a wall chart showing similar spring observations. Or adapt a wall calendar. When our children were young, we used to put a chart on a big sheet of bristol board.” Suggested things to watch for: (you can personalize this list based on your neighbourhood) ■ First robin seen ■ First robin heard singing (add more common birds if you wish) ■ First day the lawn has no snow ■ First spring flower (or, first garden flower, first trillium, first trout lily, etc.) ■ First earthworm ■ First beetle ■ First mention of flooding in the news ■ First geese overhead ■ First mosquito ■ First frogs heard The Keddys’ home is surrounded by frogs, and di erent species don’t all start making noises at once. The first “would be wood frogs, spring peepers or chorus frogs,” he said. A footnote: The red maples he mentions have, in fact, green leaves. Their flowers are also green, but more pale than the leaves, and the flowers come out first. Last year, the Keddy family’s spring notebook contains these entries, among others (last March was colder than average, with a deep snowpack, so this year’s spring events may be earlier): March 19: First red winged blackbird April 17: First spring peepers, first wood frogs April 22: First spring flowers (bloodroot, Dutchman’s breeches and hepatica) Bruce Di Labio, a prominent birder in this region, says many spring birds have already arrived, from the big Canada geese down to little tree swallows, small and acrobatic flyers that pick insects out of the air. Snow geese also are passing through outside the city. People have even seen great egrets — heron-like birds that have only nested here since 2010. There’s a guide to Ontario wild flowers at ontariowildflowers.com, with a special section on spring flowers.

What did Paul become? Paul A. Keddy (born May 29, 1953 in London, Ontario) is a Canadian ecologist. He has studied plant population ecology and community ecology in wetlands and many other habitats in eastern Canada and Louisiana, United States.

Now they have given it legal protection as a nature sanctuary for 999 years.

Part is an outright gift of land to a conservation trust. Mostly the land can stay in private hands, but without the right to develop it — a crucial protection as it is close to fast-growing Carleton Place.

“If I’m going to be run down by a bus on Rideau Street,” Paul said, “I’ll lie there waiting for the ambulance and be able to say, ‘All the salamanders and frogs and herons and ducks are looked after.’ ”

He’s only half joking. Paul is the author of books on wetland conservation, and he and Cathy own 70 hectares of provincially significant wetland within the overal 280 hectares.

M Terry Kirkpatrick Linda I told a story of some work that Paul did in writing a letter to the Editor of the CP Canadian ca. 1970 in response to reports that CP kids were heavily involved in DRUGS (A kind of “Reefer Madness” thing). It was published as coming from me, at that time “Head Boy” at CPHS. Paul had written it and in Paul Keddy style had gone around gathering all the signatures, as they say doing all the “heavy lifting”. Only to have it credited to me. Maybe it’s still around. I also have a story about the campaign race for Head Boy in which Paul spoke immediately before me in the school auditorium.