Franktown Road in Carleton Place- see the carriages and a stagecoach on your left. Photo from the Edwards family collection at the Carleton Place and Beckwith Heritage Museum– read more The Last Stagecoach Driver in Lanark County …… 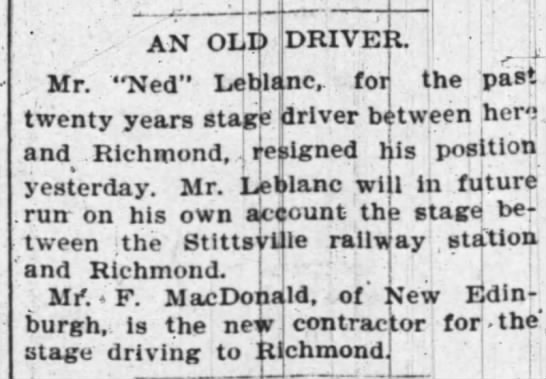 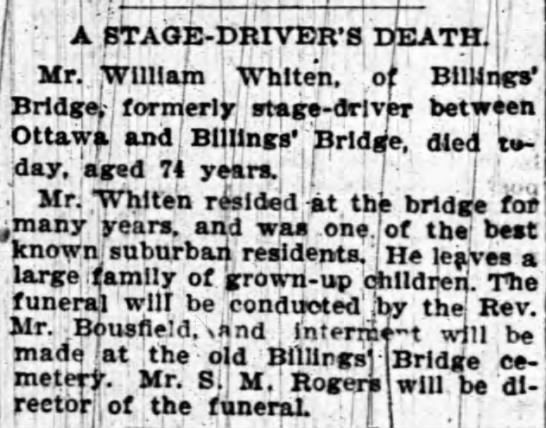 Perth Courier, October 6, 1899To The Editor of the Perth Courier:It has lately come to my attention that a misleading and utterly false report has been circulating about me on the 12th July last in Perth. First of all, let me say that I was not in the company of any man that day and also that I did not taste a drop of drink of any kind except a cup of tea for my dinner; and that I left Perth before 5:00 that afternoon on the Lanark stage and was at my home at Watson’s Corners before dark. If it was necessary for me to do so I could get fifty people to prove that every word of the above was strictly true. Thank you so much for your space.

There is certain relief in change, even though it be from bad to worse! As I have often found in traveling in a stagecoach, that it is often a comfort to shift one’s position, and be bruised in a new place

If you wanted to a direct line to Kingston by stagecoach you had better get yourself to Brockville, as the main stagecoach line ran from Montreal to Kingston. It was situated on the King’s Highway along the banks of the St. Lawrence where cars whizz by each other these days at death defying speeds.

You have to remember Morphy’s Falls, Perth, Almonte, Smiths Falls and other small towns  were fairly isolated with the closest large settlement being Brockville. The route to Brockville said some was like a large travelling wolf pack with as many as 200 wagons journeying along the roads each day. The road was narrow because of the trees and swamps, and it was literally more than just a trail through the dense woods.

At first, this was the only land route from Montreal to Kingston and in the winter it  really wasn’t that bad for travelling, but in the summer it was just awful. In low and swampy places round trunks of trees were laid to prevent the wheels sinking into the mire.

In 1837 a local Lanark citizen described his travels as “ A heavy lumbering vehicle reeling and tunblin along pitching like a scow among the breakers of a lake storm.”

When a bad spot was reached and had to be passed, travellers were frequently compelled to get off the stagecoach and trudge ankle deep through the mud. The rate possible to travel in stage coaches depended on the elements. In the spring and fall no more than  two miles per hour was all that could be accomplished.

The cost of travelling was three times that of a first class fare charged later on the Grand Trunk Railway. However, stories of great speed on occasions are related to stage coaches depending who it was and how many horses they had. It was customary at one time for the governor of Ontario to proceed up and down the St Lawrence in a large bark canoe rowed by 12 men and followed by another boat in which tents and provisions were carried.

The WATT family ran a line from their store to Bytown (see below by Taylor Kennedy).
Other early (1830’s) stage coach lines went from Bytown to Aylmer, Quebec to take people
to the steamboat docks for travel westward up the Ottawa River

Read More on: Bytown or Bust

Years ago I lost my last German Shepherd, Snoopy, to a speeding driver on Lake Ave East in Carleton Place. I placed an Obituary in the Carleton Place Canadian because I wanted the person who hit him to understand what my family was going through. Of course Snoopy should not have been roaming the streets, but he escaped through a hole in the fence in the backyard, and sadly met his maker.

My late sister was hit in Sherbrooke, Quebec years ago trying to cross the street, and even I was hit by a speeding driver at age 6 on Albert Street in Cowansville, Quebec. One might say I have a strong personal interest in this. Last night I posted an article with suggestions we as residents might consider. Instead of complaining about it, I suggest we channel that energy into creating public awareness about the issue. If you don’t think working as a community works– remember that neighbourhood organizing has a history as old as the neighbourhood concept itself.

Today Lynne Johnson told me she was putting up a sign saying, “This is Our Town–Slow Down! I thought it was quite brilliant so I got one made too. Slow Down Signs are great tools to remind drivers to control their impulse to speed. Sometimes people need a friendly reminder that pedestrians are walking or bicycling in the area. Help make your Carleton Place streets safer by taking up the sign challenge. Have your kids make a sign so they will understand the importance of what we are trying to convey and spread the word at school.

Public awareness works. Imagine drivers being flooded with the image of Slow Down signs. Maybe they would think for a second. It’s a start.

If you make a sign email me or PM me and I will come and take a picture. Let’s get crackin’ as they say!

In the 60s the newspapers were full of articles related to Carleton Place’s “Killer Junction”. “Killer Junction” was located at the intersection of Highway 7 and 29. In the 60s a decision was finally made to install red and green traffic lights which would control the traffic coming from all directions.

Highway 7 had always been the nemesis for scores of people involved in traffic fatalities and injuries. One of the biggest weaknesses was the overpass above the CPR line on the west side. Motorists proceeding east, although warned by traffic signs at one point, had no idea of the danger lying ahead– even after they topped the overpass rise. The problem was that too many motorists did not observe the warnings placed on all four sides to slow down because of the intersection ahead.

Before the traffic lights were installed, the motorists only had flashing lights posted for several hundred yards in all directions. There was also a red lighted STOP sign indicating to motorists that they should come to a full stop. Over the years many changes had been implemented, but nevertheless the extreme dangers still existed as attested to the fatalities cause by those that did not observe the rules.

Most of the fatalities occurred during the fall month as the setting sun from the west completely obliterated vision for drivers proceeding north or south on Highway 29. The proposed green and red lights were to be given a fair trial to ascertain if this was to be adequate. The only other solution would to build a cloverleaf but that would entail great acquisitions of land.

This is the “Toll Gate House” located just south of the Village of Lanark on Hwy # 511.

Every thirty miles, years ago, tolls were situated along on the Eastern Townships Autoroute in Quebec, and people complained about having to pay for the maintenance of the roads. Imagine if they had to endure the roads in the 1800’s. If you used a road, you had to stop and pay a toll, and this money was used to maintain them. There were many Toll Gates in Eastern Ontario.  Farmers used to have to maintain the roads that were adjacent to their property, by crushing stones and grading the roadway.  If you didn’t do this, there could be fines imposed.

Roads, for longer than people could remember, were nothing more than dirt tracks that turned to mud in the winter and baked rock hard in the summer. Either way, movement along these ‘roads’ was difficult and at certain times of the year, practically impossible especially in Montague Township where farmers suffered due to bad road conditions. So the toll was a way to supposedly get better roads.

The public was given the opportunity to invest in these road companies. The money raised by charging people to use the roads was split between profits for the share holders and the cost of maintaining the roads in the control of the trust.Toll gates were established through which people and carriages had to pass before continuing with their journey.  People began to object paying a toll. Some would even jump over the toll gate to avoid paying. To decrease the chance of this happening, spikes (or pikes) were put at the top of the gates – hence the title turnpike trusts. In some parts of the country, the toll gates were so unpopular, that they were destroyed

The 1855 Municipal Manual for Upper Canada granted private road companies the right to collect tolls in consideration of planking, graveling, or making a bridge. The public was given the opportunity to invest in these companies. Any group of men with a minimum of 5 people could form a joint stock company as long as they built a minimum of two miles of road. There could be a toll gate every five miles, and the charge was a penny per mile with a half penny extra for animals. Most of the roads were laid with pine blanks most of it from the John Gillies sawmill.

Even the Lanark Era newspaper got into the fray, and advertised where the secret non paying roads were- which didn’t make sense. But if you went to church, or were a man of uniform, you could forgo all means of payment . By 1856 people had enough and refused to pay because the planks were rotting away. Word up and down the Lanark line was that the roads were so bad even the transportation of corpses couldn’t make it to their destinations. In1904 tolls ceased to exist as the maintenance of the road was taken over by the county.

Photo of Lanark County Road Crew from Bytown or Bust

The Beatles never came to Carleton Place, nor do we have an Abbey Road. But, we have two small crosswalks on Bridge Street, that each time I look at them I think of Abbey Road. But that is just me!

The other day I watched an elderly woman attempt to cross the one almost adjacent to the pet store. I counted 9 cars that went by her and no one stopped. Today I tried to cross, and 7 cars went by before I was able to cross.

There is also a similar issue to the crosswalk by The Blossom Shop. Signs are very clearly marked “Caution Cars are Not Legally Required to Stop”. So, because they are not required to stop, a lot of them don’t. Please courteously stop for people!

Please be aware of those stop signs at Albert and Beckwith, as there is some sloppy driving going on, and accidents are happening. Just food for thought folks!