Eliminating waste — Depending on where one lived and his or her station in life, this necessary function was either a nasty problem to solve or a veritable goldmine.

Urine has long been used as a tanning agent for leather, and in the production of saltpeter, a component of gunpowder. People had businesses, going about collecting from wherever animals and man relieved themselves, storing it and selling it. It could be quite lucrative, although never very socially acceptable. There was good reason leather tanners were usually banished to the outskirts of town.

Night soil, however, did not have very much resale value. Meat eaters like humans don’t produce good fertilizer. So from the very beginning of civilization, there have always been those whose job it was to collect and cart waste somewhere else.

Most medieval castles or wealthier homes had garderobes; privy rooms in closets, where waste materials fell into a pit or midden, or worse, into a body of water. People who didn’t have these rooms often dumped their waste from the chamber pot into the streets.

It’s a wonder they didn’t all die of plague, and but for the night-soil men, they might have. These individuals cleaned both animal and human waste from the streets, alleys, middens, sewers and trenches, and carted it out of town. Far out of town. Outside of London, one pile o’ poo was seven and a half acres wide, and was called “Mount Pleasant.” 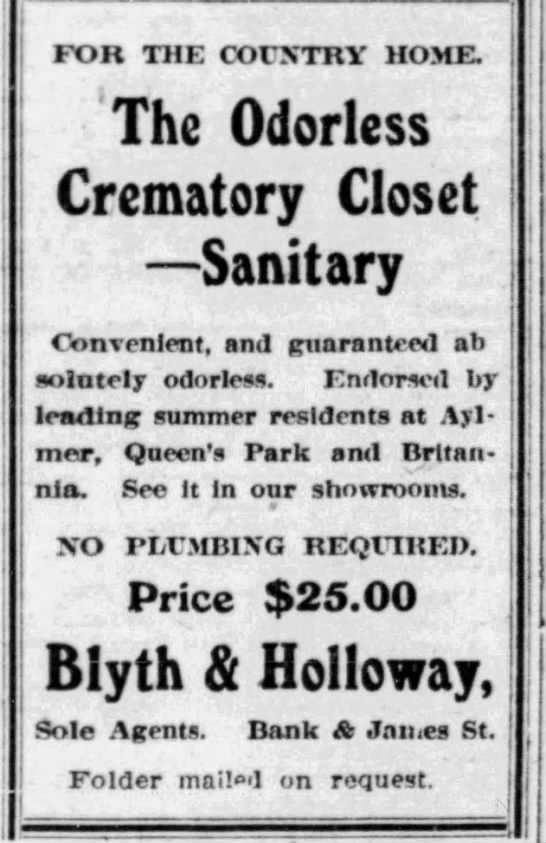 The homes of this time had privies in the back yard. By the beginning of the 19th century, when homes were being built in Brooklyn Heights, Greenwich Village, and the other early settlements of New York City, there were no bathrooms in these houses.

There was the tub stored in the pantry, and a chamber pot under every bed, and the privy out back. This would not change until the dawn of the miracle of indoor plumbing, in the 1850s.

By this time, another slang word for the toilet had been coined: the water closet, so called because early indoor privies, really fine furniture pieces made of wood, were often put under the stairs, in a closet.

Finally, someone figured out how to deliver pressurized water that had sufficient power to flush wastes into a system of pipes that lead outside of the house, to the sewer. Englishman Thomas Crapper usually gets the credit for this, but he did not invent the modern toilet.

Thomas Twyford actually holds that honor. In 1885 he invented a valveless toilet made out of vitreous china. Previous models had been made of wood and metal. Thomas Crapper owned a plumbing supply company, and he bought a patent for a “Silent Valveless Water Waste Preventer,” and began making toilets. The rest is history. As we know, the slang phrase “in the crapper” comes from his name.

It was brought to the United States by American soldiers after World War I, after seeing Crapper’s name all over toilets in the U.K. If Thomas Twyford had stamped his name all over every other toilet in England, we might be saying “in the twyford.” Doesn’t have the same ring.

Some day take a walk somewhere behind the old Carambeck School/Community Centre in Carleton Place there lies what appears to be rows of earth that maybe once was created by agriculture. In fact if you look around closely on the outskirts of any village, town or city you might come across the very same thing.

What Was a Honey Wagon?- The Job of a Night Soil Scavenger

Carleton Place and Beckwith Heritage Museum– Photo-Founded on a rock this town. Think back to no indoor plumbing. Outhouses needed to be emptied. Where did all the poo go? Behold the Honey Wagon dumping ground! #poop

Somewhere behind the old Carambeck School/Community Centre in Carleton Place there lies what appears to be rows of earth that maybe once was created by agriculture. In fact if you look around closely on the outskirts of any village, town or city you might come across the very same thing.

“You smell that Jimmy?”
“Hey I know that smell from somewhere! “
“That’s right Jimmy that smell is from the local honey wagon!”

A honey wagon was a large sacred vehicle which carried a tank filled with human feces, which was found inside of the “honey holes”, and was transported to a secluded location where sometimes it was dried and then scraped up to be disposed of elsewhere. Sometimes it was just left there to ferment.

In the good old days there was no such thing as proper sewer drains. Most town and city streets had open sewers running down them in to which all kinds of waste was thrown. There was in theory at least a system of refuge collection to clean up the streets that were littered with rotting food, dung, animal corpses, human feces and other waste products. But the cleaning up system was sporadic and not carried out effectively enough. In fact I have read local town  newspaper notices advising people that Spring was just around the corner and to stop throwing their garbage out the windows to the streets below. Yes, that would be you Carleton Place!

In addition people had to make do with burying much of their waste material in a cesspit either in their cellar or in the garden. Technically these were supposed to be emptied regularly, but many were not. The stench was overwhelming not only in summer but in winter as well.

The Honey Wagon From the Lethbridge Historical Society

When you ask about the worst, most dirty/horrible jobs many people immediately respond with coal mining.

In 1907 the Lethbridge City Council decided that a scavenger should be hired. The duties of the scavenger would be to clean the privies (outhouses) and pick up garbage but also to remove the dead animals from the coulees. The winter of 1906-07 was a legendary one for the cold and snow. Come spring there was said to be 40 head of cattle found dead around the coulees and community of Lethbridge (many, many more out across the country). It was the scavenger’s responsibility to collect and remove the dead animals. They then had to be buried or burned. The said would dispose of the hides of the animals.

Eventually the job of dead animal scavenger would be separated from the job of “Night Soil Scavenger”. This rather intriguing job title belonged to the person who cleaned the outhouses around town. In September 1909 E.P. Mee was contracted at $25/week. The city would supply the lime. Then, of course, all of those lucky people who had to clean out the bed pans and other indoor toilets. Lucky, lucky people.– Lethbridge Historical Society

Penny Trafford– All along the houses on McArthur and Napoleon to Lake Avenue there is an 8 foot allowance that separates properties owned by the town which was the Honey Wagon lane.

Outhouses Need to Be Cleaned– Conditions of Our Rural School– 1897

Cisterns I Have Known

Hats Off Carleton Place! — A Hard Wood Makeover-Before and After

The Outhouse is Trending Again!