The Grand Hotel has opened in Carleton Place, and today I found out we once had a Grand Hotel here in the late 1800s. It was actually called The Grand Central Hotel and it was first owned by David Dowlin. When he headed west to Minnesota he leased the hotel to his nephew Thomas Doyle from Drummond.

After doing research for a few hours I failed to come up with the location so I called Jennifer Fenwick Irwin at the Carleton Place and Beckwith Heritage Museum to see if she knew. She had never heard of it either, but we both assumed it had to be near the train station as it kind of went with the Grand Trunk Railroad that went through town– and maybe it wasn’t.

Ray Paquette
This house always fascinated me. When I was a lad the former Snedden Hotel was owned by a Mr. Feltham (sic) who ran a rag business out of a former hotel on the west side of Moore Street in the area beside Interval house that was torn down in the 1950’s and replaced with a Cities Service gas station.

Thanks to Jaan Kolk–Hey Linda, the 1888-9 Ontario Gazetteer you referenced actually has an ad for the Grand Central Hotel on the page following the listing (p.225) with a drawing – and it gives the location as directly opposite CPR station

In 1905 Thomas went to visit his uncle David Dowlan and was injured in a Great Northern train wreck. I don’t think the Carleton Place hotel lasted too long as Thomas Doyle went to Ottawa and opened the Strathcona Hotel on York Street. I can’t seem to find anything on that hotel either, but it is nice to see that the New Grand Hotel name in Carleton Place has a wee bit of reference to days gone by.

Perth Courier, April 12, 1895–Mr. Thomas Doyle of Drummond has gone to Carleton Place to take charge of the Grand Central Hotel there having leased it from his uncle D. Dowlin.

The Carleton Place Herald of Jan. 14 says:  “Last Tuesday morning William Earle of Carson and Earle of this town and Annie Doyle of Drummond were united in marriage.  The ceremony was performed in St. John’s Church, Perth, by Rev. Father Duffus after which the party drove out to the residence of the bride’s parents where the marriage festivities were observed.  Miss Hattie Doyle, cousin of the bride, was maid of honor and Thomas Doyle, proprietor of the Grand Central Hotel was best man.  The guests were many and a pleasant evening was spent. The presents were numerous and handsome and useful.” 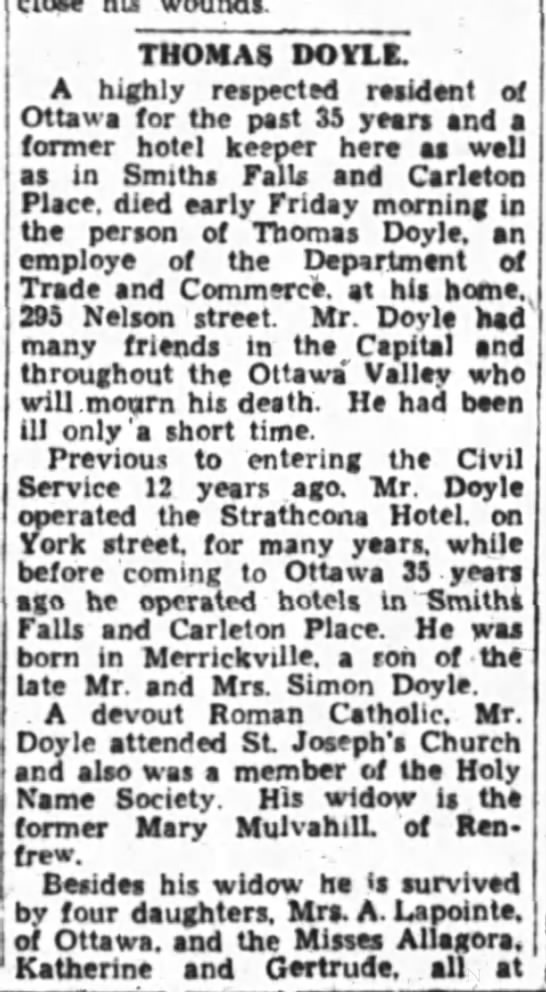 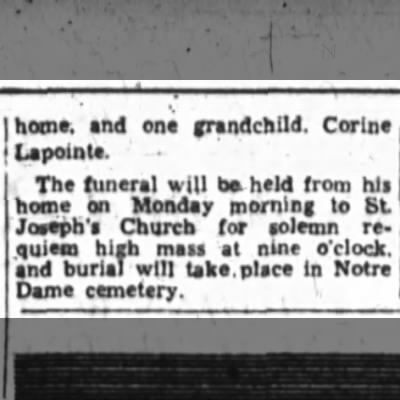 Jaan Kolk–I had trouble finding anything on the the Strathcona Hotel, York St. too, until I found this June 13, 1903 Ottawa Journal obituary for Thomas M. Doyle, which gave me the address 32 York St., and a year. The 1901 Might directory lists the Strathcona Hotel, 32 York St., Thomas Doyle prop. The 1890-91 Woddburn directory lists it as the Lynott House (Wm. & David Lynott) and the year before it was the Davidson House. The Strathcona was short-lived – by 1906 or earlier it was the Farmers’ Hotel, H.R Boyd prop.

Jaan Kolk–And here is a June 6, 1906 Journal notice of transfer of tavern license for 32 York St., already the Farmers’ Hotel from the Strathcona in Ottawa. I had trouble finding anything on the the Strathcona Hotel, York St. too, until I found this June 13, 1903 Ottawa Journal obituary for Thomas M. Doyle, which gave me the address 32 York St., and a year.
The 1901 Might directory lists the Strathcona Hotel, 32 York St., Thomas Doyle prop. The 1890-91 Woddburn directory lists it as the Lynott House (Wm. & David Lynott) and the year before it was the Davidson House. The Strathcona was short-lived – by 1906 or earlier it was the Farmers’ Hotel, H.R Boyd prop.

The Leland and Rathwell Hotels on Bridge Street

The Rules of the Queen’s Hotel in Carleton Place

So Who Painted Those Wall Murals at our Carleton Place Hotels?