Edward Welsh, who operated a shingle mill at Playfairville about thirty years ago was one of the early immigrants to the Canadian west in the ‘80’s.  He was a well known resident of Playfair district who to distinguish him from others of the same name was called “little” John Playfair.  Mr. and Mrs. Welsh are both living yet which their many friends in the old place and elsewhere will be glad to learn.

Lately they had their Golden Wedding which is thus described in the Baldur, Manitoba Gazette:  “Mr. and Mrs. Edward Welsh, old residents of this town and district, were the central figures in a very interesting event when on the afternoon and evening of Thursday, May 21, surrounded by six children and grandchildren to the fourth generation, brothers and sisters, nephews and nieces, grand-nephews and nieces, friends and neighbors, they celebrated their Golden Wedding and despite the years, the toil of the journey and the battles, by the way the faces of those two shone as radiantly as in youth as they received and entertained the merry crowd of young and old who came to rejoice with them in their attainment to a half century of happy wedded life.  Three stalwart sons, William of Baldur; George of Plunkett, Sask., and Fred of Baldur, were present to rejoice with their parents on this happy occasion.  The only real cloud on their sky was the absence in the far west of their only daughter Mrs. Smith.  Many little gifts accompanied by good wishes marked this day, one of the features of which was the presentation of a purse of gold to the bride and groom of fifty years ago, as a token of the kindly feelings of those about them and reminder of the wealth that belongs to the man and his mate who have been spared to each other for five decades.”

The 1880-81 Bathurst map of Fallbrook area indicates a William Lee’s sawmill on the Fall River, at the exit from Bennett lake, and his sawmill, grist Lees sawmill, 1916 mill and woolen Mill, beside Fallbrook. He is also listed as (Book: ‘The Blacksmith of Fallbrook’) owning a mill at Playfairville, then and again in 1882. The carding mill, and two other sawmills, are on Bolton Creek, north and north-west respectively of the hamlet, one of which shows on the property of J. Chester (Lot 20 Con 11), presumably, the mill owner. For more information on the Fallbrook mills–The Mills of the Tay Watershed and Area
in Eastern Ontario 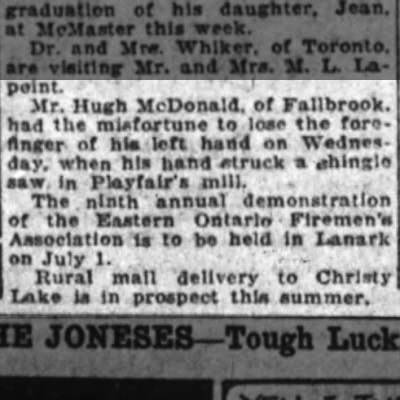