Lorrie McCann and Dawn Jones were discussing the Tatlock Quarry on the  Lanark County Genealogical Society Facebook page in 2016. I will tell you I searched and searched for hours and could not find much. All I know is that work has carried on in the Tatlock Mines since 1900. Dawn mentioned Archie Guthrie– and so sad to say all I found is his obituary.

Update October 18, 2018- Found the notes in one of the school books that belonged to Doris Blackburn/ Karen Blackburn Chenier

First mine mentioned was Clyde Forks Mine

Dawn Jones —A very interesting read. The cheese factory mentioned at the bottom of the article was known as Barr’s Corner, or Factory Corner or 5 corners. Closest intersection would be Tatlock Road and Darling Road, and Warks Road today.

Is there Still Gold on Wellesley Island ?

Did Anyone Find the Lost Barrel of Silver Coins That Lies at the Bottom of the Rideau Canal?

What Happened to the Gold on the Ramsay 7th line?

So What Happened to the Marble at the Tatlock Mine?

My Daddy was a Miner — was Yours?

They said that in the 60s there was millions of dollars in marble inside the Tatlock Mine. For more than a 100 years people have known that but for years they said that the only blue marble that was supposed in the world was right there in that very mine which was 26 miles from Perth. There are mines in Europe that are supposed to have blue marble but nothing to rival the colour of the blue sky that the Tatlock mine had. 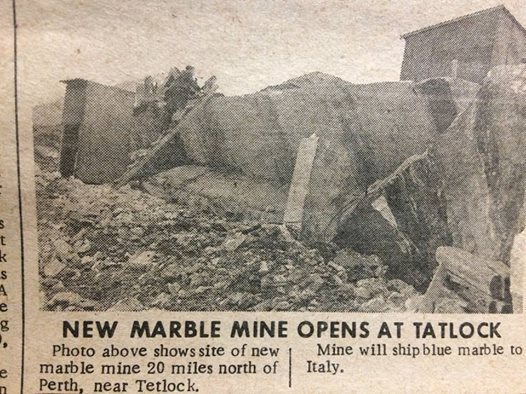 In the 60s development was going on and they were hiring local labour. It was anticipated that the Tatlock Quarry Marble would soon be used in projects in the United States and Canada.

The marble was being taken out at that date in blocks weighing 90 to 300 tons which was the size of a small home. The huge blocks were of 12-15 tons and then trucked  to the company in Scarborough where they were then sawn into blocks by a diamond drag and polished into either pink blue or white. Sounded like a very promising business– so what happened. Now th rock formation is gleaming hill of white crumbly rock that OMYA is gradually stripping away for use as filler in things like paint, plastics, and toothpaste. The quarry is spectacular. What a pity to use such beautiful rock in such mundane ways. What happened to the dreams from the 60s?

Isabel Fox–There are two mines – a white marble and a light blue marble mine. I believe they are presently owned by a Swiss company. My Guthrie ancestors landed on the blue marble quarry when they came to Canada. The late Lloyd Francis MP said it was the best blue marble in the world. I had a marble table made from the blue marble and the marble was shipped to Toronto for cutting and then returned to me – a treasure.

They were all taken at the Tatlock Quarry. I found them in my parents collection of pictures. I’m assuming here that my mom took these pictures. My parents were Donnie and Audrey MacDonald and my dad worked for Archie Guthrie at the time.