LindaThese photos are a scan of a picture I recently received from my sister Eleanore Eliopoulis. I put as many names to the individuals as I can remember but they are not all accurate due to the more than 60 years that have passed since that time. Some names that I think should be there are missing because I am not sure.. Faye Robertson, Beverly Emerson etc. I, of course, am not in the photo as  (for whatever reason) I always managed to avoid these photo sessions. I don’t see John Clifford, Sam Saunders, Wayne Ormrod-

BUT there must be some of us left from that era that would be able to add some names. I will eventually get the photo to Jennifer-if she is interested, and perhaps it can be restored somewhat. From time to time I will go back to the photo as some name or other pops up for no reason, ie. I struggled over “Pauline Burns”, whom I recognized but for the longest time, her name escaped me but when I opened the photo this morning-there it was. I hope I am right. There are many others that I knew but still struggling with the names.

Like us all Larry and thank you and Eleanore!

Because of the technology available at the time, the picture was taken twice: the left hand side and then the right. This provided an opportunity for the late Bill Hendry to appear in his assigned position on the left then to quickly speed to the right side and reappear standing and smiling impishly, appearing in the photo twice!!!

Get me to the My Future Wife On Time — Larry Clark

I Was Axed — Memories of Larry Clark — Bell Street

Cruisin Through the Dance Halls- From Carleton Place and Beyond!! Larry Clark

Memories of a Photo — The Forgotten Canadian Forestry Corps, Booze and a Mud Quagmire

Old Notebooks Larry Clark and I Once Had a Math Teacher like This! 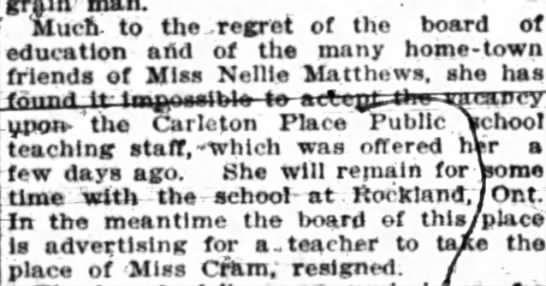