Among other less typical and therefore newsworthy incidents of the liquor trade, a classic barroom news item is one recorded in the July 12th Carleton Place Herald of the summer of 1860, reported from the village of Clayton:

“An accident happened at Clayton on Monday last by which a young man named Andrew Waugh came near losing his life, and may serve as a caution against similar occurrences.  Accident happened at the Hotel of Mrs. Sutherland in the village of Clayton.  A newly emptied high-wines barrel was turned out in the morning and stood on end outside the barroom door.

In the afternoon the young man, who is the bar-keeper in the hotel was sitting on it and took out a match to light a pipe for another individual.  The fire ignited with the gas or steam of the alcohol escaping out of the tap-hole of the barrel and caused it to explode with a terrible cannon-like report, pitching the young man and the barrel a considerable distance out on the street and severely burning one of his hands.  Had not the lower end of the barrel burst out the consequences might have been serious.”

So why did the name Andrew Waugh seem so familiar when I found the above story? Because, we were looking for more information on him in 2016. This is what Darlene Page had sent me then.

The photo above was done in metal–there were a lot of photos done in metal around 1870 until the late 1880’s when a carnival use to come to the local towns in the fall.

It is actually called a tintype and it was patented in 1856. Tintypes were seen as an improvement upon unstable, paper daguerreotypes and fragile, glass ambrotypes. In contrast, tintype photographs were exposed on a sheet of thin iron coated with collodion, which required less time to expose than albumen, but was still inconvenient inasmuch as the photograph had to be taken with the wet material on the plate.

Darlene had the Carleton Place Library help her out with dating the photo a few years ago and they are 99% sure that this man is Andrew Waugh, father of Samuel Waugh.

Darlene also thought also there was an article in one of the past Carleton Place Herald newspapers about “an Andrew Waugh” working in a local pub and a barrel getting blown up. He either lost his hand, or it was burned badly. The Waugh’s were living out near Innisville  she thinks  at the time before they moved to Carleton Place with his parents Alexander and Jane Waugh. She also thinks there may have been a family farm out in Drummond. but  she hasn’t a clue where to find that info—if she could find that out—a lot of questions would be answered! So we found the story and hope to find more. You just never know until you are looking for something else I tell you and boom! it appears..

So who was Mrs. Sutherland?? Thanks to Rose Mary Sarsfield

Hi Linda:Mrs. John Sutherland was born Catherine Coulter in 1832. She was the daughter of James Coulter and Elizabeth Waugh. She married John Sutherland in 1854. He was the tanner in Clayton. I expect that they lived in the house beside the tannery. They had one daughter, Elizabeth. John Sutherland died in 1858. When he died he left all his worldly belongings to his daughter. Her affairs were to be managed by Timothy Blair, Thomas Coulter, (Catherine’s brother,) and Catherine. He appointed James Coulter her grandfather as her guardian and he was directed to rent out the property and the money collected was to be used to support his daughter until she came of age.

I expect the “hotel” mentioned would be the family home where it is known that she took in boarders. Then a single man, Ozias Banning arrived in the village in 1858. He bought the small store that was beside the present store and set up a business. In 1861 he married Catherine Coulter Sutherland. In 1864 they purchased the store across the river (later Halpenny’s) and spent the rest of their lives there. In 1866 James Coulter sold the tannery property to George McNeil and his son Charles. Catherine and Ozias Banning had four other children besides Elizabeth. Elizabeth grew up and married Abraham Code and they went to North Dakota. Rose Mary–author–Photo from Whispers from the Past by Rose Mary Sarsfield- available at the Clayton General Store, Mill Street Books in Almonte or email rose@sarsfield.ca

Story of a Locket- Waugh Family 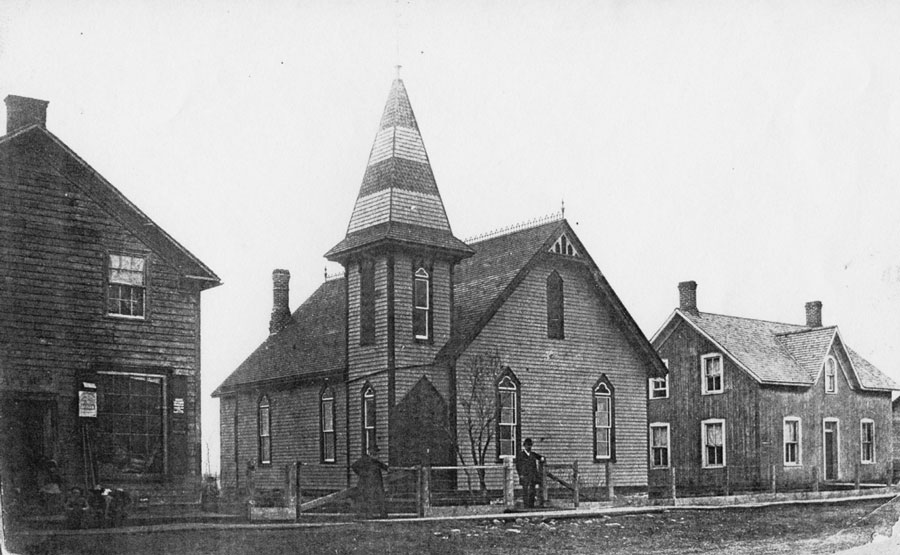 The Middleville Chair that Ended up Rocking John F. Kennedy President of the United States

Have You Ever Paid Tribute to our Pioneers? Middleville Pioneer Cemetery 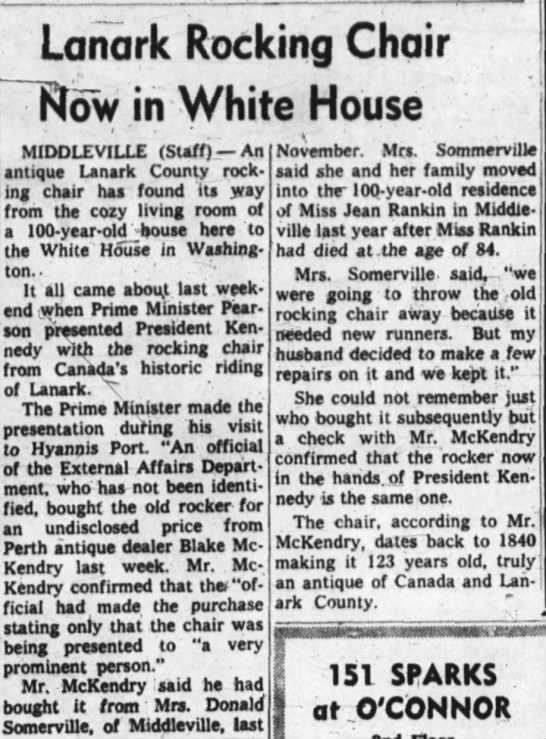 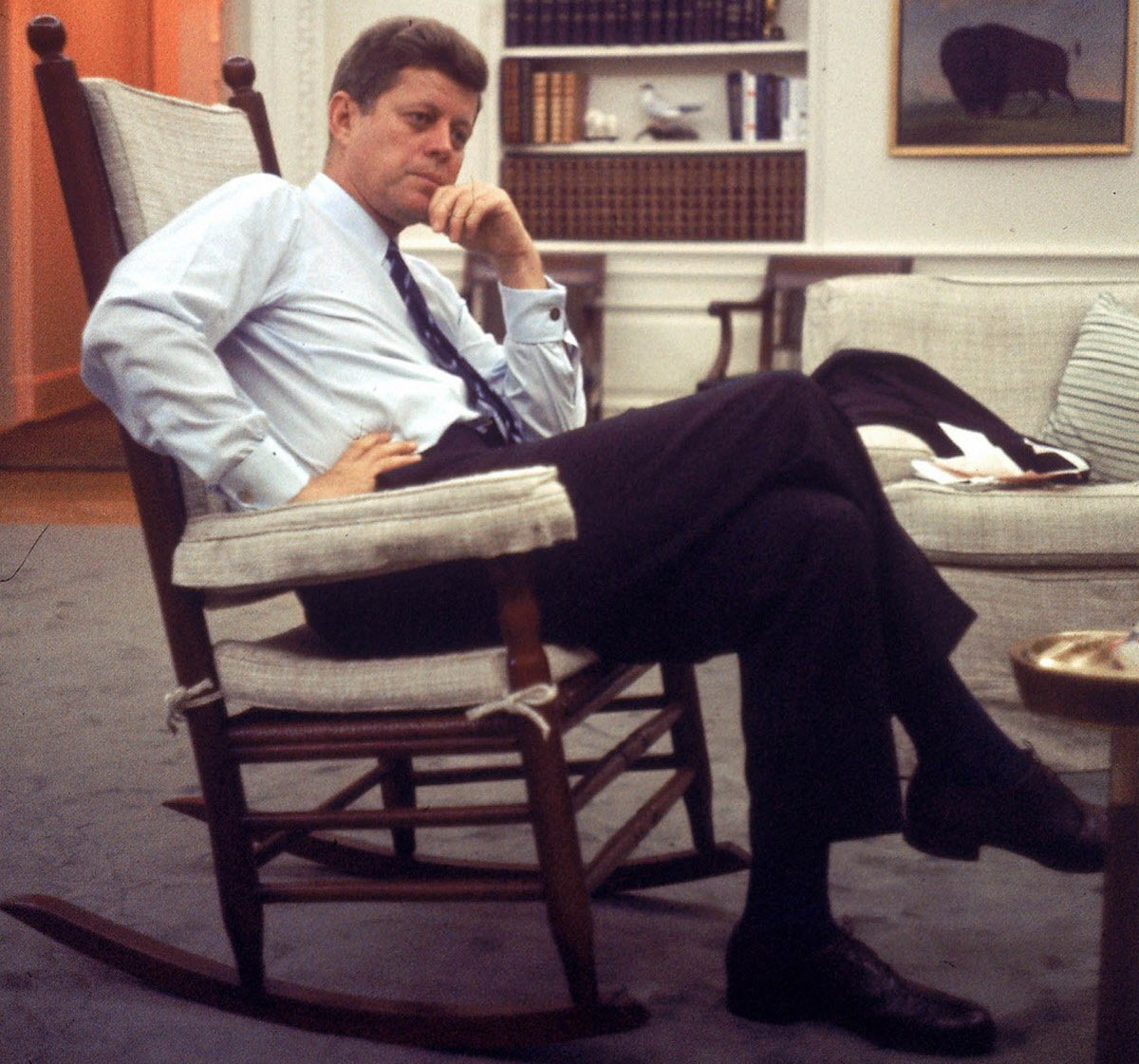 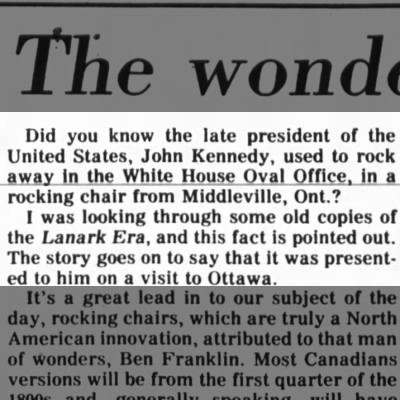