I have encountered my fair share of skunks growing up as a child in the Quebec townships. But, last week my husband Steve got sprayed by a skunk in the yard while the sun was coming up. It seems everyone has come to me throughout the years to remedy an immediate crisis.

Like my sons when they were young, my husband came into the bedroom and almost killed me with the stench. I pretended to still be asleep, but believe you me I knew what was cooking in the bedroom, and it wasn’t love. No matter how many Pepe le Pew jokes you make I wondered if I should wash him in tomatoe juice and baking soda as soon as possible.

Instantly I sat up and asked a very stupid question.

“Did you REALLY get sprayed by a skunk?”

Steve replied with a sad tale about the wee critter lifting his little bottom up in front of him. Now my husband is an American from Berkeley, California and one would think the message about skunks had gotten that far west by now.

It’s not like I can tie him up outside for the day, or get the garden hose out and hose him down.

It reminded me of the year 2006 when a small flea had been found by my son, and he had told everyone it had not been found on the dog– that they were somewhere in the house. After assuming the necessary precautions, nothing else was found. All of us, with the exception of my oldest son, had green lighted everything. The crisis was over as far as we were concerned. At approximately 2:30 am that night a large flashlight was pointed in my face while I was fast asleep. It was flea fighter son number 1 with a look of terror on his face.

“Mom, I have been in here for 10 minutes shining this flashlight on my white socks and I have found two fleas”.

Apparently the white socks were used as bait and displayed whatever he thought was a flea in fine form on the white colour.

“I can’t sleep upstairs,there are fleas everywhere,” he said.

I strongly and silently disagreed with this as we have gone through this many times with other creatures and insects such as bats and spiders. It never fails that when the oldest is not Kosher with something he comes downstairs to his old room where I sleep so he can sleep in his old bed.

His former room still holds his childhood Bobbleheads, Beanie Babies, hockey posters, and two small pocket mirrors taped to one of his shelves across from his bed. He constructed those mirrors at age 9 as a plan to see if the boogeyman was coming into his room.

“Mom I don’t think anyone realizes how serious this is as no one will own up to the grave problem we have here,” he continued.

I shot him a look that said everything. How could I take anyone seriously that was going to walk around all day in the summer heat in long jogging pants with white socks pulled up almost to the knees and white shoes. Mind you the white shoes were very soft leather fashionable ones from Aldo. But still–no dice kid!

In the morning he cleaned his room for the upteenth time in 24 hours. He vacuumed, he sprayed, he vacuumed again, and then more spray. To appease my child I vacuumed everywhere also and he followed me and sprayed again. In this house that’s a big job and I was sweating like a dog– the same dog who caused this issue who was now relaxing outside on the veranda not worrying about fleas.

After lunch son number 1 yelled information down the stairs each time he thought he had found new alerts about fleas on the internet. Anyone who has been sick and looked up things on the web knows for a fact that you can scare yourself for life with some of those articles. So far, not one flea had been found, but I began to Google “Symptoms of Toxic Brain Freeze from Aerosols” on the internet.

That night Sky came down the stairs dressed in the same outfit as the night before. White shirt tucked into white printed PJ pants, and white socks pulled up to his ankles. I was exhausted from his shenanigans, and so was the dog who was still crashed out on the veranda. With that he wrapped himself up in two sheets much like a mummy with a giant flashlight in one hand and a cell phone in the other. I shook my head and realized that thoughts like fleas jump from man to man– but they really don’t bite everyone. The dog looked at me and nodded his head in agreement.

Epilogue- 18 years later come Spring, when the spiders begin to venture out I get the occasional text photo from my son about the spiders in his basement– and asking if he should sell his home.

As for Steve I just called him at work this morning and told him his Warrior’s Tshirt didn’t make it no matter how many times we washed it –but he will be allowed to stay as he has now passed the smell test.

Livery rigs were at a premium in town on Monday night owing to the number of Almonters who drove up to attend the Carleton Place concert. Three of our young townsmen, probably unable to secure another vehicle, had a lively ride to and from the junction town that evening by means of a railway tricycle they were fortunate enough to secure.

They did the distance to C. P. in twenty minutes, we understand, and on the return trip were spurting to lower the record, when, opposite Mr. Wylie’s factory on the outskirts of the town, there was a collision with one of those pretty little stripe-backed animals known technically as the **Mephitis Americana, and the animal shuffled off its coil with more speed than the spurters deemed necessary under the circumstances.

For some time after the unfortunate accident the survivors were threatened with social ostracism by their many friends, but the burial of at least two suits of clothes and persistent and well-directed attempts at fumigation have rendered such a contingency unnecessary. We have not heard in what dialect the owner of the triple wheeler clothed his thoughts when he set out on his next trip, and we are ready to believe that the local C.P. residents are dumb as an oyster over the affair, doubtless owing to the fact that it is against the rules of the company to give every Richard, Tom or Henry particulars as to collisions, washouts or other accidents !

Read more about the October 25th concert here.. What Didn’t You Know? The New Town Hall 1897 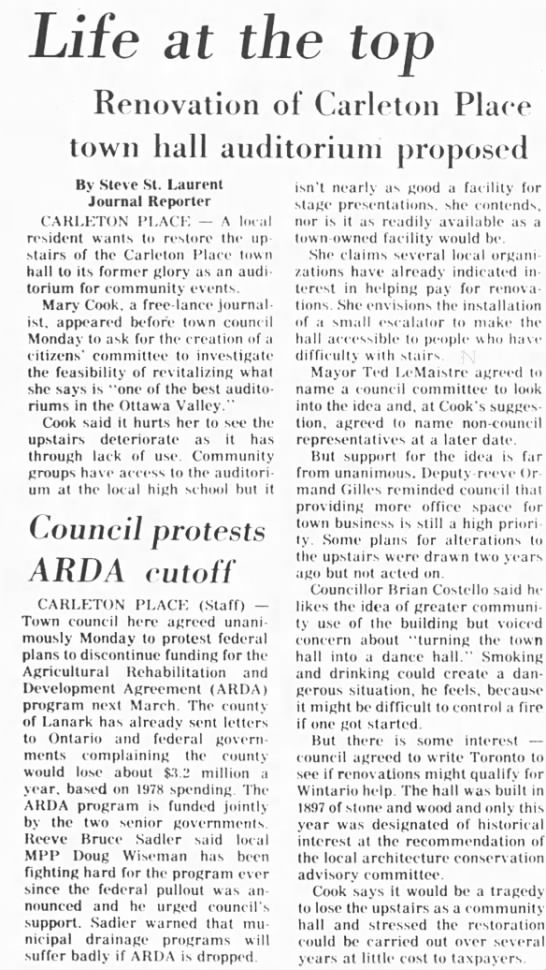 Why is the Town Hall Stage Slanted? Is it Collapsing?

Saved By The Bell in Carleton Place? What Does the Photo Say?

That snowy Wednesday day he was making progress up the line until he came across a skunk in the middle of the road that wasn’t too keen on moving. Well, Mel wasn’t going to move either with his snowplow and wondered why the skunk wasn’t hibernating with the rest of the skunks.

Well, as the standoff continued two young lads Alex Symington and Cecil McIntyre, decided they would do their good deed as it was also Boy Scout Week. They discussed a plan among themselves and then began to pelt the skunk with snowballs. The skunk still didn’t move from either defiance or stupidity. Minutes later with both sides trying to decide what to do, the skunk just decided to move and sit on the side of the road for a spell. I am pleased to also offer the news that Mel Royce finished clearing that road for everyone that lived on the 12th Line of Ramsay.

is this THE Mel Royce or his son?