Santa Claus arrived in Almonte Thursday afternoon, Dec. 23rd, but he came by sleigh and not on the train as expected. It had been advertised that the old boy would be aboard the 3.45 east bound Pembroke local but this train was late owing to a mishap near Pembroke. After Santa waited for quite a while at Blakeney, where he had no doubt been distributing presents, it was decided to bring him into town in a cutter. There was nothing very unusual about this mode of conveyance for Santa Claus except that the vehicle was drawn by a horse instead of the reindeer he uses when on his Arctic travels.

When Santa alighted from the sleigh it was found he had been accompanied from the North Pole by his wife. Some of the youngsters seemed to detect a likeness between Santa and someone they had seen around town before and the same went for Mrs. Santa. But, be that as it may, the two got a great reception in front of the O’Brien from a vast throng of children who had been waiting impatiently for some time for their arrival.

A special welcome was extended to Mr. and Mrs. Santa Claus by Mayor Alex. McDonald and by Mr. Karl Paupst, head of the Lions Club which sponsored the entertainment for the children and the visit of St. Nicholas and his jolly lady. A parade was formed according to schedule and was led by the distinguished visitors in their horse and cutter. It proceeded through the main streets of the town and was made up of floats decorated along Christmas lines; the Citizens’ Band providing music and a group of Mrs. R. G. Kenny’s pupils on a truck singing carols.

On returning to the O’Brien Theatre the young folk crowded in for a free show and generous gifts of candy and oranges. Mr. R. A. Jamieson, K.C., acted as master of ceremonies for the program. Nor were children in the Rosamond Memorial Hospital forgotten. Santa Claus visited them too and presented them with gifts similar to those given out at the theatre.

Dr. J. R. Fraser was chairman of the committee in charge of the Lions Club Christmas party. Assisting him were Messrs. John Lindsay, Jam es Brown, R. A. Jamieson and Nick Carrie. There was a great deal of work entailed in the arrangements not the least of which was the packing of some 650 bags of candy. Special films had been procured for the children’s entertainment which radiated the spirit of Yuletide and Santa Claus, not to mention Mrs. Santa Claus. It is said the latter henpecks poor old Santa to beat the band during their long sojourn in an igloo near the North Pole. In fact this is so much the case that Santa is always glad when Christmas rolls around and he is able to leave her for a few weeks. But this year she was too cute for him and came along to see that he behaved himself, especially with the young ladies of this southern climate because Mrs. Santa is a very jealous gal.

Clippings and History of Mill and Bridge Street Almonte

Seeds of Love–Almonte Cinema – Then and Now

Janice Martin from Wisteria--When I was a girl, growing up in Montreal, Eaton’s had “The Penny Bank Shop” at Christmas time so children could go and shop for their family without them seeing what they bought. It was a small shop within the store just for children. I know it dates me, but I remember it vividly.

Back in the days before shopping malls flooded the land and when the Bay was still Morgan’s, “going to Eaton’s” meant taking a trip to downtown Montreal. Eaton’s was the Blue Cake counter, the Penny Bank shop, and most of all, Eaton’s was Santa.

It may be hard for anyone younger than 35 to understand what it was like when the arrival of the Eaton’s catalogue came to the door. The Christmas Wish Catalogue and the Santa Claus parade signalled the coming of Christmas for all of us. Every child that I knew understood there was only one real Santa – and that man of Christmas was at Eaton’s.

My Mother brought me to the Santa Claus parade a few times, and all I can remember at this very moment was the cold, and then bright lights, and crowds inside Eaton’s as we all pushed our way to go meet Santa. I can still see the frosted over windows as we went up the escalator with my stomach churning from a cold drink that we had at the Honey Dew Restaurant.

I think I remember Santa’s sidekick Punkinhead– but in my mind he was a strange creature. I never remember the Toyville Express train, which wound around the fourth floor as I can still see as clear as day my mother shaking her head when I “lost” the Honey Dew drink. The orange stain on my red velvet dress still rings prominently with me today.

This next Saturday, December 2nd,  Janice Martin will attempt to re-create the same idea at Wisteria. From 10-3, children between the ages of 5 and 12 will be able to purchase presents for their family members for $5 and $10 tax included. Their purchases will be wrapped for them also.

People of Lanark County– Sharon from The Christmas Hut

Thanks to my friend Christine Terepora for sending me this. It’s from Love From The Farm

Santa’s Footprints
What you’ll need
Baking soda (aka bicarb soda)
Pair of boots
Baking tray (larger enough to fit Santa’s boots)
Water squirter
How you do it
Start with your baking soda and a baking tray or similar. There’s no particular ratio. Make sure that the tray is big enough to easily fit at least one boot at a time while your working on the footprints. Spray footprint, then press in the baking soda 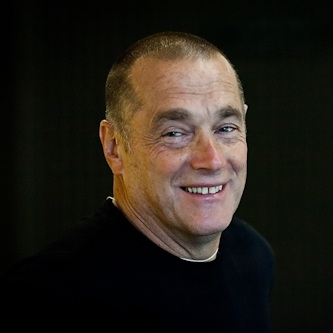 These are from 2010 and 2012.  Michael Gauthier is the owner and principal photographer at Freedom Photography.

Please play while looking at photos 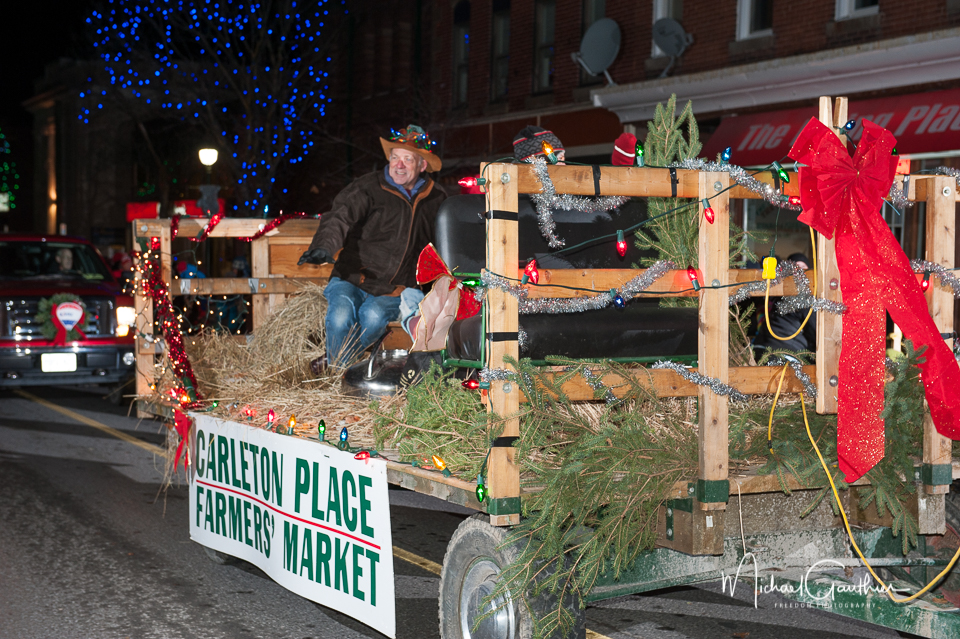 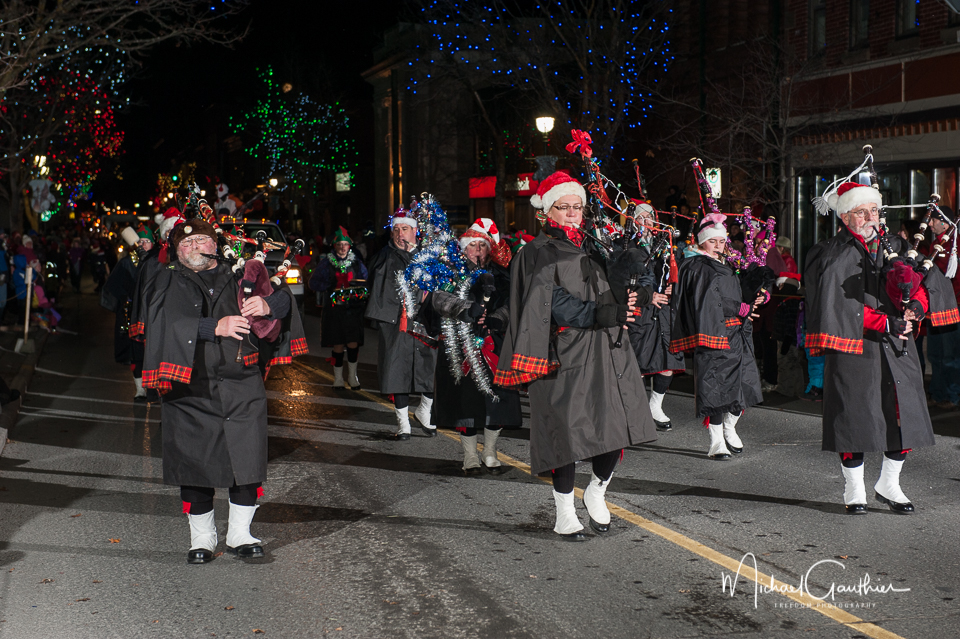 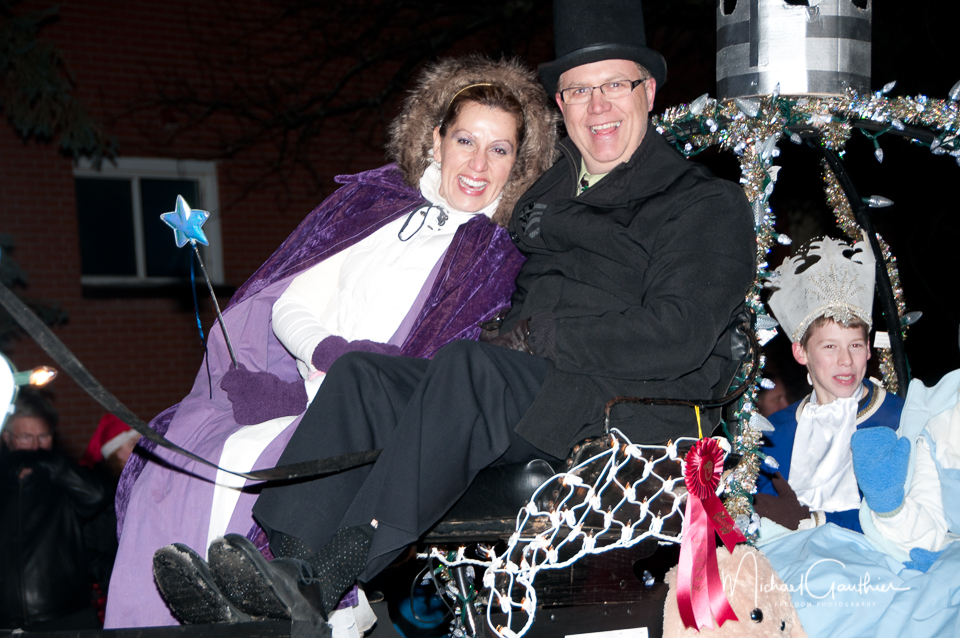 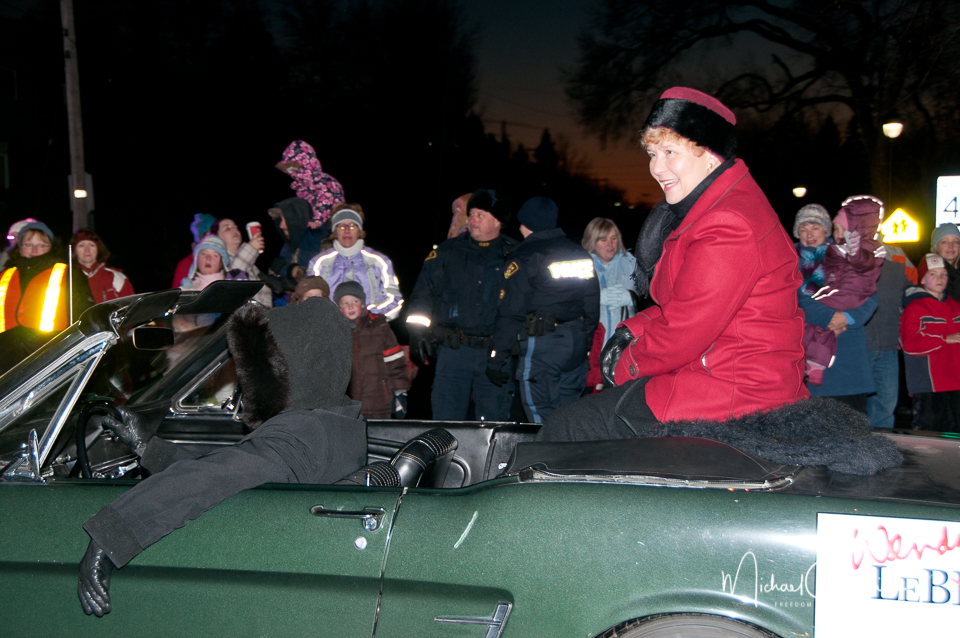 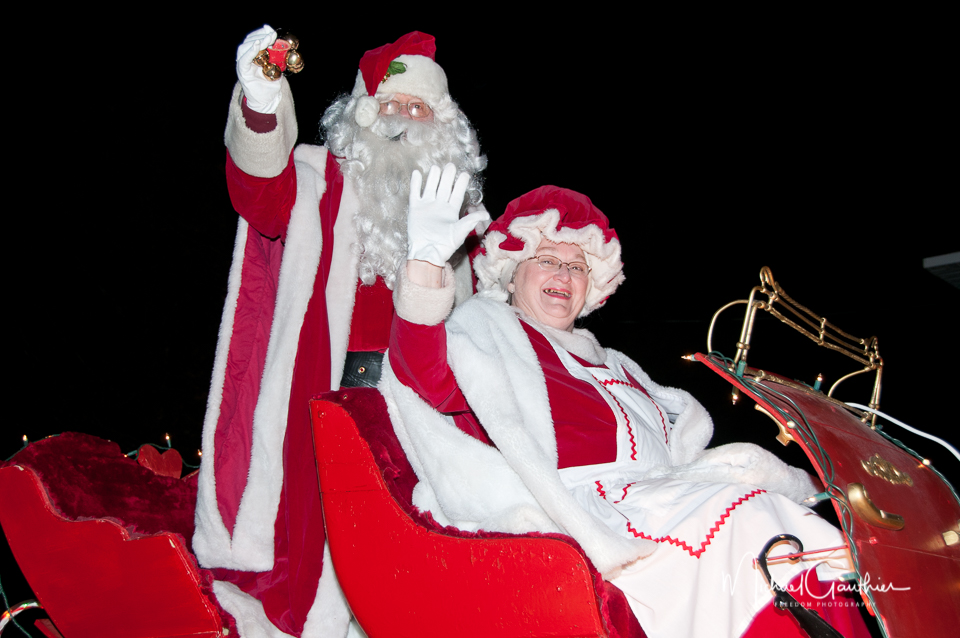 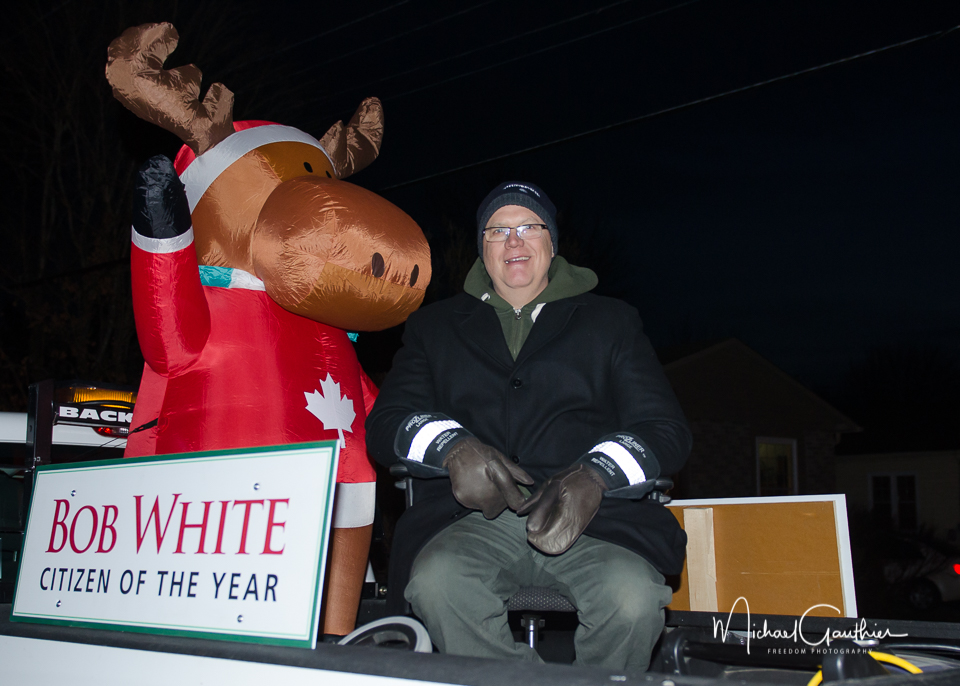 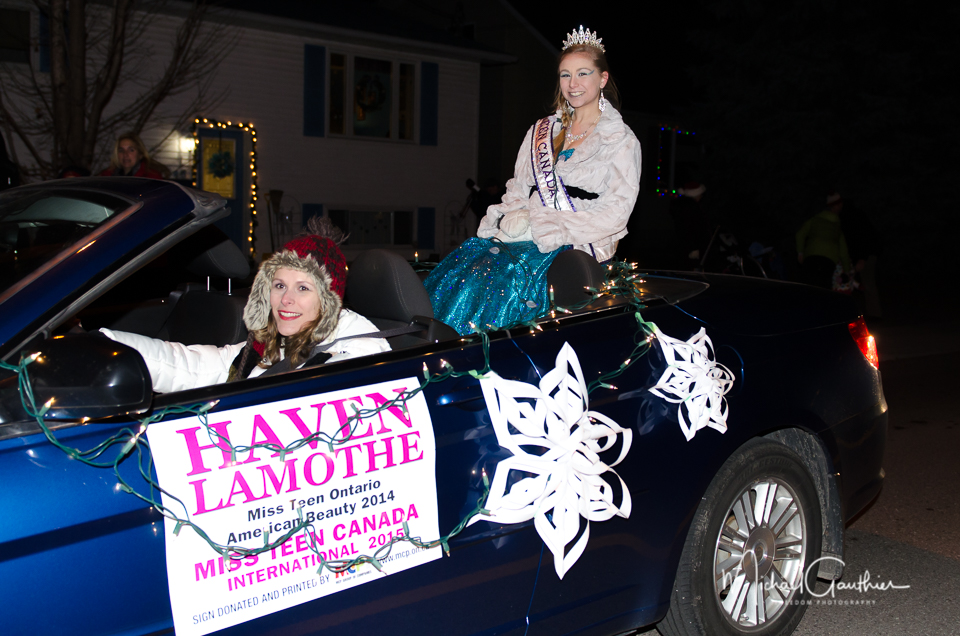 In Carleton Place he loves pancakes–Come see him at the CPHS’s Annual Breakfast with Santa: Sat., Nov 26, 8-11am
Breakfast with Santa will run this Saturday. Live music from the CPHS band, a pancake breakfast, crafts and, of course, Mr and Mrs Claus will be available— $5 for children and $8 for adults. All community members are welcome to join in and get Saturday the day of the Santa Claus parade off to a rocking start!

So what does Santa eat?

In the United States and Canada, Santa is known for his penchant for cookies, so children across the country leave him cookies by the baker’s dozen along with a nice glass of milk to wash it down. This ritual of leaving out cookies and milk for Santa (and sometimes carrots for his reindeer,) has become a tradition in the U.S., but it’s not the standard worldwide. Here’s a guide to Santa’s buffet as he travels across the globe.

Santa starts his Christmas Eve journey with a nice cold beer, courtesy of little kids in Australia. They may also leave some cookies and milk and even a few carrots for the reindeer. But the beer comes first — maybe it’s to keep Santa warm on the long night ahead.

After that beer and his long flight, Santa — or Tomte, a mythological creature from Scandinavian folklore traditionally associated with the winter season — might be feeling a little tired. Fortunately, the good children of Sweden leave out a cup of coffee to keep him awake for the rest of his journey.

The next stop on Santa’s buffet is Denmark, where he can find a bowl of risengrod, or rice pudding, waiting for him on Christmas Eve. According to Denmark lore, the magical elves, Nisser and Tomte, will cause mischief if the bowl of risengrod is missing.

The children in the Netherlands leave gifts for Sinterklaas’ — that’s the horse — instead of the big man himself. Kids leave carrots, hay, and water and in exchange are given marzipan, chocolate coins, hot cocoa and mandarin oranges.

By now, Santa and his steed have had enough to eat and drink, but he does take time to read the personalized letters that children leave out for Christkind, the German’s nickname for him. In the morning, German children wake up to find that their letters are gone and presents have been left in their place.

In France, children leave out carrots for the reindeer and biscuits for Santa or Père Noël as he is known here. Some children leave these treats in their shoes and in the morning the treats are gone and their shoes have been filled with small toys and trinkets.

By the time Santa gets to the U.K., he’s ready for a proper meal. Fortunately, the kids here leave him mince pie — filled with dried fruit or the more ancient tradition of meat pies. The children also leave him a nip of sherry to chill his weary bones.

This might be the stop that Santa Claus looks forward to most of all. In Ireland, the children treat him to a pint of Guinness and maybe another mince pie or two. Now Jolly Old St.Nick is ready for his leap over the Atlantic.

Kids in Argentina spoil Santa’s reindeer after their long flight from Europe, leaving them hay and water to sustain them through the rest of the night.

In Chile, children leave pan de pascua for Viejo Pascuero, or Old Man Christmas. This special treat is a spongy, rich cake flavored with rum and filled with dried fruits and nuts.

Kids in the U.S. treat Santa to a buffet of cookies and milk as he heads across the country delivering his goods. The traditional treat is gingerbread, but sugar cookies, chocolate chip, and macaroons work just as well. And many kids remember Santa’s reindeer, leaving carrots and oats for them too.

Please play this music while looking at the photos– Thanks goes out to Wendy LeBlanc for sending me these photos..if you have photos–send them to me!!

Are you following our countdown to this year’s  Carleton Place Santa Claus parade?

Don’t forget to wear your Carleton Place scarf! Have you seen everyone wearing their scarves? Click here..to see all the photos! 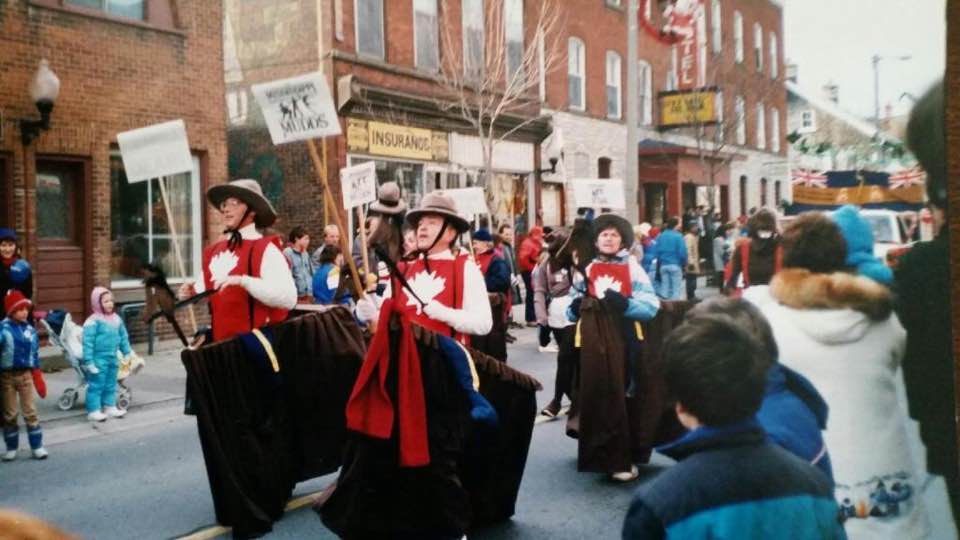 Check here every single day for new countdown photos! Base photos thanks to the Carleton Place and Beckwith Heritage Museum 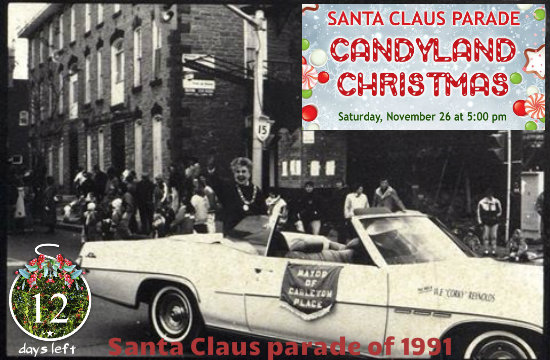 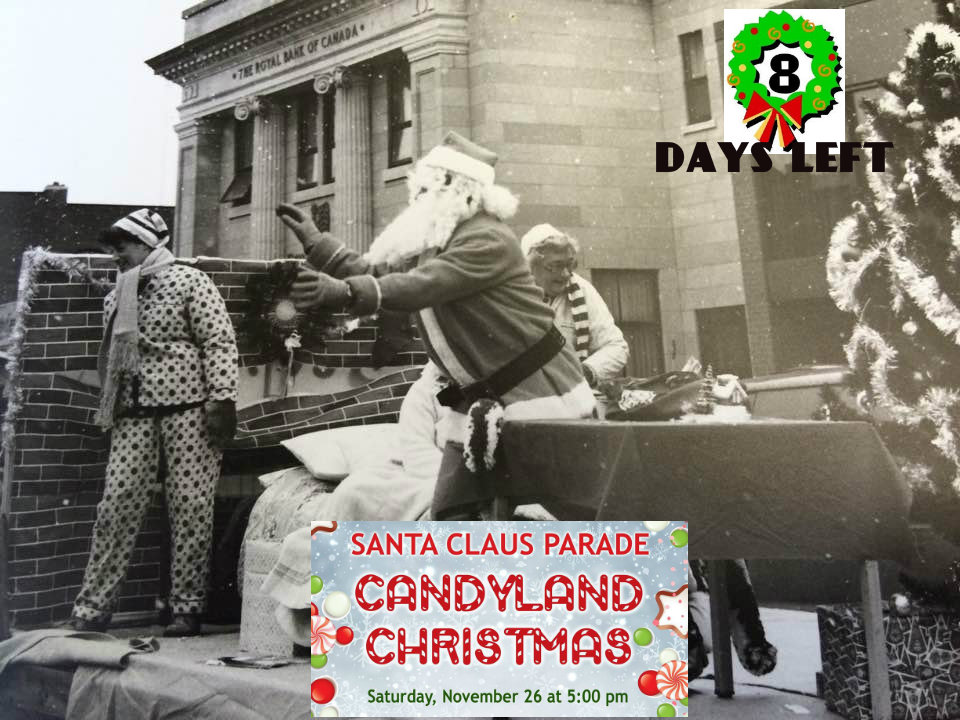 Can you see Jerry’s Bakery in the background? They used to make doughnuts in the window when it was Woodcock’s Bakery–1970s 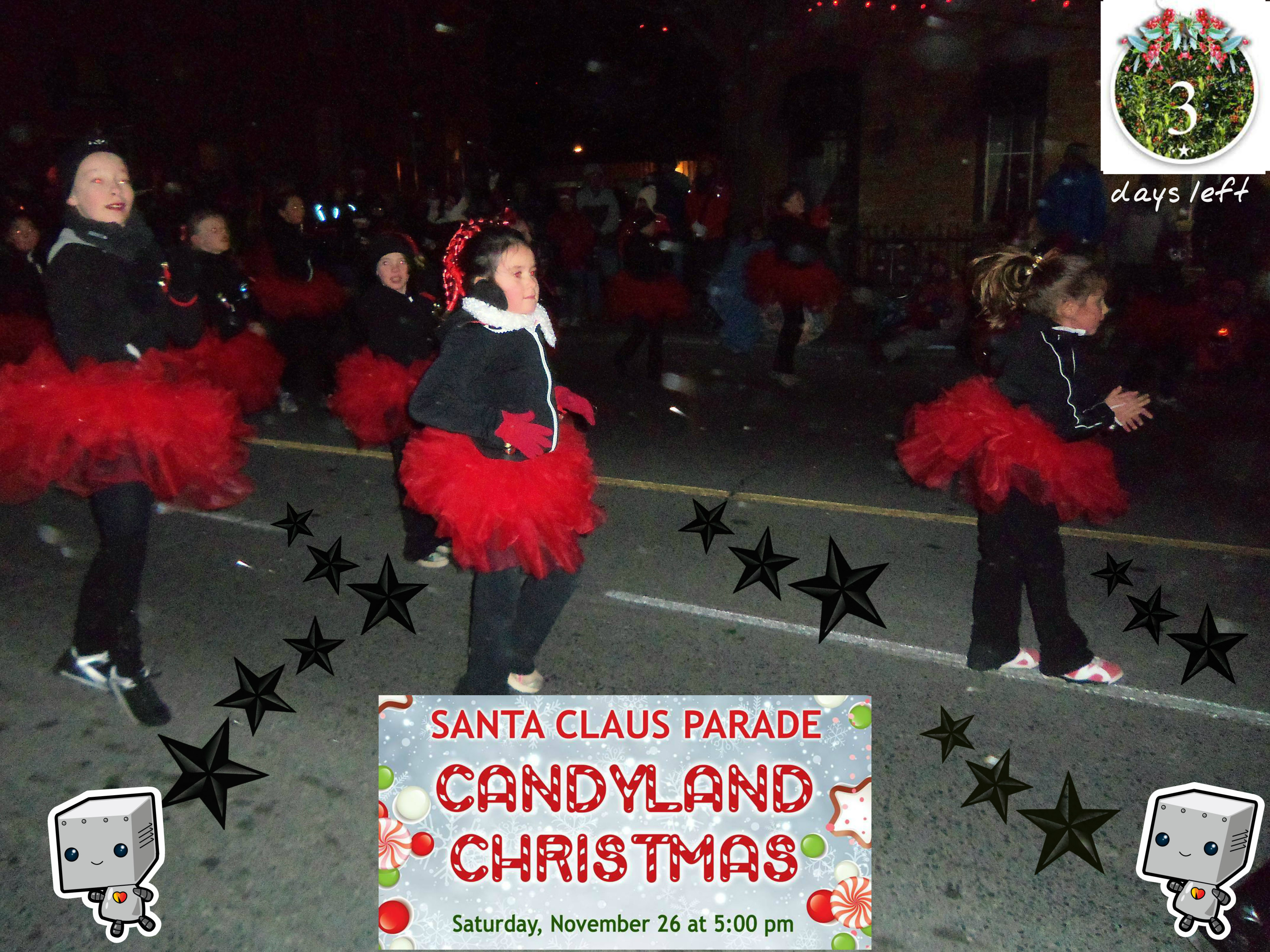 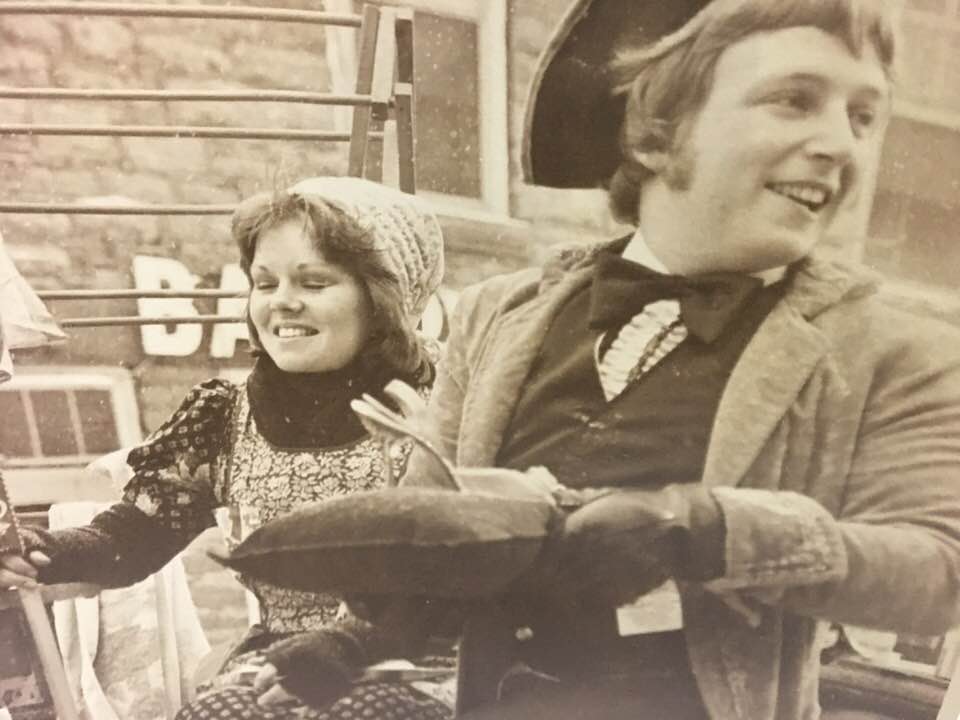 Terry Latham– Carleton Place Christmas Parade– It was a fairy tale theme. We did Snow White had to drive to montreal to get the costumes. Ralph Shaw as Prince Charming

The Gift of Christmas – Zoomer.