Llew Lloyd This picture predates the development of all the property on the river side of Bell street from the Anglican Church to the CPR bridge . It was a great time to live in that area. This picture also predates the two apartment buildings built between this property and the park across from the Anglican Church. The whole shoreline was our playground.

Stephen Giles Now there are three Houses built in the property

Sherene Baird Flint Use to love hearing the train blow it’s whistle as it went over the streets in that part of town!! It was great as an alarm to get up in the mornings to get ready for school!

The stone home on Bell Street was occupied by Miss Evelyn Wilson was built by her grandfather, Dr. Wilson. In 1834 the first Anglican Church was erected. It was a frame structure and in 1881 was replaced by the present stone building.

Rosamond built and lived in the stone home once owned by the Muirhead estate. He operated a woollen factory across the street, but had some dispute abort the lease on his property and in disgust left Carleton Place and established his business in Almonte.

Between the Muirhead home and Bridge Street there were the following businesses:

john McEwen’s weaving room, a confectionery store, a hotel first owned by Kelly, and secondly by McCaffery and third by Wilson. Waugh’s harness shop, Galvin’s Tailor Shop Willams and Halliday’s Drugstore. Gover’s Shoe Shop, a barber shop, and the Arcade on the corner of Bridge and Bell. Across the Anglican church, Campbell and Morphy owned a store and the post office occupied part of this store.

After Mr. Rosamond moved to Almonte, Dr. Hurd who had married one of the Rosamond daughters, lived in the stone home. He erected the long frame building across the street. His office and Sinclair’s office was on the ground floor, while he rented the hall above for concerts and penny readings. Between this building and Bridge Street was Tanner McNeelys home and back of it on the bank of the river still stands his tannery.

The Most Photographed Home in Carleton Place- Bell Street

Down by The Mississippi River with The Jessops

You will obliged by inserting the following in the Almonte Gazette. Having seen a letter by Mr. “O” of the Carleton Place Herald— first to the employers of the No. 1 Mill  and secondly in the interest of the workpeople. I think it should not pass unnoticed.

Mr. “O” says that girls have been placed to work as mules in one of the mills, and undoubtedly-he means instead of the boys, to save expense. This is positively an untruth, but suppose it had been true, where is the wrong; every man is justifiable in running any business as cheap as he can, as long as his proceedings are just and honest.

Again Mr. “O” says in the Herald— the girls have been worked nearly 14 hours per day. This only occurred once, and then by the girls’ request, and if this had not been the case, we think it quite out of place at this time when shortness of water has caused such delay, to mention the working of one quarter of a day overtime as a means used by the employers to find a living out of the poor.

Again Mr. “O”  refers to the fine of one dollar, deducted from the boys’ wages for absenting themselves from work without permission, and says that in some cases it amounted to nearly three day’s pay-(including the half day’s time lost).

This of course is another way whereby the rich live at the expense of the poor. Does Mr. ‘‘O” suppose that if a lad neglects his work for one half day, that three days’ pay makes up the loss, if the machine he runs stops one-half day, is not invariably the next process injured, and the third and fourth and so on; through the whole mill the delay is felt and the goods late in market and perhaps thrown on the sellers hands.

Where is the common reason of the thing, or the foolish parent who would encourage his children to pursue such a course?  Nothing but ‘‘ill will,” I think, could have induced M r. “O ” to. write such a letter. First, he tried the editor of the Almonte Gazette, but with an invisible success, and then came out in his true colours, manifesting a fair share of the avaricious spirit he speaks so much about, and resembling, in a slight degree, the principles of the Societe Internationale, as mentioned in the Almonte Gazette and injurious to the working classes of Almonte, generally.

How can the employees attempt to ask any favours of their employers, when such treatment is practised upon them, as to be publicly exposed and to have statements made in reference to them-which- is wholly untrue in a public newspaper, it is unnecessary. to ask to which side does the avaricious spirit belong, but does it not rather suggest to us how liable we are to err, and how many of us are there who have not committed actions and found the silent rebuke of conscience a sufficient punishment, and what we have done in haste we, have grieved over at our leisure.

Much more might be said, but we would be sorry to lie too personal or severe in our remarks: rather let us examine ourselves and see first if there is not a beam in our own eye to be removed, before we attempt to”take the note from our brother’s eye”, and if not let us so walk that the light reflected from our good deeds which shall show others the way wherein they should go.

Author’s Note- So why was there such a furor? Why was Mr. O’s letter printed in the Carleton Place Herald and not the Almonte Gazette?  Did Carleton Place still had bitter grapes about Rosamond leaving Carleton Place in 1866 for Almonte? Towards the close of their lease with  Mr. Boulton in Carleton Place Rosamond wanted to buy or rent the water power. The owner Mr. McLaren of Beckwith would do neither and the town council of Carleton Place was on the side of McLaren. Rosamond left Carleton Place in a huff for Almonte and it appears the media battle began. This letter was  obviously written by someone with great education and an instigator to be sure.

The Mississippi Valley Textile Museum (MVTM) is located in the annex of the former Rosamond Woolen Company in Almonte, Ontario. History click here

August 11 1871– Almonte Gazette- The employees of No. 1 mill had a gala day, on Saturday, their employers giving them a free trip to Ottawa. Two years ago they were treated with a trip to Brockville ; and last year they were taken up ‘the Ottawa as far as Portage-du-Fort. The excursion party consisted of about 350 persons, and was composed principally of the operatives of the firm, their relatives and a few invited guests.

Upon arriving in Ottawa they walked from the railway station to the Parliament buildings, and here, through the kindness of the Hon. Alex. Morris, they were shown every attention, and were taken through the chamber of the House of Commons, the Speaker’s Room, Library, Senate Chamber, and other places of interest about the buildings. Many of the excursionists visited the Chaudiere, the mills, factories, and other sights worth seeing in the capital, and altogether a most pleasant day was spent in ‘‘ doing” Ottawa. All present enjoyed themselves with the trip; and nothing occurred to mar the general pleasure.

What Do You Know About the Burnt Lands? 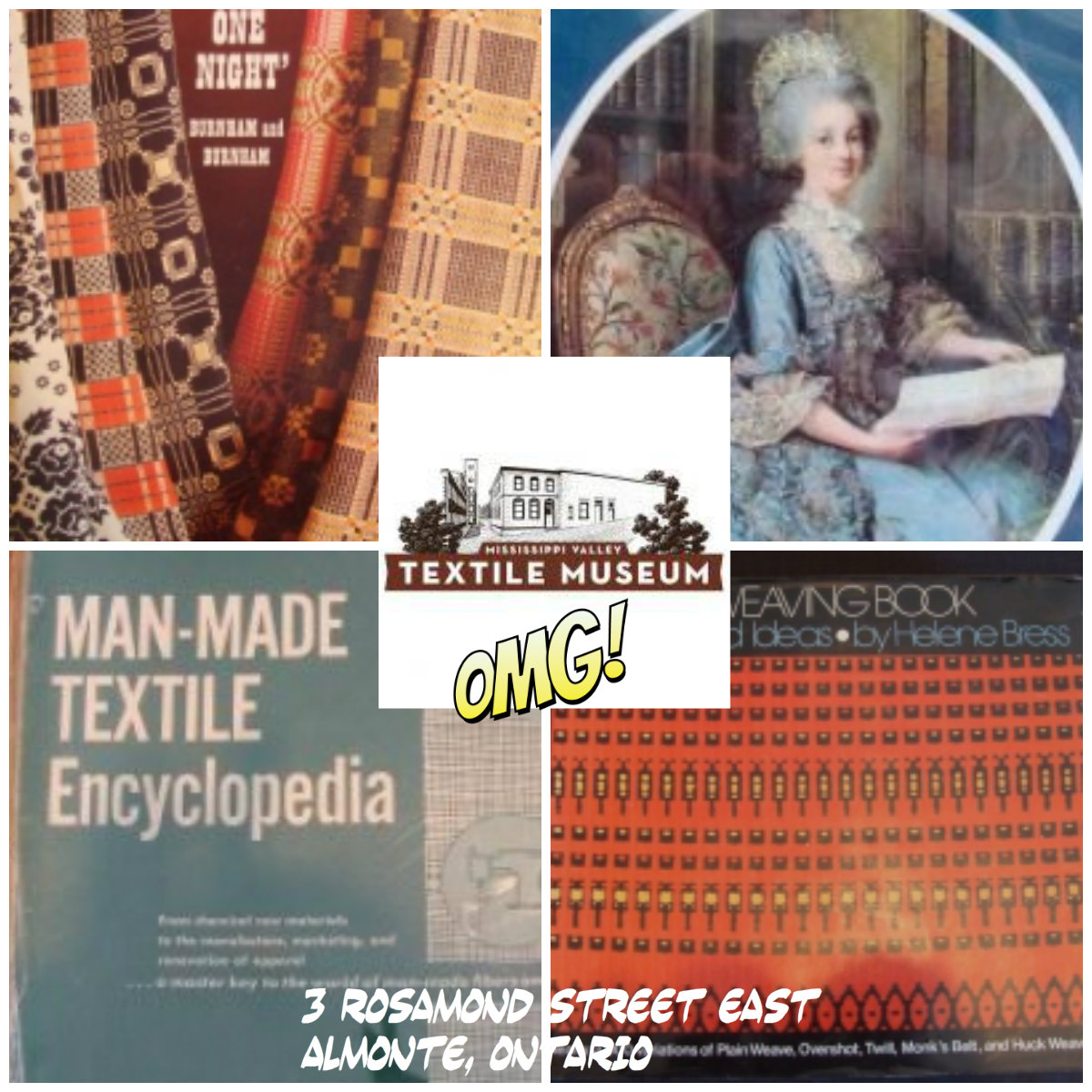 “I shouldn’t buy anymore fabric, if you saw the stash I already have”

“Yea! I just went through my fabric stash and got rid of so much stuff – now I can buy more”

Her choice of material tells the story of her life growing up in the house of a hoarder. As a youth in Israel, Nedivi lived among cardboard boxes and plastic bags filled with clothes and pieces of junk collected by her mother, who appears as the image of an old woman in many of the artist’s mixed-media art.

Have you seen this on the MISSISSIPPI VALLEY TEXTILE MUSEUM website?

If you are a textile fan you can now explore their collection of over 2,000 publications!!!!

Explore their exciting research library named after the MVTM’s first curator, Mary Lettner. This library is home to over 2000 books, periodicals, sample books, and research notes of the textile industry and the Mississippi Valley.

I saw this first hand and became verklempt to put it mildly!!

1938- Perth Courier–With reference to Almonte, Mr. Annable says:  “Almonte was the most natural spot for water development.  William Thoburn established, I believe, the first woolen mill at this point.  Then Bennett Rosamond built the largest broad loom on the river and brought expert weavers from Scotland to work in it.  Later he built his #2 mill and still later absorbed the Thoburn interests.  In the 60’s and 70’s the village and thus it soon became known as the woolen mill center.”

The Rosamonds Would Love You to Come and Shop Vintage!

Guess What I Found?–A Purchase from the Yard Goods Store

Tears of a Home -The Archibald Rosamond House