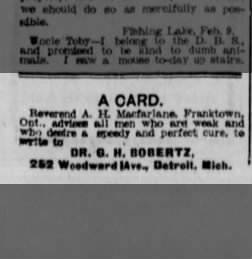 Looking for something else yesterday I found these odd ads in Candian Western newspapers in 1898. Rev. A. H  Macfarlane of Franktown was advertising some sort of cure  for weak and nervous men. The variety of competing nerve tonics was enormous business then. This reflected the fact they were one of the few affordable treatments for nervous breakdown and neurasthenia.

Many of these tonics used potent, poorly understood and often addictive ingredients. These included strychnine, morphine, opium, quinine, lithium salts and cocaine. I sense Macfarlane was advertising specifically in the west as he was not comfortable with his parishioners knowing what he was doing.

In 1899 Macfarlane was advertising in newspapers to send all inquiries to Dr. G. H. Bobertz of Detroit Michigan, who I found out was a prominent Detroit physician who specialized in nerve disease. Many nerve tonics were banned in the early 1900s when new laws required patent medicines to specify their ingredients, so like Dr. Howard of Carleton Place he had American distributors.

The Presbyterians of Franktown evidently believe that what is worth doing is worth doing well as is proven by the handsome structure that was on Sunday last opened and dedicated for all time to the worship of God.  For years and years “it was in the hearts of the people to build a house for the Lord” to supplant the old structure and not until a year ago did things take a definite shape.  The cornerstone was laid last summer by Rev. Dr. Crombie of Smith’s Falls and since that time to the present, the contractor, Mr. Wilson of Almonte, and the architect, Mr. Eady of Ottawa, have bent their best energies to produce a building worthy of the congregation at Franktown.  The edifice is built of stone—all from Beckwith—the cut stone being furnished by F. McEwen And Son of the Dominion Quarry.  The style is Romanesque and the appointments both in the auditorium and in the basement are perfect.  The entrance tot eh body of the church is in the south east corner, thus making good seating capacity inside although not occupying much space. The choir gallery, back of the pulpit, and the acoustic properties of the gallery and the whole church are of the highest order.  The basement contains a school room, a vestry and a library room.  The whole building is heated by a hot air furnace and gives perfect satisfaction.  Too much credit cannot be given to the building committee in connection with the church.  They are:  William Drummond, chairman; P. McEwen, Secretary-Treasurer; Messrs. D.R. Ferguson, Peter McLaren, Jas. L. McArthur, and Allan Cameron.   Although the weather was very unfavorable for the opening day, yet at both services the church was comfortably full.  On the platform were Professor Ross of Queen’s who took charge of the service; Rev. Dr. Crombie, the honored and aged Clerk of the Presbytery; and the faithful pastor of the church, Rev. A.H. McFarlane.  On Monday evening, the church was filled to overflowing the gathering being of a social nature.  The ladies of the congregation provided refreshments in the lecture room of the church and served tea from 6:00 to 8:00 p.m.  After ample justice had been done to the good things downstairs, the audience repaired to the body of the church where a musical and literary program of a very high order was rendered.  The pastor of the church Rev. Mr. McFarlane occupied the chair and in a few well chosen words referred to the building of he church and thanked the congregation of Franktown for the good and faithful work performed.  Mrs. James King of Smith’s Falls presented a communion set in memory of her father Duncan Ferguson, who labored so earnestly for Christ’s kingdom in connection with the church.  Mrs. Jas. L. McArthur presented a Bible and Mrs. Allan Cameron three plush chairs for the pulpit platform.  The speakers of the evening were Rev. Dr. Crombie and Rev. Mr. Cooke of Smith’s Falls, Rev. John May of Franktown, Rev. Paul Pergau of Franktown and Revs. Woodside and Scott of Carleton Place.  The speeches were sandwiched in between selections of the choir from Smith’s Falls.  The music was of a very high order and reflects great credit on Mr. Lavall, the leader, for bringing his choir to such a high state of efficiency. There is a mortgage on the church but with the cooperation of all, the time will come as Dr. Crombie said, he will be invited (the third time to Franktown) to set a match to the mortgage.  The ladies have already contributed $500 towards the building fund.  From Carleton Place there were noticed in the audience Mr. and Mrs. R.E. Box, Mr. and Mrs. H.M. Williams, Jas. Smith and Family, and Mr. and Mrs. James Knox, Mr. D. McLaren, Mr. Sutton, Hugh Robertson, R.J. Robertson, Dr. E. McEwen, Mrs. Rev. G. Woodside.  From Smith’s Falls, Mr. and Mrs. James King, Thomas Campbell and Misses T. and Maggie Campbell and Andrew Burrows. 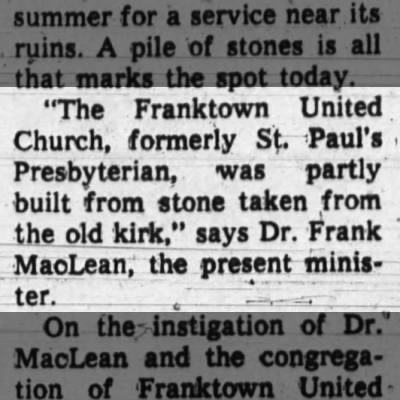 McArthur-McEwen—Married, at the residence of the bride’s brothers, Franktown, on the 9th Aug., by Rev. A. H. McFarlane, Mr. James L. McArthur to Miss Marion McEwen, youngest daughter of the late Mr. Ewen McEwen, Esq., all of Beckwith–Perth Courier, Aug. 18, 1893

Stewart-McNeely—Married, at the residence of the bride’s parents on the 9th Line Beckwith on the 5th(?) inst., by Rev. A. H. McFarlane, Mr. Peter G. Stewart son of Mr. Neil Stewart to Miss Annie McNeely, second daughter of Mr. Bryce McNeely, all of Beckwith.-Perth Courier, Dec. 15, 1893

It served that congregation for nearly twenty years, until the present St. Andrew’s Church building on Bridge Street, with its corner stone laid by the Rev. George M. Grant, Principal of Queen’s University, was dedicated and occupied in 1888. The connection between St. Paul’s Church of Franktown and St. Andrew’s of Carleton Place as one congregation under one minister and one session severed in the following year. The Rev. A. H. Macfarlane, father of J. Calvin Macfarlane, moved from Ashton to Franktown and continued to minister to the congregations at Franktown and Blacks Corners from 1889 until his retirement in 1913. 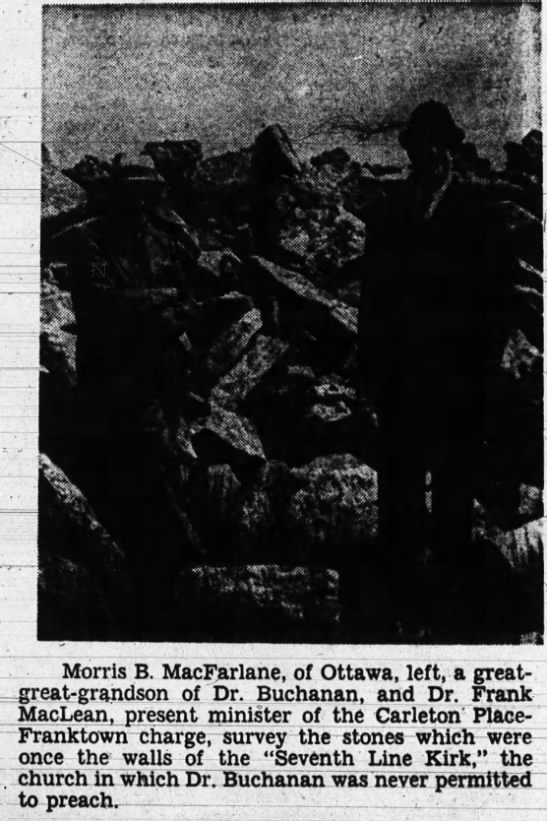 Dr. Hammonds Nerve and Brain Tablets for the treatment and cure of mens special diseases and all disturbances of the entire nervous system

Pain and weakness caused by weak nerves was considered typically English in the 1600s and 1700s. Gentleman of leisure Horace Walpole wrote to a friend in 1742: ‘I am afraid I have a little fever upon my spirits, or at least I have nerves, which you know everybody has in England.’ Until the 1800s, medicine to treat weak nerves involved herbal substances found in any apothecary’s shop. However, illnesses such as nervous breakdown and neurasthenia became widespread in the 1800s throughout industrialising countries of Europe and North America. Medical entrepreneurs, responding to this growing market for nerve medicine, patented and bottled nerve tonics made from secret recipes. ‘Tonic’ reflected a popular, though outdated, medical understanding that organs needed firmness, or ‘tone’, to work best. In this case those organs were nerves.

The variety of competing nerve tonics was enormous. This reflected the fact they were one of the few affordable treatments for nervous breakdown and neurasthenia. They had names such as Antineurasthin, Wincarnis, Hall’s Wines, Sanotogen, Tidman’s Sea Salt, VISEM, BYNO, Glycolactophos, Armbrecht’s Coca Wine and Bromocarpine. Many of these tonics used potent, poorly understood and often addictive ingredients. These included strychnine, morphine, opium, quinine, lithium salts and cocaine. Many nerve tonics were banned in the early 1900s when new laws required patent medicines to specify their ingredients.

The Shenanigans of Dr. Howard of Carleton Place – Part 2

A Monument Back in Time –Time Travelling in Lanark County