Thanks to all of you once again we have pieced a lot of the story about this house on Princess Street in Carleton Place.

Ted Hurdis said that when they were kids the local rumour was that an old lady lived by herself there. Rumours travelled far and wide that she never left the house and never let anyone in because she had money hidden all over the house.  Ted said that he never really kept track of the house through the years and remembers hearing at some point she had passed.  He said he wondered who got all that money because of the old childhood rumours.

Laureen Brunke-Doucett said— I have lived just up the street for 34 years, and there was an elderly lady who lived in that home. She used to walk past my house on her daily walks, but other than that she was quite reclusive. My recall is that she became ill, and her niece from Quebec moved her into a facility in Quebec and the home has been abandoned ever since. I believe that she left about 25 years ago. I never knew her name. 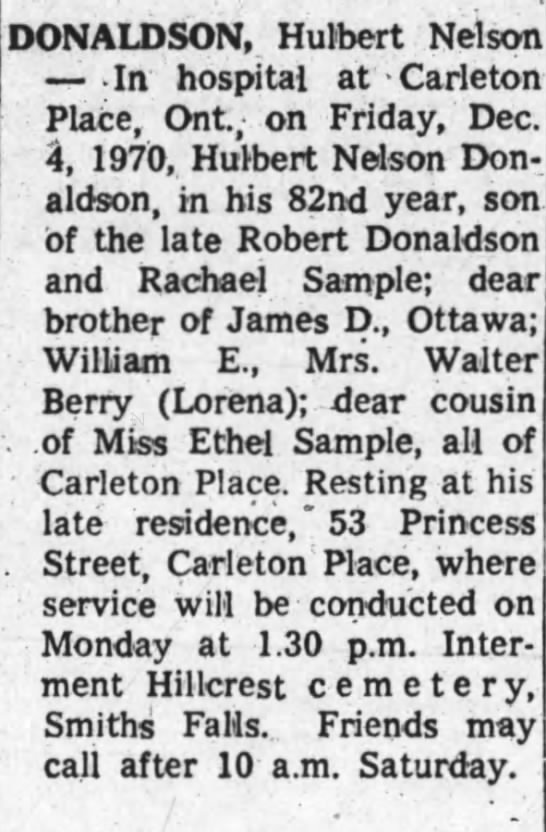 Miss Ethel Sample was a cousin of Hulbert Donaldson

Stephen Giles Laureen Brunke-Doucett, the woman you saw was Charlotte Garland, the daughter of Miss Sample.

Stephen Giles said– This house was owned by Holly Donaldson, brother of the Donaldson who lived across the street and Uncle of Mrs. Empey who lived at the corner of Princess and Lisgar St.

Holly had a roommate, a Miss Sample, who rarely left the property but would sit on the front porch in a rocking chair. As I recall she wore dark glasses as she was almost blind. Having grown up on the street I can honestly say that I may have seen her maybe 10 times.

After Holly died, Miss Sample’s daughter, Charlotte Garland, came from Shawville to look after her. I also remember Charlotte’s daughter Marie spending a few days every summer at the house. Eventually the Garlands sold their farm in Shawville and moved in full time. They lived there until their deaths when at that time Marie inherited the property. My numerous calls to Marie seeking to purchase the property in the years that followed were never returned. I understand that Abbie Hurdis who lived behind the property also attempted to purchase it but he was also unsuccessful.

Donovan Hastie– I grew up around the corner from that house and they used to tap the maple trees that were beside the sidewalk in the spring. There were also raspberry bushes to the left of the house that I enjoyed. Charlott and Ernest also had chickens there too I believe. There was no  shortage of heat when the wood stove was rockin’ either.

Stephen Giles– The wood stove was fired up all year long!! It would be 30C in July and it would be like a furnace in the house.

Lise Heroux– I am currently working on the story of all the people who have lived in this house, owners and otherwise. It is a far-reaching and beautiful story. The house has been passed down through a set of relatives since 1884.–The old lady some of you remember was Ethel SAMPLE. She lived to the ripe old age of 95 and died in the Carleton Place hospital, in 1980.  She had been born and grew up in Montague Twp, on a farm. Ethel had inherited the Princess St. house from her younger sister, Annie.

Stephen Giles Interesting…didn’t know that she owned the property. I guess Holly was a boarder….

If you can add anything to the story email me at sav_77@yahoo.com

and let’s see if we can do this again and create the history of this forgotten home.

Jennifer Fenwick Irwin asked:  It’s on the east side of Princess, between Lisgar and Sussex and has been empty since I moved her 20 years ago…

So what can you tell me?