Over 300 birds have been entered for the Carleton Place Poultry Show, open Thursday evening and Friday all day and evening. Some of the handsome prizes are on exhibition in Mr. F. C. McDiarmid’s show window.

The poultry show in Carleton Place last Thursday and Friday brought a couple of Almonters to the front with the birds of Mr. Fred Blake 1 and Mr. Jas. Gilmour winning several prizes. Mr. Blake was successful in capturing the Wm. Thobum cup, besides winning five firsts, five seconds. Mr. Gilmour won the Robertson cup, two firsts and three seconds. Mr. Blake has entered 2 I twelve birds in the poultry show at Gananoque this week.

Perth Poultry Fair—The quantity of poultry that changed hands at the fair at Perth this year was much smaller than that of last December.  For a variety of reasons there was less raised by the farmers this season that usual while last year’s product was an exceptionally large one.  The amount bought this year was about 40 tons.  Of this, Messrs. A. Meighen Brothers and Messrs. A.R. McIntyre & Co. secured 11 tons and Wilson and Noonan 7 tons.  However, a carload of live turkeys were shipped earlier in the season to New York by various buyers and other lots were shipped up the C.P.R. by A. Meighen Brothers, etc., so that the whole product this year would probably aggregate 60 tons.

But if the quantity this year was smaller the quality and price this year were better than last.  The second day figure for turkeys was 12 cents and 13 cents and a few choice lots brought 14 cents.  Geese brought the highest prices of the average.  There were more buyers here than at the fair but some were so scared at the prices that they never bought a pound of stuff.

On the whole, the fair was a good one and profitable to the farmers.  Mr. Robert Lawson, Jr., of Middleville sold to Messrs Meighen and McIntyre 662 pounds of turkey at 13 cents and 131 pounds at ten cents.  Mr. Thomas Frances near Lanark Village got 14 cents a pound for his lot of turkeys.  Mr. William Purdon, Jr., Dalhousie had another fine lot of poultry one of his turkeys weighed 22 pounds.  Mr. David Ferguson, 1st Concession Drummond, sold 38 turkeys to a private party in town at 14.5 cents a pound.  He sold ten besides at $3 each for brooking purposes next year.  He lost about 50 young turkeys this year through foxes.  Mr. John Doyle, Drummond, sold his geese for 12 cents a pound.  This is the best we have heard.

Maberly News:  Mr. Rigney took in and shipped a large quantity of turkeys and other fowl last week.  —  Thomas Strong had a turkey shoot on Thursday.

Lanark Links:  The sleighing has been very fine for a few days and as a result business has been quite brisk.  The farmers are taking advantage of it and the streets of our village are thronged with sleighs.  Should this snow remain Friday will be a very busy day being the one appointed for the turkey fair here.  Generally that day is a very important one for the ladies of the surrounding country and they may be seen with their loads of poultry trying to secure the best possible returns for their labors in that line during the summer. 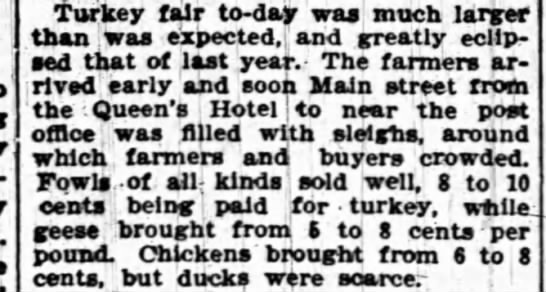