Photos from Perth Remembered  (old bridge near the hotel)

Easter weekend in Innisville was not only visited by the Easter Bunny, but by millions of pickerel headed upstream to spawn. No finery was needed for the event, just pack your pants, jackets and some rubber boots.

The old bridge was jammed and the rapids were full with spawning pickerel swimming the seven miles to Mississippi Lake. Just after sundown the run began in the 42 degree water temperature with people from all over Lanark County and as far away as Ottawa and Toronto.  Most of them had flashlights and waited along the cold damp river bank for the ‘show to start” where the 8 inch water lapped at the shore. For as far as they eye could see, all the way to Ferguson Falls, was a seething mass of fish eyes in the murky water like lights on a pinball machine. When they complete their spawning cycle they returned to Mississippi Lake leaving the river’s rocks and vegetation with clusters of eggs.

All this was the result of stocking the river for over 20 years by the Conservation Club– The Carleton Place Fish and Game Club– that would lead to year after year of a prosperous  pickerel season that began on May 9th. The Department of Fish and Game was there to make sure people did not scoop pickerel up, as it was easy as that to get yourself handfuls of fish. Wayne Robinson and Percy Headlam were on the job in the late 1940s making sure you didn’t fill your pockets although rumour was there were many a pickerel dinner had around the area when they began to spawn. In 1949 there were plans to build more cabins around Innisville for all the folks that came up for the Pickerel season. Innisville was more than a passing few homes and general store- it was on the map during those days.

The first run began in 1910 when Herb Phillips of Smiths Falls and George Burke of Perth placed 38 adult Pickerel in the Innisville Rapids. Legend says *Mrs. W. P Kilfoyle, or “Ma” as most people knew her, had probably seen more pickerel than the whole village combined. She faithfully watched that migration every single year rain or shine. For a short time there were two bridges, the old structure and the new one, and both held thousands of people as the annual pickerel run got underway– it was the largest run in Eastern Ontario but the pickerel through the years *disappeared. In 1972 it was reported that it was a disappointing year and they blamed it on ice fishing, lights from the cottages, and the new Highway 7 $200,000 Bridge over the river for the scarcity of the fish.

*So why did they disappear?

Call it the case of the missing walleye. Ol’marble eyes, anglers’ No. 1 target and the ultimate shore lunch, is disappearing from some lakes in northwestern Wisconsin.

Adult walleye populations are dropping in these lakes and natural reproduction is sputtering. The stocking of small fingerling walleye, successful in the past, is netting next to nothing.

Frustration is setting-in in some communities where walleye has long been king of the creel and a top tourism draw that feed the local economy.

“The number one complaint I hear from anglers locally is, “We want our walleye back,” says Heath Benike, DNR fisheries biologist for Polk and Barron counties since 2003.

“We’ve tried increasing our walleye stocking rates and adding more walleye spawning habitat, and that did not help increase walleye survival or solve the existing problem.”

Right now, the leading suspects are:

Popular sentiment and some fish biologists finger largemouth bass as the leading suspect, but there’s no smoking gun, says Steve Avelallemant, a DNR fisheries biologist in northern Wisconsin for the last 25 years and top fisheries supervisor in the region.

Thanks to Nancy Hudson.. she has sent us two photos.. Thank you Nancy!!–Here are a couple of pictures to go along with your Innisville theme today. The aerial shot was taken in 1958-9 when the current highway 7 was being built. The other is of the village bridge which was taken down in the late 70’s. My grandfather, Walter White and later my parents lived in one of the Ennis homes in the village. 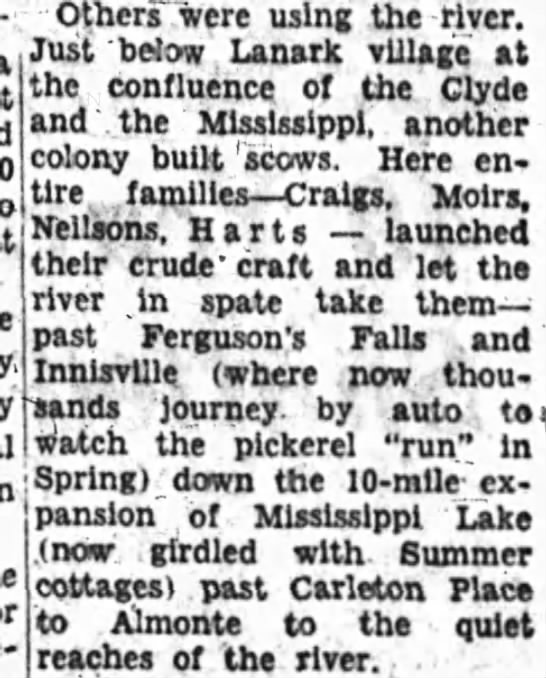 The Innisville Bridge-–The Innisville bridge under construction in 1958-1959 was built by a Company owned by my Father, Willys Armour, Beckwith Construction Co., Ltd., of Carleton Place. Somewhere I have old colour movie footage of the construction and old F100 trucks etc. The company was originally located on Mill St., then moved to Flora Street.--John Armour

Elsie McLaren Kilfoyle, affectionately known as ”Ma” around her native Innisville, died suddenly March 16 in Carleton Place and District Memorial Hospital after a short illness. She was in her 82nd year. Elsie was born Jan 22, 1895 the daughter of the late James McLaren and his late wife, the former Eliza Ann Morris. She was educated in Innisville and on May 7, 1919 she became the wife of Willard Preston Kilfoyle who predeceased her in 1958.  Mrs. Kilfoyle was an active member of St. John’s Anglican Church, Innisville and worked hard in the Women’s Auxiliary and the Women’s Institute. “Ma” Kilfoyle is probably best remembered for her weekly social columns in this newspaper and in The Perth Courier and The Smiths Falls Record News. For more than 40 years Mrs. Kilfoyle wrote about the happenings in and around Innisville, telling about the visitors, the births, the deaths and the marriages, even how the fishing and tourist seasons were as compared to other years. She is survived by three sons: Stanley of R. R. #3, Perth; Wallace of Ottawa and Murray of Carleton Place. There are also seven grandchildren and six great-grandchildren as well as a niece, Joyce McFarlane.  One son, Jerry, died in a car accident in 1968.  The funeral was conducted from the Alan R. Barker Funeral Home, March 19 at 1:30 p.m. with the Reverend Allan Gallichan officiating. Burial was at Franktown. Pallbearers were David, Ricky and Wayne Kilfoyle, James Carruthers, Allan Crampton and Frank McGregor.

Tales of the Innisville Hotel

Back Where I came From — Innisville

In March I wrote about the adventures John and Leonard McNeely and how they got themseves one heck of a catch of pickerel.

Allan Lewis— This is known as the “Mississippi Lake Feeding Frenzy”. My cousin, Garry Burns (was from Carleton Place) and I ran into this phenomenon once on a very hot August day, in 10 feet of water. The pickerel were almost jumping into the boat. It lasted for about an hour. A great day on the lake!

Gail Sheen-MacDonald-– The fish population diminished very quickly. The department of Lands and Forests put in concrete cribs at the rapids to encourage spawning to try to get the Pickerel back. All that succeeded in doing was to block the flow of the river and provide a nesting place for the sea gulls. The gulls created a tremendous problem polluting the river and making swimming extremely dangerous. One of my friends almost lost his life due the bacteria from the bird feces that attacked his heart. I attended many meetings of the Mississippi Valley Conservation Authority to see what could be done. As it turned out, there was money to put the cribs in, but none to remove them. It is also against the law to shoot sea gulls even though many residents and cottagers wanted to to just that.

Sue Doran— So many memories of the pickerel run! WOW! My parents’ place was on the shore between the 2 bridges, across from the Crampton property, so lots of stories could be told about the pickerel run!! My lips are sealed, however! LOL
remembering going with my family to watch the RUN.. I remember the old bridge too & swimming in the rapids. Good memories of attending the one room school – now a Museum in Innisville !!

Gary Barr— there must have been millions of pickerel as they literally covered the riverbottom at the bridge and all you could see would be a solid layer of fish eyes, side by side, caught in the flashlights of onlookers.

Nancy Hudson– It was THE event in the village when I was young. So nice to see these familiar faces. I can just pick out my familiy’s home in the upper picture.

Dave White —I remember the Pickerel Run was crazy. All kinds of people on both bridges, cars parked everywhere, the store doing a booming business. And yes, all kinds of Game Wardens around. I remember we tried to play road hockey when it was on. Bad idea! That’s where the yelling of “Car!!!” came from. The police finally shut us down. It was a huge event in the ‘Ville.

Ron Thornbury– To think, now they have extravaganzas like Orca World, Sea World and the like. Back then we all got into the old Monarch to drive out to Innisville to watch fish swim.

Ross Allen– I came to Perth in Jan. 1970. saw my first run in Mar. of that year. couldn’t believe the number of fish, their eyes flashed in the flashlight beam as far as you could see.

Heather Revill— Remember this well. A yearly trip for my father and I. Forrest Richardson telling Dad to be sure to leave his spear in Perth.

Stephen Fortner— A sign of spring in Perth was spearing red fin suckers in the Little Tay and up at Dam. At James Brothers we sold the spear heads. There. Was also some illegal speaking of pickerel that went on as well.

Cathy Hansen-– Was an annual event and as a child Innisville seemed like such a long drive.