In the mid 1860’s you probably would grab a drink in Carleton Place:

Then there was the Carleton, which was built by the Bells as a hotel in the 1830s, then bought and reopened as The Carleton by Napoleon Lavalee in 1846. Peter Salter renamed it The Leland Hotel in 1900 and then it was operated by the Doyles from 1904 on until converted in 1955.

Also well known was The British Hotel which was owned by William Kelly and then became Vic Bennett’s Garage which was at the corner of Bridge and High Street. There was also the Ottawa Hotel, the Ontario Hotel and Lee’s Hotel which was the South East corner of Moore Street railway crossing. Absolam also had a small tavern on the north side of Bell Street from 1863-1870. There were six livery stables which furnished horses and all kinds of first-class rigs for business or pleasure.

In 1904 Carleton Place’s eight hotels were:

With files from Howard Morton Brown

If I get one good summer day in a summer, and I am out driving around on that summer day, I am content. I therefore declare the summer of 1947 to be a success. Such a day occurred on Civic Holiday. When I whipped in my Fireball motor over the highway  Monday night, I was singing along with Carrie Jacobs Bond: “When You Come to the End of a Perfect Day.” Do you want to know my recipe for a perfect day? Well, this one had everything in it from sunshine to smorgasbord.

When I had started to high tail it through from Smiths Falls to Carleton Place I remembered Sven Larsen and his invitation to try a smorgasbord at the Queen’s Royal, Carleton Place.

Now those of you who know this Scandinavian ritual will realize that it sounds as improbable that you would get a smorgasbord in Carleton Place as you “would get bouillabaisse Marseillaise at Ka-zabazua”. But I wheeled into the Queen’s Royal, and ordered up a smorgasbord.

In case there are people unfamiliar with this kind of meal, I should explain that it is sort of hors d oeuvres on a Gargantuan scale, and that it is a full meal in itself. We had salami, and smoked salmon, fresh tomatoes, and pickled herring. Many people do not know that the “smoked fish” they eat is eel! It is caught in the Richelieu river, brought to Ottawa for smoking, and relayed to Carleton Place.

You may have heard of tropical ants that over-run an elephant who is lying down, and who five minutes later leave only a skeleton. Well, the ants are sluggards compared to our family, for we left nothing. The smorgasbord a la Larsen was a great success. This with ice cream garnished with fresh (yam yum) peaches, and I was willing to call it a day. 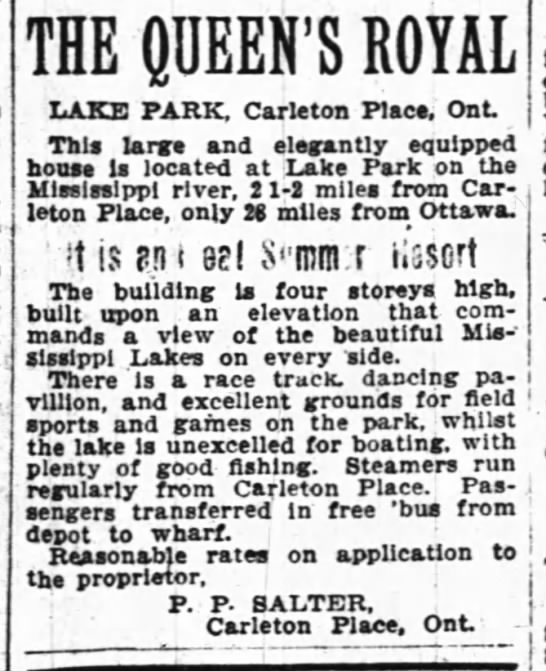 It was only then that I had time to look at the hotel. It was originally operated by Peter Salter, who used to operate the Bodega in Ottawa, and whose son Hubert, was a great favorite with the Ottawa (Lisgar) Collegiate boys, as well as being an all-round athlete. In any event, the hotel stood idle for a long time, till the Larsens got hold of it. It faces Mississippi Lake, a sportsman’s paradise if you like ducks, fish, or boating.

In front of the hotel is wild rice, specially sown to attract ducks. Wild rice with ducks or geese about Thanksgiving is a great delicacy. I do not know if you can buy wild rice here, but a couple of places in Montreal sell it. Anyway, the ducks get for nothing what we pay more than a dollar a pound for. The hotel, with the croquet, its badminton, and its loafing chairs give you a great chance to do little or nothing in a delightful way.

Furthermore, there were restrictive covenants on properties preventing them from being sold to Jews. As well, many clubs, resorts and beaches were barred to Jews. Signs warning “No Jews” or “Christians Only!” could be found on Halifax golf courses, outside hotels in the Laurentians and throughout the cottage areas of Ontario, the lake country of Manitoba and the vacation lands of BC.

Although I have no “personal knowledge” of such signs, I have been told from a few people that locally they remember seeing them at Lake Park Lodge

Tales from Lake Park– A Disabled Motor and Manslaughter

Duncan McIntosh and operated as a hotel under the name of McIntosh House, it was bought in 1882 by the widow Mary J. Chatterton. By 1886 she has sold to Peter Salter, who ran it until about 1890. The Chatterton House Hotel guest register dating from 1886 to1889 was transferred from the City of Ottawa Archives Photo to the Carleton Place & Beckwith Heritage Museum

Mrs. Mary Chatteron was the mistress of flirtation and also had rather a large appetite, and she is one of my favourite people of Carleton Place. She owned what is now the Queen’s Hotel for several years in the 1800’s. As legend goes, Mary Chatterton ran a lot of her “Chatterton House” in the Queen’s Hotel alleyway. It was well reputed that Mrs. Chatterton served more than alcohol to her clients!

An advertisement for Chatterton House read: “the proprietress has spent a large portion of her time in catering to the wants of the travelling public and this house has become justly famous for its good cheer and pleasant associations.”

She later sold it to Albert Salter. Mr Salter according to newspaper reports in June 1 of 1899 had reconstructed the old Chatterton House with a veneering of brick- raising it two stories and added a large wing. Obviously that was not working out.

On the 20th of October 1899 it was noted in the newspaper that Mr Salter, proprietor of the well known Queen’s Hotel in Carleton Place had disposed of the property, with Mrs Chatteron once again being the purchaser. The price was noted being up into the double tens with five figures.

The newspaper account reported Mrs Chatterton had conducted a business on the same site some years ago and was a most amiable and obliging hostess. Mr Salter had purchased the property from her and added much to the accommodations to suit the requirements of the times. “He retires after a successful career and will devote his energies and wide resources to the perfection and personal superintendence of the Queen;s Royal hotel at Lake Park which will be enlarged and greatly improved in many respects before the opening of the news season. In the meantime he and his family will live privately in town.”

IN 1900 Albert Salter gave up the then Queen’s Hotel and it looks like he was a hotellier of all trades. It was documented in the newspapers that he took possession of the Revere Hotel which was on the corner of Bridge and High Street. That seemed odd as in another newspaper report it was mentioned that in 1900 Mr J Mc Claren of Perth bought the Revere Hotel had bought the hotel for $2700. So it seems Mr. Salter was micro managing many businesses, running the place, and did not own it. Nothing different than what happens in today’s world.

On 7 Nov 1900 the Ottawa Journal reported that Mary Chatterton had taken over the complete management of the Queen’s Hotel. There was no word if the alleyway business re-opened. Today I found more genealogy about the family, so documenting it.

One thing about Mrs. Chatterton who owned the Queen’s Hotel among other businesses– she owned a lot of local property
Clipped from The Ottawa Journal, 08 Sep 1905, Fri, Page 11

Child of MARY NEELIN and JEREMIAH CHATTERTON was:

James (Hilliard) MacDougall was the son of Duncan MacDougall and Harriett Hill. He was born November 6, 1866 and married Eva Chatterton on November  14, 1894 at St. James Church in Carleton Place.
Perth Courier, November 30, 1894

McDoogal-Chatterton—Married, at Carleton Place on the 15th inst., at the residence of the bride’s mother, by Rev. Archibald Elliott, rector of St. James Church, Mr. J. Hill McDoogal to Miss Eva Chatterton, only daughter of Mrs. M. Chatterton.

There was a discrepsency of course where they were married. Was it at St. James or her mother’s home.
James Hill MACDOUGALL and Eva Chatterton had 6 children.

Seems like Mrs Chatterton lost her child or they had been fighting over her before his death.. Perth Courier, March 31, 1882
Life Insurance—The late Mr. J. Chatterton of Carleton Place had taken out an endowment policy for $1,000, designating the payment of the sum should go to his little daughter Eva on his decease. An order has been issued by the High Court for the payment of the sum as soon as the guardian of the child has been appointed.

Hell on Wheels at Lady Chatterton’s Hotel in Carleton Place

Searching for the Red-Headed Wench of Carleton Place