Rarely does a property cross our paths that excites us as much as our latest listing – 19 Allan Street. This stately riverfront Victorian three-story home is overflowing with charm and character that you just don’t get in a new build: built-in linen/china cabinet, 9-foot ceilings in main living areas, wainscoting, a dreamy second floor balcony, picturesque front porch, and even original pocket doors (yes! Pocket doors!). But this 1912 red brick beauty offers more than just old-world charm, it’s been meticulously cared for and lovingly updated throughout the years by the current owners.  The formal dining room has been where Sunday dinner has been served for an increasingly growing family over the last two decades.

This home is more than just a beautiful property – it’s an integral piece of Carleton Place history. Edmond Morphy, one of the first European settlers to inhabit this area, built his first log cabin on this site in approximately 1820 for his wife and eight children. (It’s worth noting that Carleton Place is located on unceded Algonquin First Nation territory).Some of you may know that Carleton Place was originally named Morphy’s Falls after the Morphy family. The town’s name was later changed to what we know it to be today, in honour of a famous square in Glasgow. When the current structure, 19 Allan Street, was constructed in 1912, the Morphy family log cabin was torn down. The industrious Peden family lived in this large Victorian home, and many of the original features remain today. Historical records show that Adam Robert Graham Peden (1849-1931) made ginger beer in the basement. To this day, there is a pipe that goes a quarter the way to the river from the basement, and back then water was drawn by a hand pump. The current owners discovered some the original glass bottles which are marked “ARG Peden”, and more Peden bottles are currently on display at the Carleton Place and Beckwith Heritage Museum (276 Edmund Street in Carleton Place if you’d like to see them in person!).  Adam R.G. Peden owned a soft drink bottling plant at 150-152 Bridge Street, which is the modern-day location of Capital Optical Eyewear.

A town landmark adjoining the home of A. R. G. Peden on Allan Street was removed when the ruins of the large log house of Edmond Morphy, a first settler at Carleton Place, were torn down.  It was said to have been built about 1820.

The incorporation of Carleton Place as a village took place in October, 1870, with a population of 1,226. We now have about a thousand more people than most towns in the Dominion had when they designated themselves as towns by acts of incorporation. Our civic affairs are entrusted to a reeve, deputy reeve and three councillors. These at present are Reeve William Pattie (building contractor) Deputy Reeve, William Kelly, (retired hotel keeper), and Councillors James Warren (blacksmith), Alex Steele, (tinsmith and stove merchant) and Abner Nichols (planing mill owner). The clerk of the Council is A. R. G. Peden.

The Sad Tale of Alexander Gillies and Peter Peden

Archibald Peden from Carleton Place sent a note to A.H Heayes Esq. In Boston, Mass. March 30th, 1883. It was stamped “answered” and from the notation on the envelope it is an inquiry about a lot. In doing some research Albert was a real estate lawyer.

So who owned this business A & S Leach in Carleton Place and where was it? It was run by Abner and his oldest sister Sophia Leach who was 15 years older than him.. Their father was a widow ( his wife was Alice Salter Leach and died in 1871)and the two siblings ran the store. In 1891 Sophia Leach was 30 and unmarried probably because she looked after the rest of the family as she was the oldest. She died in 1898 at the age of 37 and that is probably why the store closed. The whole family is buried in the Franktown Cemetery.

The Leach siblings took over the Peden Grocery business in January of 1898 which is where Hastie and Tatlock used to be on Bridge Street, which some call the wrong side of the street. ( don’t ask).Peden also made carbonated drinks there.

Seven months later in October Abner Leache filed for bankruptcy ( Sophia died August 1898) and Lang & Company from Ottawa bought their stock. Lang & Co were basically in the pork business and London House was briefly a clearing house where they bought bankrupt stock and resold it. It was located on Wellington Street in Ottawa.

London House in turn went bankrupt in 1901 and the Larose Dept store on Rideau and Sussex bought the lot and sold them at their stores.

The Sad Tale of Alexander Gillies and Peter Peden — READ

The Life of a Messenger Boy Before the Internet

Lorraine Nephin just sent me this .. thank you
Beatrice Saunders age 17. Later she married Howard Sadler. They ran a fruit and vegetable farm in Almonte

Lila Leach-James-— Beatrice’s brother was James Saunders and married my fathers older sister, Eva Leach and they lived in Westboro…..He designed and was in charge of building many of the railroad stations in Ontario! He designed his beautiful stone house which I believe is designated heritage and still standing at 300 Elm Grove Avenue, Westboro….

Jim Saunders had a barn in his back yard! Nowadays that would not be allowed! His hobby was raising chickens, exotic breeds. They were every colour and design! He won many ribbons at the Royal Winter Fair in Toronto…He had many, sometimes 50 different breeds! The ones that didn’t win sometimes found their way up to our farm!

This is a photo of James and Eva Saunders….probably taken in early 1900’s…I remember being at their 50th anniversary around 1960….

Jason Porteous I have a copy of this picture of her parents. I got it many years ago and can’t remember who shared it with me. Its of Albert Saunders and his wife Minnie Hoerle.

Jennie, Violet, Florence, George Saunders at their grandmother’s house near the CPR station in Carleton Place. They were the children of William Joseph Saunders and Emily Tanner and the grandchildren of Robert Saunders and Marie Anne Lewis.

The photo posted is from the Porteous family collection. I have put up other photos before taken by Pat Allan’s Mom, Muriel (nee Porteous) but this is from Jason Porteous’s family photo collection. Thank you for preserving history! Amazing photos!

Beatrice Saunders Sadler who married A. H. Sadler from Almonte- They had three sons Bruce Sadler , Karl and Ray and Bruce Sadler was mayor. Jemima Saunders Peden would be her aunt. (Deborah Coutier info)

Mary Peden 1920s Carleton Place- Photo property Linda Seccaspina–I thought this was a photo misprint.. I stand corrected. Thanks to John Edwards and then the sleuthing of Jennifer Fenwick Irwin.. this is Mary Peden from Bell Street in front of St. Paul’s in Almonte and not St Jame’s in Carleton Place. Never assume just because the others were taken on Bell Street that this one was too said the pigheaded Linda

Doug B. McCarten The Peden store was on Bell St. on the south side…seemed to me that you had to step down to enter the bldg as it was lower than the street.Exactly as I remember it! Really dark inside if I remember correctly! The penny candies were terrific 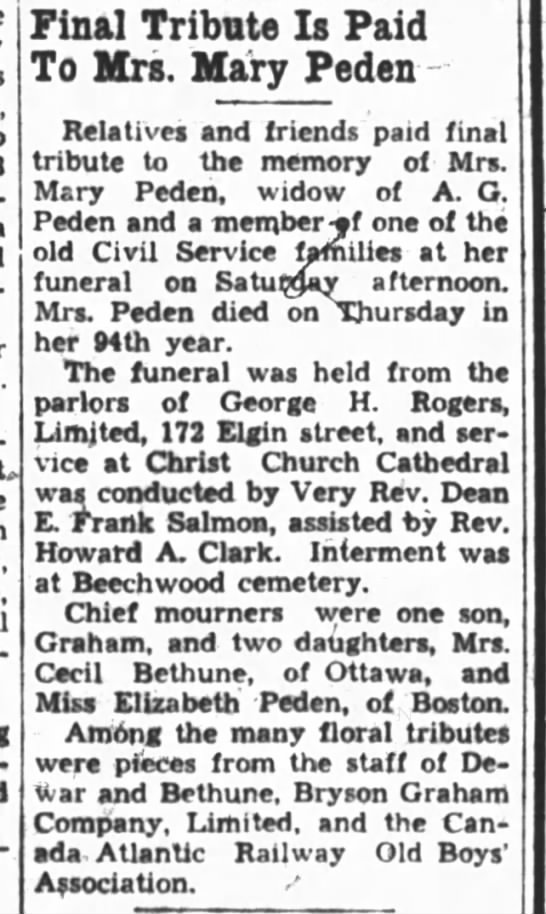 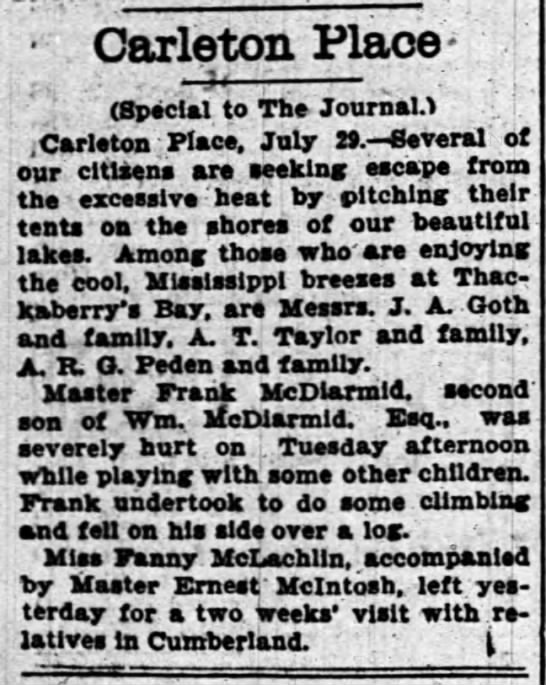 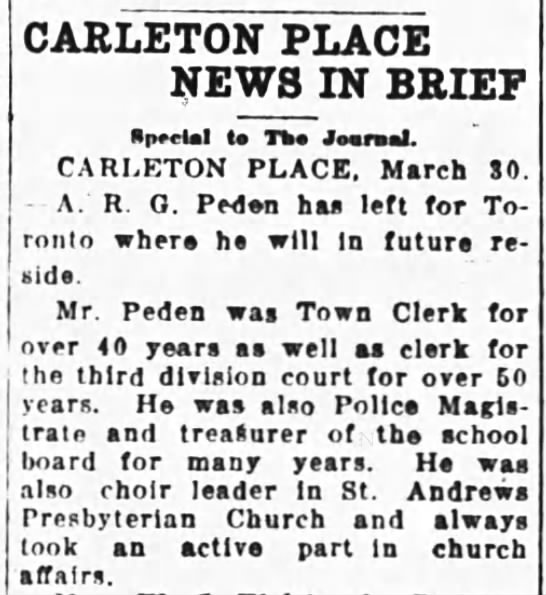 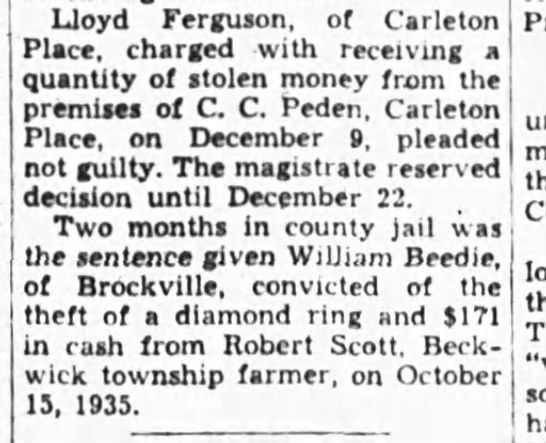 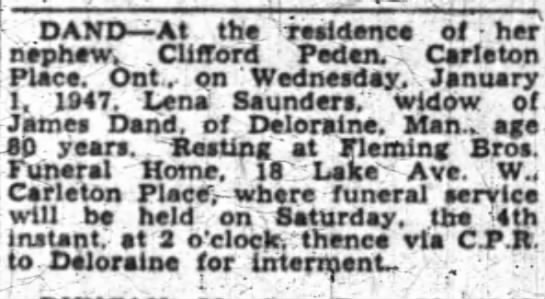 After I wrote about the Peden store months ago I tried to figure out in my mind what it looked like as I couldn’t remember it.  I went back and read what John Edwards had written and tried to imagine.

The Peden store was in fairly dilapidated condition in the 1960’s and ’70’s. It looked as if it was sinking into the ground but in reality the street had been built up over time to cause moisture to run into the building (it was in the lowest part of town and likely susceptible to flooding.) and this accelerated its demise.

The picture of Bell St. above dates from 1863. I believe the Peden Store was the bakery in the photo. It likely dated from the 1840’s or 50’s. I never got inside but the second floor showed signs of the original mustard yellow, ox-blood red and forest green historic colour scheme. The lower façade still had classical Georgian elements. It was a piece of our own Upper Canada Village. I have a complete photographic record of the façade as I was, at the time, optimistic that someone might do the right thing and the photos might help. John Edwards

David Lloyd had these memories.

Hope Peden and his wife ran the store till some time in the mid 50’s . As kids we used to take our empty bottles there to cash in for candy. They lived in the back of the store and would meet you at the counter when they heard the bell over the entrance door ring .
They had a border who worked at the Supertest garage at the corner of Bell and Bridge . but his name escapes me. I used to meet Wayne Richards there while he was delivering milk and then get a free ride downtown.
After Hope died and the store closed I remember shovelling snow for Mrs. Peden. She couldn’t afford to pay me , but she let me into the store and gave me a couple of packs of old hockey cards that were still in the display case . I’m sure the store had been closed for a couple of years by then.

Old places have soul. I have always lived in old buildings and thought about those who have lived there before. How can you not? If you have memories of the Peden building please drop me a line.

Before– Bell Street — After– McPherson’s Garage
Jennifer Fenwick Irwin– added this from the Carleton Place and Beckwith Heritage Museum.
Here’s another image of the Peden Store. The museum is looking for more information on James Peden, who operated a photography studio out of the Tayor Block, on the Mill Street entrance, in the 1890s. If anyone can tell us more, we’d love to hear from you.