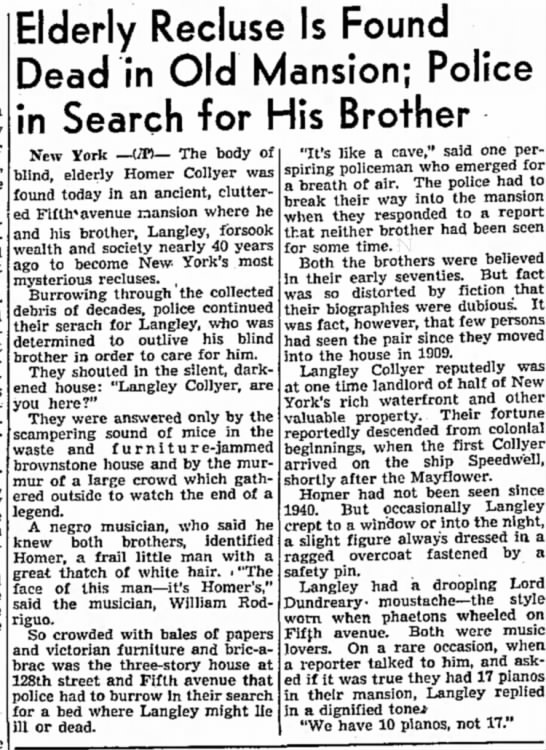 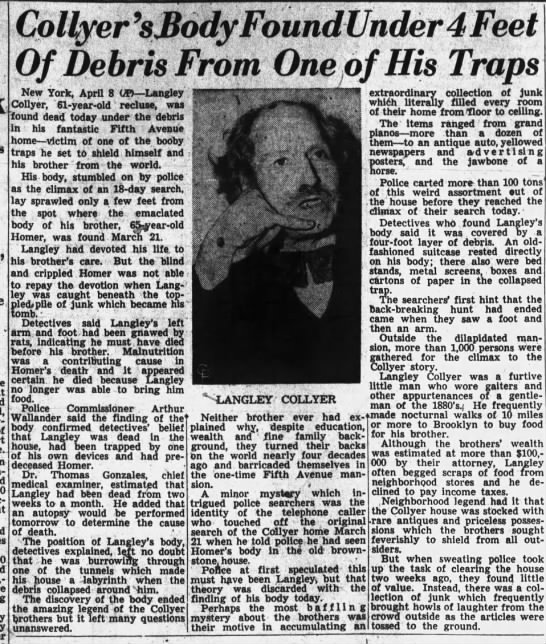 Found amid 120 tons of junk in their Fifth Avenue mansion: The story of the Collyer brothers

Was Your Grandmother a “Saboteur!”? Hoarding Before Television

Photo-Carleton Place and Beckwith Heritage Museum from the old Canadian files where Billy would have gone to purchase his steamer yacht.

Billy Maloney/Moloney was the reading clerk of the Board of Alderman in New York City which granted franchise to the Broadway Surface Railway Co.  He secured the signatures of the requisite number of aldermen to a call for the special meeting of the board August 9 1884 when a fraudulent bill was passed over Mayor Edson’s veto. Billy was finally charged in the stories of Fullgraff and Duffy with the evidence as having acted as a go-between between Jake Sharp and the purchasable aldermen.

In 1885 when it began to get too hot for the boodlers in New York City Maloney/Moloney, Delacy, Dempsey, John Keenan and others fled to Canada. They all remained across the border for 5 years and Maloney/Moloney is said to have spent time in this area. After the acquittal of Thomas B Kerr they all went back to the United States, but charges were somehow all dismissed and I am sure made the exiles quite happy.

The Board of Aldermen in New York City was notoriously corrupt in the 19th century, sometimes earning itself the nickname “Forty Thieves”. The 1884 Board of Aldermen became nicknamed the “boodle board” when it was discovered that several aldermen took bribes so that Jake Sharp could acquire a Broadway railroad franchise at a greatly reduced cost.

“Boodle” is a Dutch word meaning “bribe money” that was popularly used in New York City in the 19th century. The term “boodle board” was most specifically applied to the 1884 board, but was also sometimes used for boards of other years. The Board of Aldermen was replaced by the City Council in 1938.

Carleton Place and Beckwith Heritage Museum–The “Fairy Belle” from a copy of the Carleton Place Herald from Feb. 16 1892. These boat engines were made at the Gillies Machine Shops on Rosamond Street.

Searching for the Red-Headed Wench of Carleton Place

Zillions of years ago on of my quarterly buying trips to New York City my friend Melinda decided I should experience the iconic Limelight Club at least once in my life. Watching me groove along with the band, one of her friends dared me to jump on the stage and tap dance.
One must never ever challenge a Leo with a glass of wine under her belt sporting brand new silver Capezio tap dance shoes. Leo’s always take the challenge no matter what the peril might be. So peril be gone, I crawled up on that stage and started tap dancing along side the band. I had no clue in the world who the death metal band was, and they most certainly were not too impressed with me either. Soon security was coming my way, and the only noise I heard beside the clickety-clacks of my taps was the word “jump” from the front row. The chant grew in numbers as it traveled down the dance floor until it was a deafening roar.
“JUMP!” “JUMP!” “JUMP!” screamed the crowd.
So I did.

I took great care not to leap into a less populated part of the crowd remembering how a friend had broken his arm at a recent Soundgarden concert. Instead, I hurled myself right into the centre of the packed mosh pit crowd where greeting hands caught my body. I was passed down the dance floor like a tsunami and felt like every pair of hands in the city of New York was touching me.  After what seemed an eternity, I ended up at the back of the room with a thud on the floor. My now concerned friends said all they could see were silver tap shoes peeking out and a whole lot of underwear. Deep in my heart I was not worried as I had always remembered the solemn underwear oath my mother had always told me,
“Make sure you have clean underwear on in case you have an accident.”
Thirty minutes later, and another glass of wine down, I was summoned to the VIP area by management. Behind the red velvet cords stood extremely well dressed people. Hookers, pimps, and drug lords all looking very glittery just like my shoes. Apparently a few wanted to meet the girl that rode the human wave–with Granny Panties on.

A large man sporting a dark suit with blondes hanging off of him like scarves motioned me to come forward. He handed me a crisp one hundred dollar bill and told me no one had ever made him laugh so much in his life. He said in a very low voice similar to that of Marlon Brando,
“Take the 100 dollars kid (I was 43) and go to some fancy lingerie store and buy yourself some real underwear.”
Was my underwear that bad? Was it not the norm? Were they only worn by Canadian women wanting to keep their lower extremities warm?  After all, my late mother had always told me that’s what American Bandstand dancers wore. Dick Clark insisted they wear Granny Panties, and who would ever argue with Dick ? No one would!
I snatched the crisp 100 dollar bill out of the man’s hand as I knew I wasn’t performing an encore for anyone.  As I tapped down the stairs I asked myself what was really wrong with Granny Panties. Personally, I’d rather have baggie underwear than a string up my butt!
Author’s note- Sad to say some of this was going to be used on the Carrie Diaries, but I was contacted on Facbook and it fell into my other message box. Always check your other box-lesson learned.
Buy Linda Secaspina’s Books— Flashbacks of Little Miss Flash Cadilac– Tilting the Kilt-Vintage Whispers of Carleton Place and 4 others on Amazon or Amazon Canada or Wisteria at 62 Bridge Street in Carleton Place

The River of Memories and Love – Zoomer.