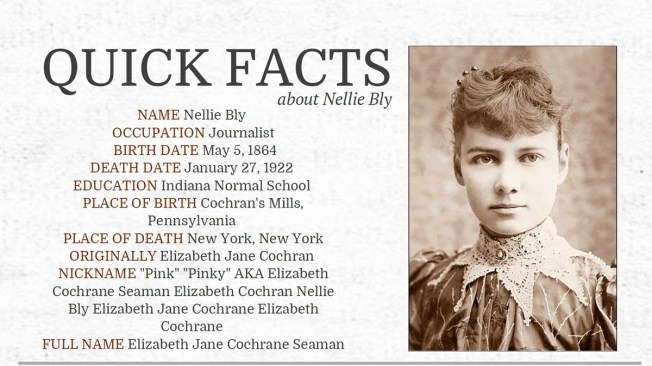 Elizabeth Cochrane Seaman (May 5, 1864 – January 27, 1922), better known by her pen name Nellie Bly, was an American journalist who was widely known for her record-breaking trip around the world in 72 days, in emulation of Jules Verne’s fictional character Phileas Fogg, and an exposé in which she worked undercover to report on a mental institution from within. She was a pioneer in her field, and launched a new kind of investigative journalism. Bly was also a writer, industrialist, inventor, and a charity worker.

As a writer, Bly focused her early work for the Pittsburgh Dispatch on the lives of working women, writing a series of investigative articles on women factory workers. However, the newspaper soon received complaints from factory owners about her writing, and she was reassigned to women’s pages to cover fashion, society, and gardening,

Burdened again with theater and arts reporting, Bly left the Pittsburgh Dispatch in 1887 for New York City. Penniless after four months, she talked her way into the offices of Joseph Pulitzer’s newspaper the New York World, and took an undercover assignment for which she agreed to feign insanity to investigate reports of brutality and neglect at the Women’s Lunatic Asylum on Blackwell’s Island.

Committed to the asylum, Bly experienced the deplorable conditions firsthand. After ten days, the asylum released Bly at The World‘s behest. Her report, later published in book form as Ten Days in a Mad-House, caused a sensation, prompted the asylum to implement reforms, and brought her lasting fame

In 1888 Bly suggested to her editor at the New York World that she take a trip around the world, attempting to turn the fictional Around the World in Eighty Days into fact for the first time. A year later, at 9:40 a.m. on November 14, 1889, and with two days’ notice, she boarded the Augusta Victoria, a steamer of the Hamburg America Line, and began her 40 070 -km journey.

She took with her the dress she was wearing, a sturdy overcoat, several changes of underwear, and a small travel bag carrying her toiletry essentials. She carried most of her money (£200 in English bank notes and gold, as well as some American currency) in a bag tied around her neck.

In 1895, Bly married millionaire industrialist Robert Seaman, who was 40 years her senior, and she became legally known as Elizabeth Jane Cochrane Seaman. Also around this time, she retired from journalism, and by all accounts the couple enjoyed a happy marriage.

Upon her husband’s death in 1904, Bly took the helm of his Iron Clad Manufacturing Co. During her time there, she began manufacturing the first practical 55-gallon steel oil drum, which evolved into the standard one used today. While in charge of the company, Bly put her social reforms into action and Iron Clad employees enjoyed several perks unheard of at the time, including fitness gyms, libraries and healthcare. Ultimately, the costs of these benefits began to mount and drain her inheritance.

Faced with such dwindling finances, Bly consequently reentered the newspaper industry. She began working for the New York Evening Journal in 1920 and reported on numerous events, including the growing women’s suffrage movement.

Just two years after reviving her writing career, on January 27, 1922, Nellie Bly died from pneumonia in New York City. She was 57 years old.