From the moment of his auspicious birth the first day of the last century, Norman Paul has worked and lived out history. It’s clear history has worn him well. Paul’s Scottish Presbyterian great-grandfather, an impoverished but courageous 33-year-old weaver, rafted down the Mississippi River to harvest the bounty of 100 acres of wilderness between Almonte and Carleton Place, where he began a dynasty of his own, fathering ten children.

Generations later his great-grandson still is raking hay in the summer and ploughing the same fields in the fall alongside his own middle-aged son. Paul and his son were the fourth and fifth generations to work the fertile land of Mount Blow. They lived in homes built in the 1840s and 1850s, caring for dairy cattle and hogs in outbuildings that include a barn built in 1897.

The farm Paul took over from his father in 1925 had been the site of many operations besides farming. Paul’s grandfather and father had operated a booming lime business hauling quarried white limestone to a lime-kiln that still exists today.

Account books still kept in Paul’s home, the main part of which was built in 1848, show the finished lime was hauled by wagon or shipped to such communities as Brockville, Merrickville, Carleton Place, Arnprior and Carp where it serves to bind together historic stone buildings to this day. There’s also a prized medal in the same house honouring its recipient for the quality of lime provided for competition in the Colonial and Indian Exhibition in London in 1886.

Paul is blessed with an almost total ability to recall events since his childhood and has always had a close and unique acquaintance with early farming practices in the area. He recalls as a child seeing the lime kiln in action and remembers climbing a steep wooden ladder to oil the galvanized iron wheel powered by wind that pumped the families’ water from the ground. And by simply stepping out his front door as a child to work in the barn he recalls touching and sometimes working with equipment as rudimentary as flails, scythes and winnowers wooden instruments used to separate grain Paul has whittled a series of mounted miniature displays that faithfully and painstakingly demonstrate everything from potash and lime making to a pioneer method of barn construction and the windmill powered pump of his childhood.

Products of thousands of hours of labor, the works also include a much-travelled rendition of Mount Blow’s farmyard filled with figures representing Paul’s ancestors and another demonstrating the old art of producing maple syrup. Paul says he originally made the exhibits, mostly from memory, for display at gatherings of his contemporaries.
However, as word of his works spread, many of the several hundred displays and innovative lectures he has given have been moved into school libraries. “I’ll tell you there is nothing more satisfying then talking to these kids with their eager faces,” Paul says. “They are really interested in learning and that’s wonderful for me.” “They used to want me to go into the classrooms, but now I tell them to send them all into the library and pack them in there on the floor at my feet. Ill keep their attention.” Paul says he has never regretted leaving school at sixteen, though he genuinely intended to return. “My life has been hard work and it has been good. “If I had it all to live over again I’d live it exactly the same in exactly the same era. It has been a good century, good times to be alive.” 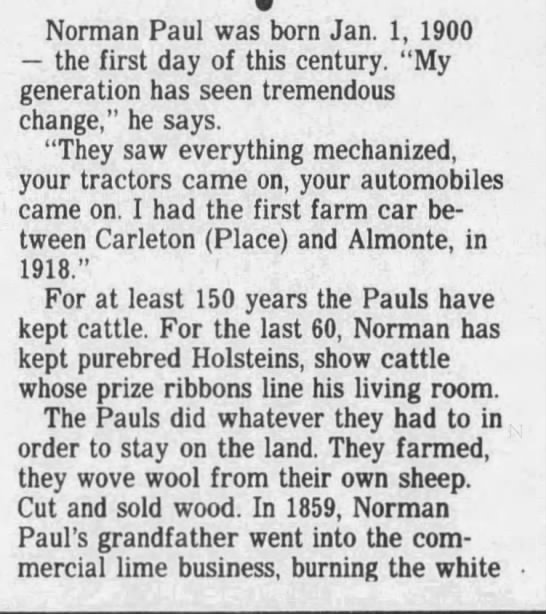 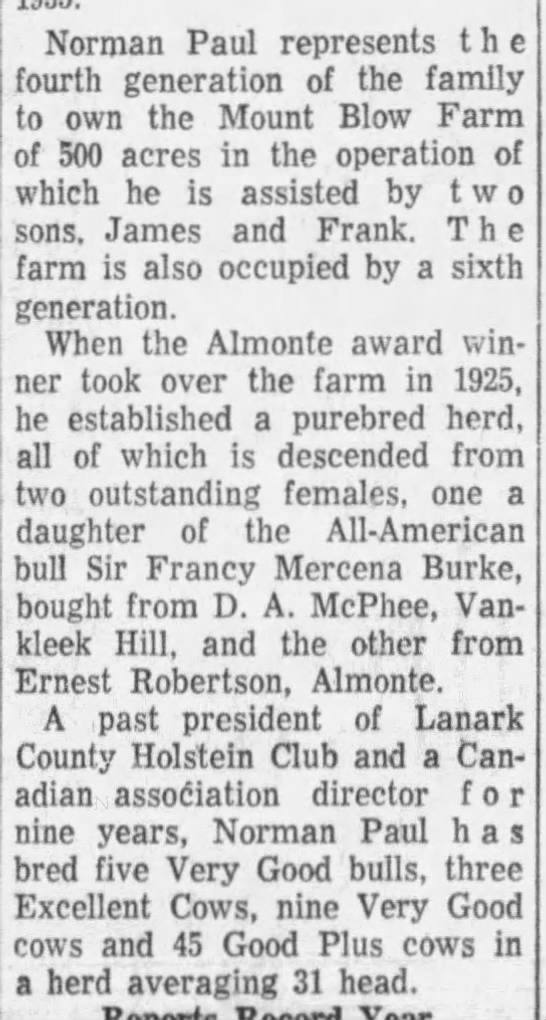 Sylvia McMillan Brown Norman Paul graciously spent time with my class at Caldwell in the mid 80s explaining pioneer life in Lanark County using his miniature carvings. Wayne Rostad heard about the upcoming talk and asked if he could film it for his TV show, On the Road Again. What an exciting day that was for my students and me!