With the transfer within a short time of the Mississippi Iron Works, Limited, from Almonte to Hull, says. Ottawa’s neighboring city will have a new industry which will employ from the start about 60 men and expects to have 100 to 150 men when-fully in operation. The change from Almonte ‘to Hull was made possible through the efforts of a group of Hull city officials and businessmen.

The Mississippi Iron Works was established in Almonte in 1875 and since then has manufactured agricultural machinery, chiefly tanning mills; plows and grain and seed separators of various kinds. A site on Montcalm street near the Hull West station has been obtained. On it stands a solid brick two storey building ,around which is room for expansion. A new company to operate the iron works will be organized within 10 days and manufacturing will be started soon after.

When a flood last spring carried away part of the factory wall of the Almonte plant, operations were suspended. The company received attractive offers to locate in other cities, but Hull had greater inducements than any other.

April 11, 1928– The high waters of the Mississippi river did several thousand dollars damage when the wall of the Mississippi Iron Works, next the river, was half swept away by the rushing waters from the upper level of the river above the CPR bridge. The crash was heard throughout the centre of the town and when the damage was investigated it was seen that a great deal of machinery, tools and lumber had been carried off as well.

The next day the side was gone and there was a great gap cut into the centre of the plant with parts of three floors gone or badly sagged. The flume of the Almonte Knitting Company was also so badly damaged by high water that they were forced to close down, and in order to resume work they had to connect up with the municipal power plant as the damage could not be repaired till the waters subside.

Andrew Young was in partnership with John Flett who operated The AE Young and John Flett Machinists and Iron Founders on Lot 18 Coleman’s Island. The partnership dissolved in 1871 and Andrew and his brother Robert set up their iron works operations on Water St. In 1882, the brothers bought part of Lot 19 Mill St Almonte and erected the Mississippi Iron Works there. The brothers then bought the Otter Glen Woolen Mills in 1885.– People of Carleton Place — John Flett

G.C. Stackhouse a dentist ran the store as a book, stationary, and variety store.
Then the store was under the ownership of John Flett (1836-1900) who operated it as a bookstore in 1880.

It has had numerous businesses in its premises. In 1871 James M. Scott ran a
stationary shop (Lovell’s Dominion Directory). In 1876 a dentist G.C. Stackhouse
was located in the building (Woodburn’s Central Canada Directory). Mr. Stackhouse
seems also to have been in the jewellery trade since the Carleton Place Herald of
1878 contains an advertisement announcing his withdrawal from the trade. The
Herald announced that on March 3 rd of 1880 that Mr. John Flett was buying out Mr.
Stackhouse.

John Flett was married in 1862 to Margaret Rutherford of Smiths Falls. Flett worked as a machinist there and in Almonte at the Mississippi Iron Works, Little Bridge Street until it was taken over by the Young Brothers. 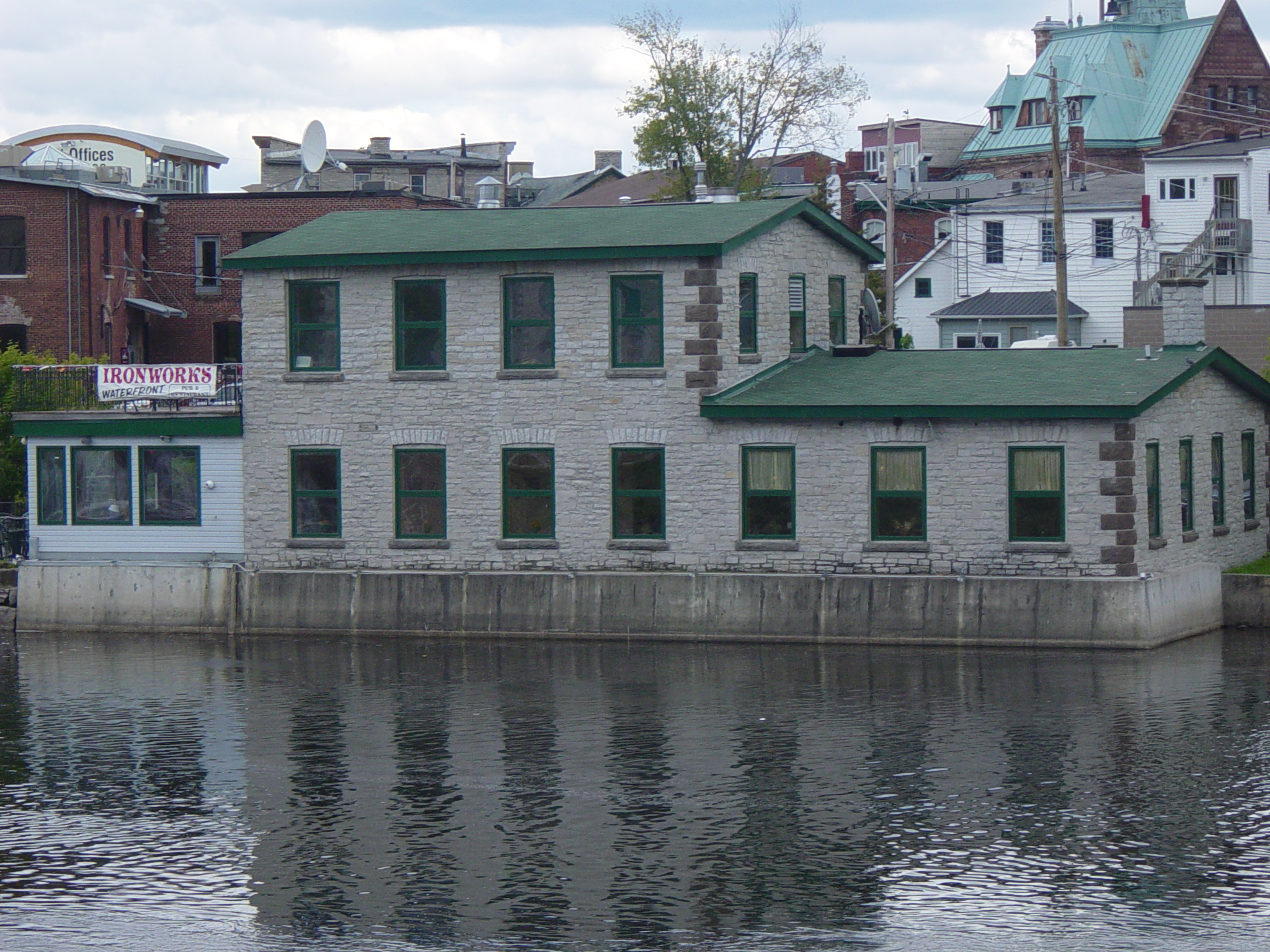 Andrew Young was in partnership with John Flett who operated The AE Young and John Flett Machinists and Iron Founders on Lot 18 Coleman’s Island. The partnership dissolved in 1871 and Andrew and his brother Robert set up their iron works operations on Water St. 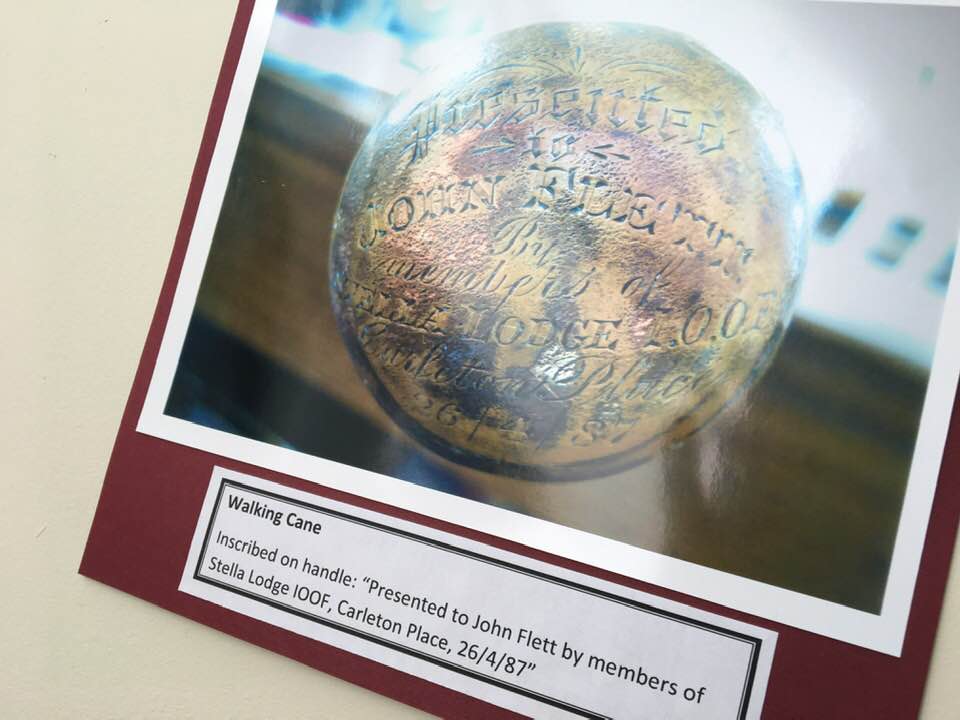 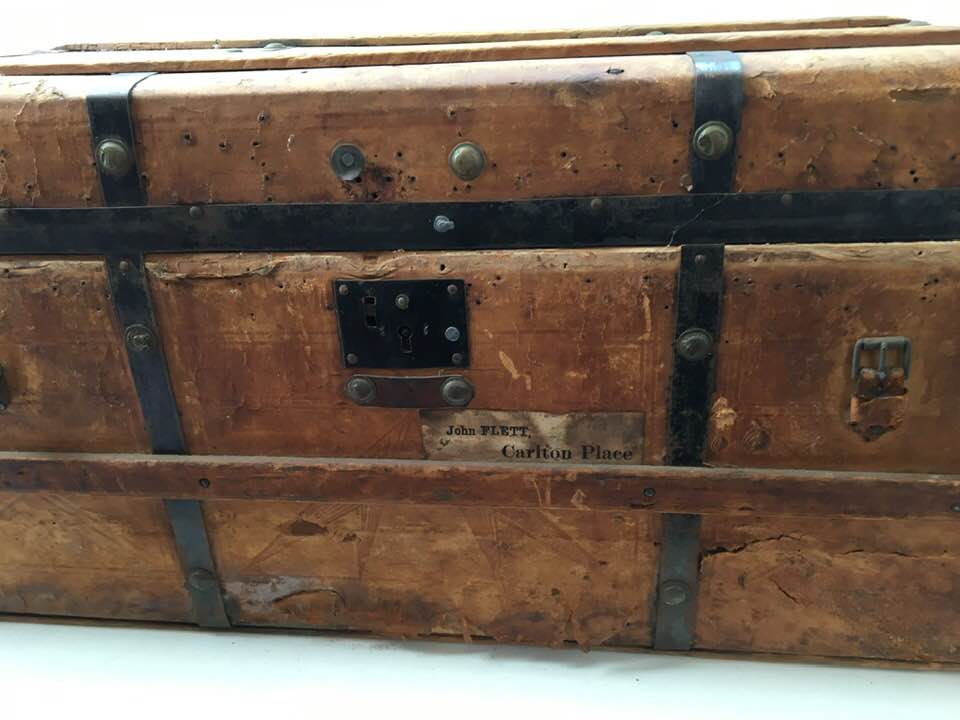 WWI pilot Roy Brown poses for a snapshot with his mother Mary Flett Brown while home on leave for Christmas 1917. They are standing near the intersection of Judson and Mill Streets. The McArthur Mill (later Bates and Innes) is in the distance to the left, the large frame building to the right is no longer there. Photo and Text-Carleton Place and Beckwith Heritage Museum

Brown-Flett—Married, on the 8th inst., at the residence of the bride’s parents, by Rev. A. A. Scott, M.A., Mr. J. M. Brown to Miss Mary E. Flett, only daughter of Mr. John Flett all of Carleton Place.

“Mental Photographs – Album for confessions of Tastes, Habits and Convictions” with entries from 1882 – 1885. Belonged to Mary Flett, aged 19, who later became the mother of A. Roy Brown and wife of Mort Brown, flour mill owner. Photo and Text-Carleton Place and Beckwith Heritage Museum

The Curious World of Bill Bagg — The Gillies Blacksmith Shop