Thanks to Joan Halpenny for sending this!!!

The Family of Joan Halpenny– McRostie

It’s Photo Friday! Today’s photo shows John and Milton Dezell at their Supertest service station sometime in the 1920s. This station was located on Bridge Street, at the corner of Bell. The accompanying sketch of the site is from a 1926 fire insurance map and clearly shows the overhang and supports. The pink (brick construction) building to its right was the McRostie Grocery store. Next to it, is 205 Bridge Street, commonly known as “the doctor’s house”.

Hi Linda, hope these are the kind of pictures you are looking for?

These are from my grandparents and father. I’m guessing late 1800s and early 1900 s. I have lots  but unfortunately very few have names or dates. The people in the photos would all be dead now but perhaps relatives might recognize them.
Joan Halpenny

I checked the newspaper archives and found the event that this picture was taken at and added it to the photo–August 11, 1898

Have attached another photo. My aunt, Peggy McRostie is sitting in the front and my uncle, Frank Ward is standing at the back left side. If I have the story right, they met while performing in this play. 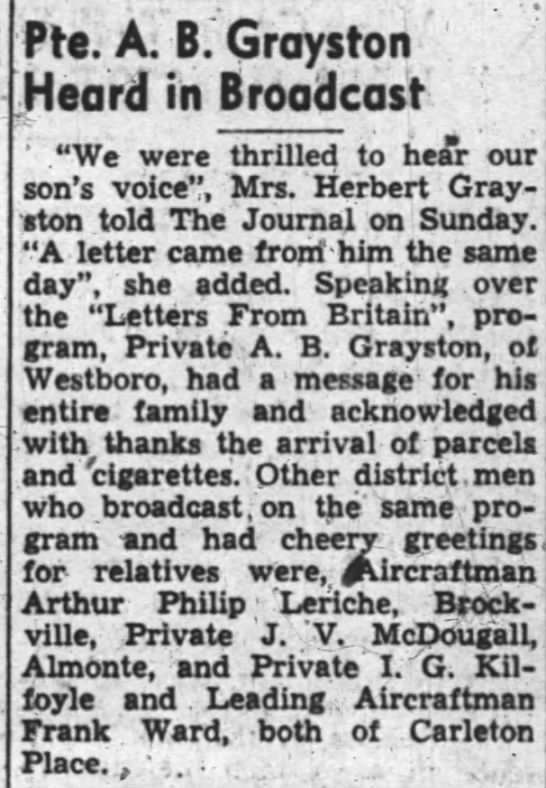 The first one is Peter McRosties family….he’s the one who lived in the stone house…hard to believe they could fit in so many children. My grandfather Fred, back row on the right. I noticed the newspaper article about Emma the librarian. She is third at the back on the right.

The third one,of the group of women , I have no idea about. My grandmother. Eliza ( Beggs ) McRostie is wearing the black dress,sitting in front. 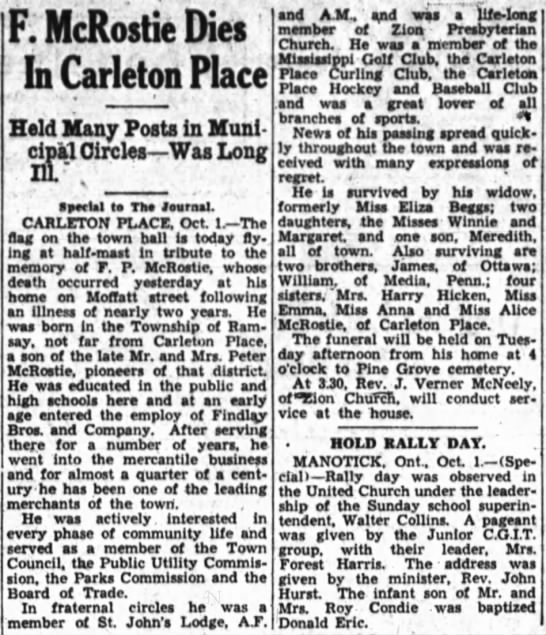 Donna Mcfarlane— also this one of John McRostie

The next one is a calendar from my grandfathers store, although he had died by then and my father had taken it over.

I never really thought much about the little stone house that sits quietly on the end of Flora Street in Carleton Place. It wasn’t until I was doing some research about the old floating bridge that spanned the Mississippi River to the old Hawthorne Mill that I wanted to know more.

The little home that grew into a farm was built in 1840 by John McRostie. The land was first cleared by Thomas Burns, but what few know is that the grounds you see are probably the approximate upper limit of the long rapids which once existed. It has always been known among historians as the place where the Ramsay Settlers of 1821 had their last overnight camping spot before they traveled by water from north Lanark to Almonte. Locals now know it as Centennial Park. As time went on, the McRostie’s prospered and moved into more elaborate homes.

Thomas Burns held the first crown grand of 80 acres in 1828, but Robert Johnston was shown as the owner in 1829. John McRostie bought the property in 1840, built the house and it remained in the family until 1919. It was then sold to Alec McClean who actually flipped it to Daniel Sullivan. In 1923 Albert Powell took possession with the acreage at this point being drastically reduced and it was bought by Howard Dack.

There is the old McRostie home on Flora Street-Shane Wm Edwards— The house in the background shows a front door with a stone surround but I seem to recall hearing that it may have added later and there are at least two other similar stone surrounds on the front door of houses in town. At one time it seems that decorative embellishments like this were sold by door to door salesmen.

The stone home didn’t come back into its own until Howard Dack bought it and proceeded to restore and renovate it. When Dack bought the house from Albert Powell in 1946 the stonework had to be completely redone including the stone trim of the front door. Old wooden shutters were attached to the windows, and the sun porch facing the river was an addition. The large fireplace that sits in the living room came from the old Captain Glendinning home on Glen Isle.

The original pine floors still exist on the top floor, but all had to be replaced on the first level. Like most older homes, the enormous cedar beams in the basement are as solid as they first day they were installed. Seeing the house today, you have to stand there and remember a time gone by when it was a farm and Centennial Park was abuzz with livestock and then Ab Nichols lumber yard.

The Glenndining  home is said to be the oldest stone house in Beckwith, this home is located on Glen Isle. It was built c. 1820 by Captain Thomas Glendinning, the man who helped incite the Ballygiblin Riots of 1824.

Glendinning, a native of England, served in the British army as a Lieutenant before retiring on half pay in Beckwith Township. According to legend, Glendinning escaped the Irish Settlers on day two of the Riots by hiding in a large chimney recess above the fireplace in this house. Unable to find him, the Irish carried on to the Morris Tavern in Carleton Place, where they broke in and damaged the now vacated tavern.