Lanark County’s 1975-78 Dairy Princess 20-year-old Anne McRae of RR 2 Carleton Place is competing in the semi-finals of the Ontario Dairy Princess Competition at the Canadian National Exhibition (CNE) in Toronto. She is one of 10 contestants who will competes for five positions in the finals that will be held Friday. Forty county dairy princesses were judged in preliminary events at the CNE Aug 28 -through Aug 31. Miss McRae is the daughter of Audrey and Donald M McRae and she teaches swimming for the Ottawa Municipal Swim dub at the Lowertown and Brewer Pools in Ottawa.

She is bilingual speaking English and French and her interests include all sports particularly synchronised swimming horticulture psychology and camping. She is also a member of the Royal Life Saving Society. Her sister Heather said that she’s “very excited she worked hard”. Four other area dairy princesses competed in the contest They were: Diane Jarrell of RR 8 Belleville representing Hastings County Dianne Kelsey of RR 2 Lyndhurst representing Leeds Kathy Michels of RR 4 Wolfe Island representing Frontenac and Val Hart of RR 6 Napanee representing Lennox and Addington.

Four preliminary competitions were held at the CNE and two winners were chosen from each. The two highest point scorers from the remaining 32 contestants were also chosen to go on to the semi-finals. Each of the entrants was scored from a total of 100 points. They received 65 per cent of their mark for their personal interviews during which they were judged on personality knowledge of the dairy industry personal interests and poise and enthusiasm. The remaining 35 per cent of their point total was awarded for public speaking ability judged on content and the demeanor of the competitor. Three judges with a knowledge of the dairy industry evaluate the contestants during each stage of the competitions. This year’s judges include Peggy Knapp who operates a dairy form and is married to a milk commissioner Bob Carbert curator of the Ontario Agricultural Museum in Milton and Jack Higgins of Kemptville an employee of Penwall Industries a sanitizing and chemical company allied with the dairy industry.

The young woman the judges choose as Ontario’s Dairy Princess will become a full-time employee of the Ontario Milk Marketing Board tor one year. In this capacity she will travel extensively in Ontario the United States and Great Britain and she will act as ambassador for the province’s dairy industry.

So where is Anne Now?

Running for Perth Council this election (2022)

Hi Linda, just thought I would share these photos of my Dad and. Family. The one of the wagon has x is my Dad in 1936  is the one on the right in wagon. My Dad’s name was David.

In this picture my Dad is the one on the left at the back. My daddy is the one on the right with the blonde hair and my Papa’s sister is my Great Auntie Pearl McRae who married a Echlin. The other is my Dad’s family the older couple in front are my great grandparents the Bennetts, my grandma McRae’s parents. I actually got to meet them they were in their hundreds.. —Rhonda McRae Landriault

Echlin Genealogy Book – Over the Rocks of Bathurst

The 12 Hardships of Mr. McRae

Down at the Farm –9th line Beckwith. McRae Family Photos

Where Have All the Flowers Gone? Benson McRae

The McRae family bought a Reed carriage on layaway. It cost $60.00 and was bought on layaway at Friemans’ on Rideau Street in Ottawa. It had to be a top of the line carriage bought for many children to come.

You must have been a Beautiful Baby–Lanark County Family Names

Ben MacRae This house was and still is just west of Doug and Marj Campbell’s farmhouse. My family moved to the Cemetery Sideroad before I was born.

Margaret Partridge Hi folks, Margaret Partridge here. I grew up at this house-it is on John and Karen’s farm. It is a frame house. After our Dad passed away, we got permission to visit the house. It was very memorable, the best possible time of my life was spent here. Mary was born n 1956 and was quite young when we moved to Cemetery Side Road. The lane way was across the road from the Aiken House.

Come and visit the Lanark County Genealogical Society Facebook page– what’s there? Cool old photos–and lots of things interesting to read. Also check out The Tales of Carleton Place. Tales of Almonte and Arnprior Then and Now.

Where Have All the Flowers Gone? Benson McRae

More on Those “Glads” of Carleton Place

The Mystery of the W.G. Hill Store Continues….

What Did it Cost to Stay in the Hospital?

Jeff Brennan sent this to add to the mystery of the McRae family’s “W. G. Hill Store”.. Some say it is and some say it isn’t and Jeff’s Grandmother is 93 and does not remember it. This page is from the archives of the Ontario Womans Institute. We continue to search…

Found the Location of the W.R. Hill General Store

Lila Leach James was the first to mention this, and the more I looked at it I realized  the former W.R. Hill General Store was now Braeside Furnishings. The McRae family member said it was in the Arnprior area and she was right. I cannot find a thing about W. R. Hill but you can see the original windows boarded up and the longer building was definitely renovated and cut down when you look at the parking lot.

You can see the placement of two windows and a door of the original building and a peaked roof was added to it on the longer section. Thanks Lila for all your help.

Thanks to all that thought it was the Hill General store in McDonald’s Corners. Definitely not– but a heck of a good guess.

Item consists of an image of a damaged car sitting in Dulmage’s garage after a car accident in Carleton Place-City of Ottawa Archives.- June 27 1954 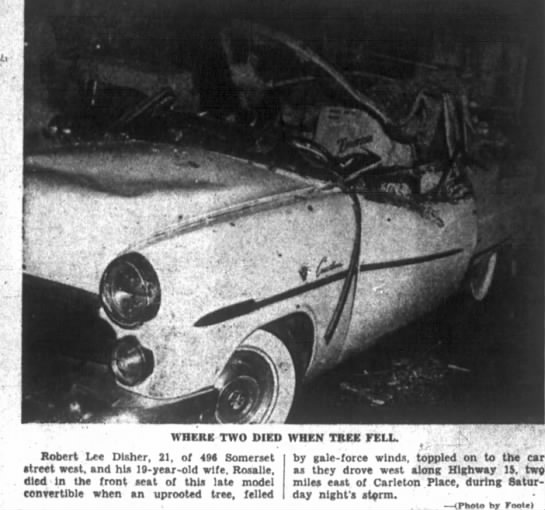