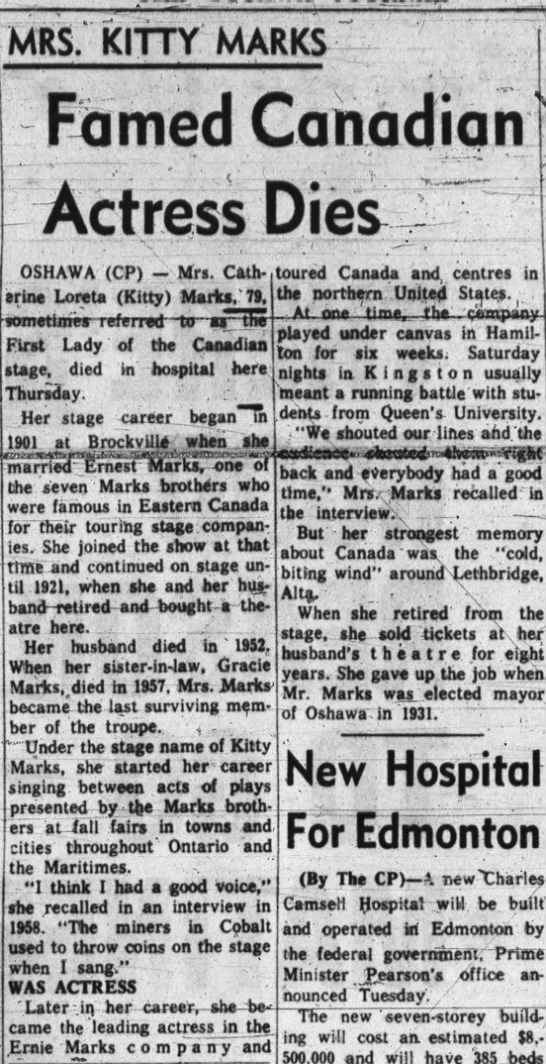 Doris Blackburn/ Karen Blackburn Chenier gave me this beaded belt from the 1920s. What is the story behind it?

This very unusual beaded sash belonged to Vaudevillian Joe Mark’s wife Gracie. They were part of the illustrious Marks Brothers. From Perth, Ontario they toured North America from the 1870s into the 1920s.

As the Marks Brothers had grown up near Christie Lake they often returned there for a summer vacation. The rest of the year was spent travelling or performing in New York City. Read all about the Marks Bros. here..  CLICK

One day when Sophia accompanied Arden on his mail route, Gracie happened to meet them at their mail box. After a short chat she offered Sophia this belt to keep as a souvenir of their appreciation of Arden’s mail service to the Mark’s family.

Sophia was my Grandma Blackburn, *Arden’s wife who used to do the mail route every day with him. There is a book about my Grandpa Blackburn and his mail route stories His route ran from the Perth post office to Christie Lake and back. He delivered mail, groceries and even people. Quite the characters I met including a “hermit” named Dickie Peters who never came out of his little shack except to wave to Grandpa. As I often say to people “I can’t make this shit up.”  Karen Blackburn Chenier

Theirs was a bond born in nature. United by water, the early inhabitants at Christie Lake were drawn into a community that came to transcend politics, religion and sometimes even family. Over time they gathered to work, to play and to celebrate the beauty that was around them. Located approximately 15 kilometres southwest of Perth, Ontario, Christie Lake is the third largest lake in what is known as the Tay Watershed. Follow the community’s mailman as he uses the North Shore Road to weave a thread that brings together this unlikely blend of permanent residents and summer vacationers

A staged promo shot for the Marks’s production of Bringing Up Father, with Tom as Jiggs and Gracie as Martha. 1920s

And So They Danced in

The Story of Ms. Kitty Marks

Perth Remembered—The Inn was the original family farm house. It was renovated into a hotel by Tom Marks after retirement, and named after his daughter Arlie. Their official summer residence was the Red Cedar Villa at Christie Lake. Family members probably stayed at the farm house as well.

Christie’s Lake:  Well, Mr. Editor, with your permission I will enter my sanctum and give you a rough account of what is going on at the lake.  R.W. and Joe Marks, May A. Bell,  Mrs. R. W. Marks and Master Georgie of Marks’ Brothers Co., #2, are enjoying a three month vacation at the lake.  They are reorganizing their company in September, either at Perth or Ogdensburg, N.Y. and will tour the western states next season, playing the large towns and cities.

Rev. Father O’Brien’s picnic at Elliott on Saturday was well patronized.  They report a good time.  His Reverence must have ordered the day as it was nice.  Mack, Ernie and Joe Marks took in the picnic at Joe Davis’ grove, Oso, given by Rev. Mr. Smith (Anglican), Sharbot Lake. Ho, for a bicycle!! What can compare to a bicycle rum from Perth to Christie’s Lake on a fine day and then cool off with a stroll over the green hills or a stretch under a nice, shady tree; or better still, a pull on the lake.  But oh! What an appetite!

Won’t you relish one of Mrs. Anderson’s wholesome dinners.  Mr. and Mrs. R.W. Marks are enjoying their beautiful cottage, Red Cedar Villa and will give an “at home” in the near future.  Ed Williamson, the genial clerk of the Hicks House and Mrs. Ed Williamson and family have rented Nicholas Andison’s beautiful little cottage on Fern Cliff and are enjoying a two week outing.

Perth Remembered–ARLIEDALE INN, CHRISTIE LAKE–This building was the original family farm house of the famous Marks Brothers of Christie Lake. When one of the brothers, Tom retired from the theatre he returned to Christie Lake and renovated the farm house into a hotel and named it Arliedale Inn, after his daughter Arlie.

The sailing canoe “Marvel” purchased by Joe Marks at Peterboro is a beauty and skims over the lake like a swan.  Messrs. Drummond and Farrell of Perth, called at the upper end of the lake on Sunday.

The Christie’s Lake House is in for a big run this season.  Numerous applications have come in for room and board.   Mr. Anderson, owing to an increase in patronage, is obliged to erect another building with six spacious sleeping apartments.  On the top of this building there will be a deck or look out with a rail on which hammocks will be swung and easy chairs for the comfort of the guests.

Mrs. S. Hart and family, Toronto, have applied for rooms again this season.  Mrs. Mendels, Perth, with friends from Montreal, will be among the guests.  H.M. Shaw, merchant, Perth, has arranged for a party of ten and numerous others are looking for accommodations.  The parties who broke into Mrs. Drummond’s cottage, Ruby Island, and helped themselves to working utensils, etc., should have been thoughtful enough to return them to the cottage and not leave them lying around the island.  Mrs. Drummond would be very much obliged if they would return the hatchet.

Fred Hicks will be a patron of the lake this summer. We hear that Fred is going to build a cottage on his island.  Several of the young ladies drove to the Christie’s Lake House Saturday evening after Father O’Brien’s picnic and enjoyed a nice social hop in Anderson’s dancing hall.

Joe Marks has selected a building lot on the little bay opposite Red Cedar Villa, commanding a splendid view of the lake.  Joe calls I the “Bachelor’s Retreat” and will be erecting a cottage on it shortly.  Fishing is good on the lake at present.

John R. Patterson joined the great majority on Friday, June 9 after a year’s sickness.  The funeral was held here on Sunday, June 11.  His remains were interred in White’s Church cemetery.  Mr. Dickson, Sharbot Lake, performed the last rites.  Well, Mr. Editor, as soon as the corn gets advanced enough to attract the coons we will write you to come out to join us in a good old time coon hunt.  At present we are obliged to forgo the luxury.  June 19, 1899 Rusticus.

The early history of Christies Lake is lost to posterity.  “The Killarney of Canada” was the name given to it by the late Thomas Marks, the little bit of heaven set in the heart of Lanark County.  It is situated 12 miles southwest of Perth in S. Sherbrooke.  If there is a “Christie” who settled there and perpetrated his name in this lake no information is obtainable.  The earlier known settlers in the area were the Thomas Marks family and theWilliam H. Patterson family.

Thomas Marks was the father of the seven Marks Brothers who became known from one end of America to the other in the theatrical world.  Robert Marks, the eldest brother, was the founder and manager of their enterprise which varied from solo tours and duos, trios and troupe entertainment all of which was in great demand by theatrical managers during the great era of vaudeville.  One of the most outstanding landmarks on the shores of the lake is the old Marks homestead which is still in fairly good shape and as one ambles through the rooms one can visualize the Marks brothers practicing for a winter tour.  This homestead is a great tribute to Canada’s greatest contribution to the vaudeville stage and the Marks brothers.