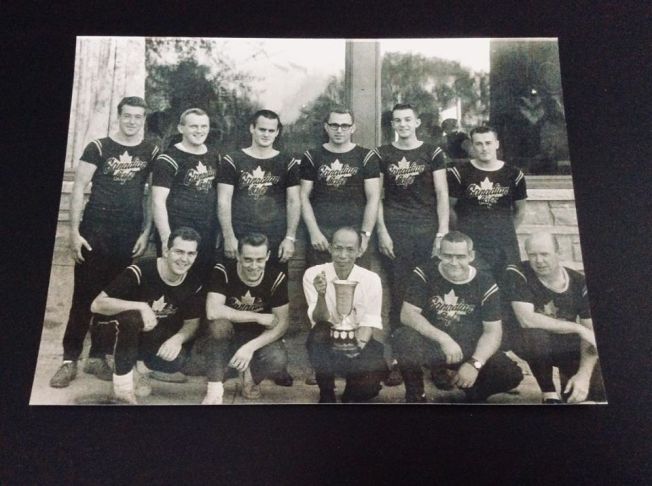 Canadian Cafe ball team circa 1967
Front row left to right:
Gary “Hopper” Houston
Bill “Sowie” Southwell
Eddie Low – sponsor
Warren “Humpy” Horton
Nev Wilson
Back Row left to right:
Gary Waddell
Clarence Timmons
Paul “Crow” Leishman
Carl Welk
Bill “Jonsey” Jones
Ricky Waddell
Submitted by Gary Houston and Anne Houston
Heather Brown Fortington I loved Eddie from The Canadian Cafe. He always had a almond cookie for me when we were there xo
Peter Low Thank you, Heather. As you were obviously a toddler at the time, Dad would have carried you into the kitchen to give you a cookie. Unfortunately, I wasn’t anywhere as successful with the little ones who came in with their folks. They’d cry, scream!! 😟
Anne Hourigan Took 6 dozen of his egg rolls back to Vancouver
Gwen Oneill Best Chinese food in the valley. Eddie was lots of fun especially when he would get ths crowd after hotel closed. It got very busy and the food kept coming
Allan Stanley OMG Eddie… and one of my teachers Carl Welk. In the late 50’s before they renovated the restaurant I used to go in and sit on one of the bar stools and arm wrestle Eddie. Does anyone remember McMullens store down the street?
Brenda Voyce The Canadian Cafe, was a favorite of all of us to go..Eddie’s food could not be replaced.. He spoiled us.. It sure was a sad day seeing the Lowes leave Almonte and , and our favorite restaurant behind..

Ted Hurdis My dad would drive over to Almonte and bring the order home ! Their food was the best Chinese food around.  my grandfather Tom Blakeley use to sell fish to your dad years ago . Hahaha
Peter Low Ted Hurdis As did Murray Guthrie. Our family loved fish, and Dad would go fishing as well (with what little time he had available).
Ted Hurdis This was my wife’s go to place . I went with her one time after the hotel closed she ordered 2 dozen egg rolls ? Hahaha I wondered what I was getting myself in to. Not the best place for a Carleton Place lad to go late at night trouble was never too far away.
Karen Hirst First of all, Eddie Low and his family were a very hard working family—everyone pitched in and had their role, all were well respected contributors and members of our community throughout the years. Best Chinese Food around—our family enjoyed take out orders over many, many years. Peter Low maintains contact with and has a great interest in Almonte despite living in Toronto were the remaining members of his family live. I went to school with Phillip and Lea Ann .
Pete Brunelle My grandfather’s 50th year of service for the fire department was at the cafe also after every meeting when the fire hall was across from the cafe they use to go there afterwards. My grandparents lived just a few
Peter Low I remember your grandfather, Pete. He would give me a ride in the firetruck back in the day.
Jan McNeill Hi Peter Low and Pete Brunelle….do either of you remember Slip Washburn who was the Fire Chief for a number of years? I believe he owned the building behind the restaurant or close to the restaurant. He was my uncle and I remember going to the restaurant with him when I visited Almonte😊
Pete Brunelle yes I do Slip was a good friend of my grandfather , I am sure it was him that use to play cards with my grandfather and chat at my grandfather’s garage when I was young
Peter Low Jan McNeill Hello Jan….and yes I do indeed know Slip Washburn. He was an important part of the team (hired by Mervyn Munro) during our restaurant renovation back in 1967…. as he installed the water, air ventilation and gas connections. I believe he learned his trade on his own – a truly gifted man whose workshop was behind our restaurant. During his afternoon breaks, I remember him coming in through the kitchen door and getting a bottle of Pepsi from the cooler, putting the money on the table by the coffee stove – and having a chit chat with my dad. It was almost like clockwork you could set time by! If ever there was a problem with air conditioning, water, gas system….Slip was Dad’s go-to guy! We were lucky to have known a remarkable man like your uncle. You should be proud!
Brenda Marshall My mom babysat Lisa and Lori and they were like our own family. We were devastated when they moved to Toronto! Yes best Chinese food ever!!! Beautiful family!!
Peter Low Thank you, Brenda. We were truly blessed to have your mom back then. She not only looked after my young sisters….but wow, can she cook! She introduced my mom to putting hot milk in mashed potatoes….something she wasn’t aware was possible.
Linda Nilson-Rogers The kitchen always had a light on…you could beg Eddie to make food even after hours!
Peter Low Mom worked 12 hours, Dad worked 18 hours, 7 days/week. Totally insane hours beyond imagination. But they had to do it
Cathy Paterson Best Chinese food ever ! Lived at the other end of the Street my brother Mike worked there Doreen Horton !
Eddy and Mrs Low were always so friendly
Glenna Kells Hey Peter Low
Weren’t we just reminiscing 😂😂😂
I remember when the egg rolls were two for 25 cents😂😂. When we got money as kids, my brothers Peter and Greg would go to Aikenheads bakery across the street for their sinfully delicious cinnamon buns, warren and I always went to the kitchen door off water street (no idea why we didn’t go to the front ???) and get two egg rolls each …. I was little and could only go if Warren looked after me…
it was an adventure for me- a pain in side for warren… what young lad wants to look after his baby sister 😂😂😂😂

GROWING UP AT THE CANADIAN CAFE

“But he didn’t change the name, so a lot of people, they think about it as a coffee shop.” – Mary Zhao, Almonte, ON CLICK

What Was the David Harum Ice Cream Sundae Sold in Lanark County? 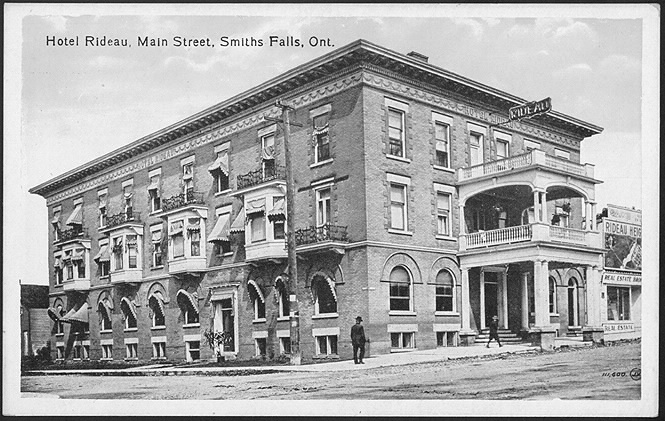 “Some one robbed the clothes lines at the- Hotel Rideau, Smith’s Falls. Staff has been organized to search for it”.

Say what? Search for a rope? So indoing more research on the Smiths Falls clothesline incident I came across this site.

It is truly an amazing site of mind blowing photographs- I tried to contact the author Jim Lowe but the email link was not working. I was gobsmacked at the photos. PLEASE GO TO HIS SITE AND SEE THE WONDERFUL ROAD TRIP PHOTOS.

“The LOW family has always been an adventurous sort.  While in 2008 a trip from Ottawa to Buffalo could easily be done in a day, a century ago, this was a true adventure.  James Low, then age 47, along with his three oldest sons, John Edward Low 19, James Low Jr 18 and William Wilson Low 15 travelled from Ottawa to Niagara Falls and Buffalo by car, steamer, and train”. 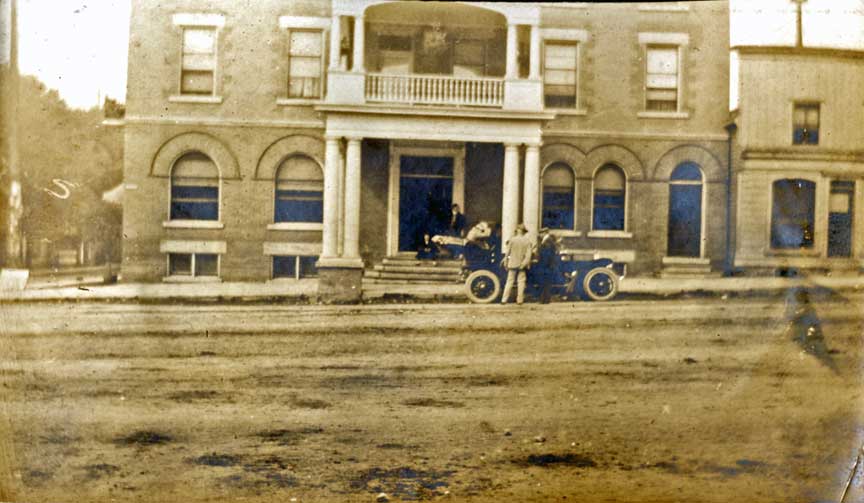 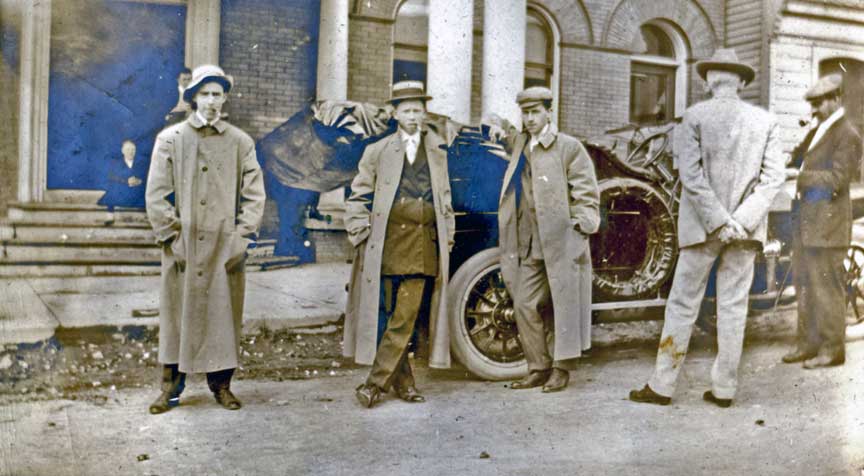 Standing in front of the Smiths Falls, Hotel Rideau–Photo from The King’s Highway.

Sam of the Russell Hotel in Smiths Falls

The Rideau Hotel, built by Charles O’Reilly in 1901, as photographed circa 1910 with an automobile taxi, horse drawn and horseless hotel busses out front preparing to drive to the CPR station to pick up travellers. This photo is taken from the publication, Smiths Falls A Social History of the Men and Women in a Rideau Canal Community, 1794 -1994, by Glenn J. Lockwood.