Lorraine Lemay was born in Aylwin, Quebec, in historic Gatineau county. As a young lady, Lorraine and her husband purchased the Kazabazua Hotel. Some years later, deteriorating health convinced her husband to sell the popular watering hole and, after his death, Lorraine moved to Kemptville.

Over a period of almost thirty years, Lorraine owned and managed the Kemptville Hotel and the Mississippi Hotel in Carleton Place, where country music was the featured attraction. Both enterprises had their start-up headaches. In Kemptville, the town was “dry” and, to change this status, a municipal plebiscite was required. Lorraine was a leader in the campaign to bring Kemptville into the 20th century. Her efforts were rewarded with the “yes” vote that enabled her to begin operating the hotel as an entertainment centre. In Carleton Place, after two years of renovations, the Mississippi Hotel was reopened.

By this time, Lorraine had a well-earned reputation for providing local artists with a stage on which to showcase their talents. Ron McMunn, Ralph Carlson, Tom Wilson, Freddy Dixon and many, many more entertainers played Lorraine’s establishments. She was more than an employer. She was a banker and a confidante to many who needed help. She was also instrumental in starting and promoting the career of Stompin’ Tom Connors, and Tom recognized her in his signature song, “Mufferaw Joe” as “the little gal in Kemptville town”. Lorraine remembers American dobro player, “Uncle” Josh Graves, and a young group, all with green hair, as some of her more memorable entertainers.

After almost fifty years of promoting Valley talent, Lorraine was still a business woman and the proprietor of Lolly’s Tea Room in her adopted town of Carleton Place until she passed away in 2002. Ottawa Valley Country Music Hall of Fame

Mrs. McIlquham, wife of the genial proprietor of the Mississippi Hotel, met with a most painful accident a number of days ago.  While taking out carpet tacks with a knife, one of the sharp little things flew bottom first directly into the ball of her eye, lodging so deeply that it had to be pulled out by her finger.  The pain was most excruciating and it was many days  before even the slightest relief could be felt. The doctor has been keeping her in a dark room and administering poultices but it was difficult under the existing conditions to apply them.  He is hopeful that her eyesight will be completely restored.

The biggest sale Howard McNeely ever held was when he sold the Mississippi Hotel by public auction.  All the furnishings went too, and then the big stone heritage building was put on the block.  Howard lives by the adage that discretion is the better part of valour, and insists he cannot honestly remember what the landmark building sold for. 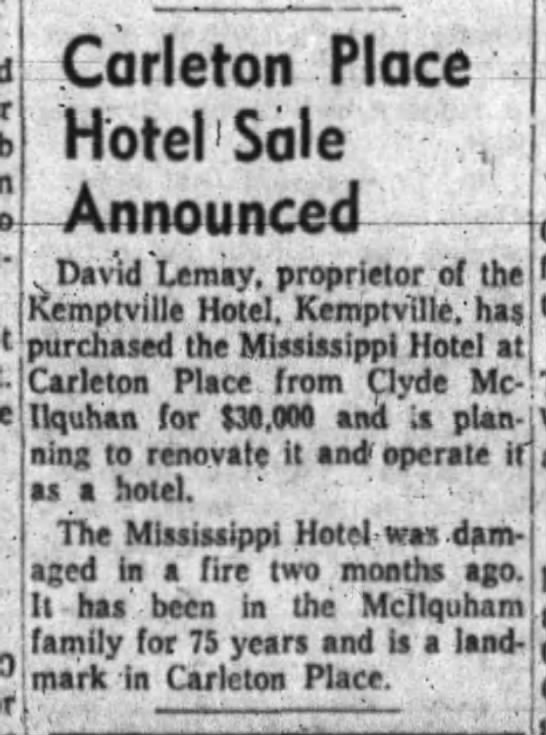