Brian Carter in front of the Mississippi Hotel – 1980’s

To anyone that thinks a building like the Mississippi Hotel sitting around empty doesn’t bother you, well you would be wrong. I have been in love with this building since I moved to Carleton Place in 1981. I also hated the hotel when it was home to strippers, motorcycle groups and drug users in the 80’s. The ‘ole gal’ deserved way better than that.

My late husband bought this hotel years ago and spent a great deal of money to bring her up to date. Youngest son Perry and his wife Stephanie did a good job running it until Angelo died. After his death it became a matter of utmost importance to delegate focus and time to other family real estate, and unfortunately the Mississippi fell by the wayside.

The only known photo of Napoleon Lavallee sits on my wall

Napoleon Lavallee bought the property for $50 in 1869 and opened the hotel in 1872 after he sold the Leland Hotel/ Carleton House on Bridge Street.  The McIlquham family bought it 11 years later in 1883 and when Joe Belisle worked there from 1917-1920 it had ornate woodwork, a grand staircase and the stone facade had wooden white wrap-around verandas. The elegant dining room tables were covered in  fine lace linen and gleaming cutlery, and the Mississippi Hotel became known for its homemade food and attracted travelling salesman from far and wide. The salesmen set up trunks in their rooms offering everything from dishes to clothing that was scooped up by local merchants that came to buy at the hotel. The place was packed daily with fans from Stittsville, Smiths Falls and Perth–and if you talk to Gerald Hastie people came in early for the fresh baked pies, and by noon they were pretty well sold out. 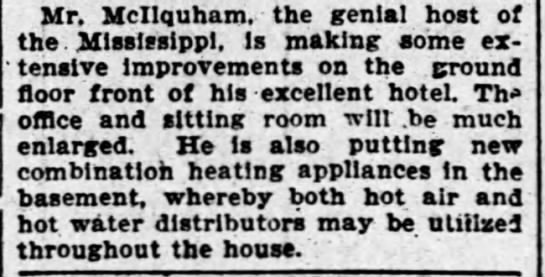 In 1907 after Mr. McIlquham died his son Clyde took over until a fire ravaged the veranda and top storey of the hotel in the 1950s. After the devastating fire that resulted in one life lost the McIlquham’s wanted out, and Lorraine and David Lemay bought the place for $30,000 in 1964.  Lorraine was indeed the Queen of the Mississippi Hotel and during the 60’s and 70’s it was known for its country music, especially Stompin’ Tom Connors. She once said that when she bought the Mississippi it was in better shape than it became in the later years that she owned it.

When anything dies or is sold,  you seem to inherit something- and Lorraine inherited a number of long-term residents who treated the hotel more like a boarding house. When she brought in loud rock music to the hotel it really wasn’t up their alley and they all soon left.

Having a business is tough–just because you own a business doesn’t mean you are rolling in the greenbacks. So once Lorraine lost the boarders she ran into financially stressed times trying to compete with local competition. Looking for ideas she decided to feature strippers and she said she was forced to bring them in to compensate for high priced rock bands. Well, it didn’t take long for the local folks to begin to criticize her even though they were not the ones paying her taxes.

Similar to the story of Art Fleming who tried to open a funeral parlour on Lake Ave West, the town citizens took matters into their own hands and began to protest in front of the hotel. Short lived, life moved on in the small town of Carleton Place, and drugs in the establishment became more of a problem than the strippers. In 1985 Lemay had just about enough and she sold the hotel to Brian Carter’s parents, who both died in a car crash three years later.

Motorcycle gangs began to hang out and the hotel was known for having the longest bar in the Valley. If you listen to gossip it was said that some bikers didn’t even bother to park outside and they just rolled right into the hotel. The average person wouldn’t dare go in there with the rows of bikes parked outside — and the hotel went into a major down slide.

Carter closed the hotel and looked for a buyer with a price tag of $625,000 and the only offers that came in were from oil companies that wanted it for the land–not the historic hotel that it was and still is. Carter, fed up, obtained a demolition permit and the building was going to go the same way as the Prince of Wales High School, Central School, and the Findlay home on High Street. In the end it was saved by the community, inspired by the late Stompin’ Tom Connors and the rest is history.

After many years of ups and downs I can happily say the “ole lady” has been sold and this 29,000 square feet of downtown real estate is going to very good hands. What fills the eyes fills the heart, and now every passing minute is a chance to turn this hotel all around again. Old places have soul and hopefully new ideas need old buildings. No matter what the hotel is named by the new owners it will always be “The Grand Ole Lady of Carleton Place” and I personally thank them for bringing her back to life. 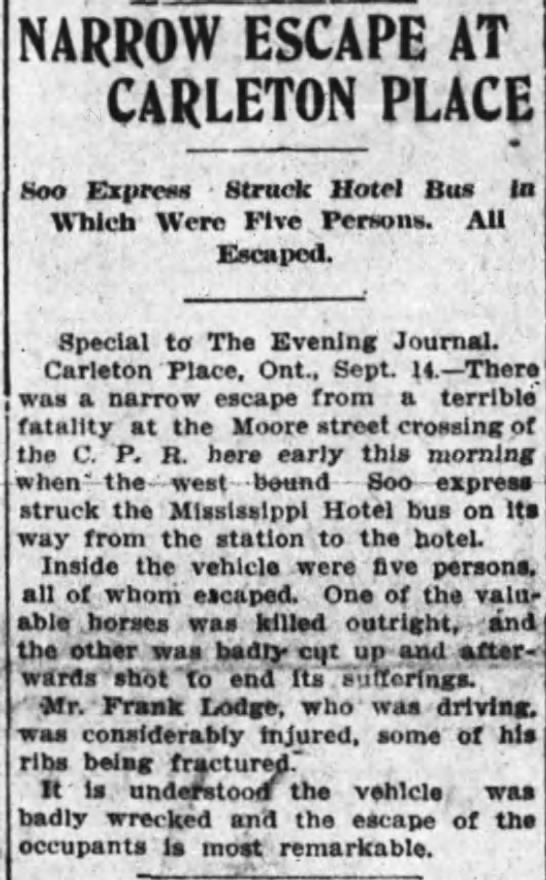 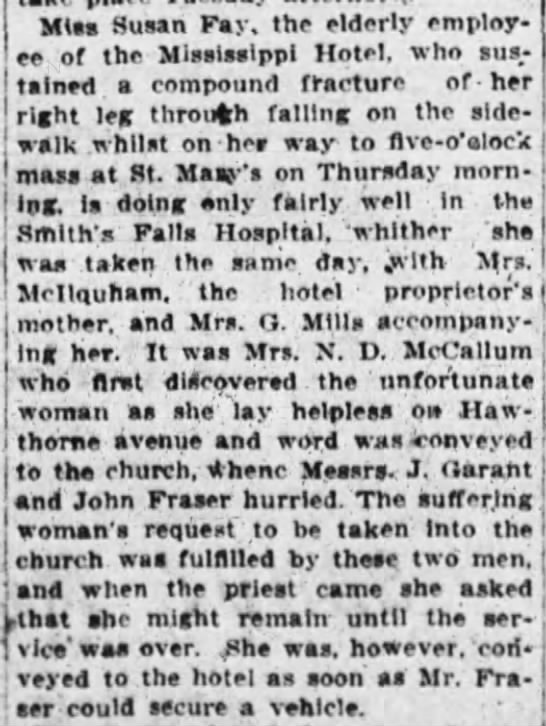 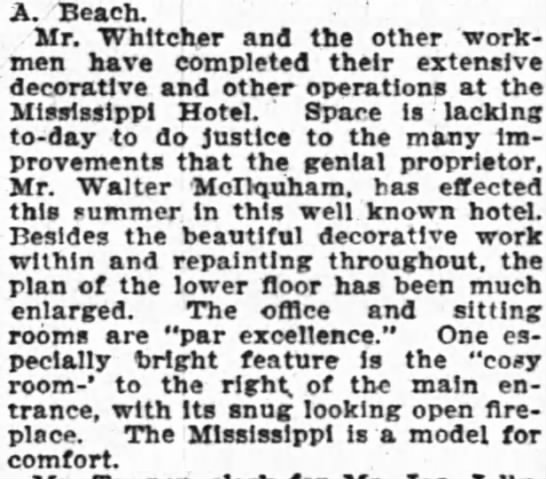 Murders and Mysteries of the Mississippi Hotel

Thieves at the Mississippi Hotel–When Crime Began to Soar

All About Lorraine Lemay –Mississippi Hotel

The Old Side Door of the Mississippi Hotel

The Napoleon of Carleton Place

In the Mississippi Hotel Mood with Mrs. Glen Miller

Romancing the Mississippi Hotel in 1961

Where Was Linda? A Necromancer Photo Blog -Victorian Seance at the Mississippi Hotel