Levi’s wife had died in a fire and I could not find out any information. Today I found the information and I am going to share it here to be documented.

On the 12th of July 1901 the funeral on Tuesday of Mrs. Levi Brian ( formerly Jennie Marshall of Clayton) was held in Carleton Place which was very largely attended. She died on Sunday night from the effects of burns, received that morning by the accidental explosion of a coal oil can. She was 45 years-old. The untimely death of such a highly esteemed lady, so faithful a mother, such a kind and generous neighbour, was a shock such as seldom comes to any community.

Six children are left with the grief stricken husband. They are Mrs. Albert Salter (Jennie), Eva. Melvin, Marshall, Warner and a 15 month old baby boy Hilton. In the funeral procession in body marched: the stone and brick masons and others engaged under Mr. Patrick McGregor in the erection of the Findlay buildings. The service in St. James Church, conducted by Rev. A. Elliott, was intensely solemn and impressive.

After his wife Jennie ( Jane) died in the fire he married once again to Annie Mary (Mary) Fanning of Carleton Place in Almonte on June 5, 1911. (Note: Mary is also related to the McNeelys) — see–

Maurice Burke, a cooper, made barrels across the street from where the post office now stands.  His sister Julia taught school in the Public School for many years.  We often heard the youngsters rhyming c-a-t  CAT, r-a-t RAT, etc.  She was burned to death in a fire as was Levi Brian’s wife.

In Memory of Jack Wilson — The Mason’s Mason 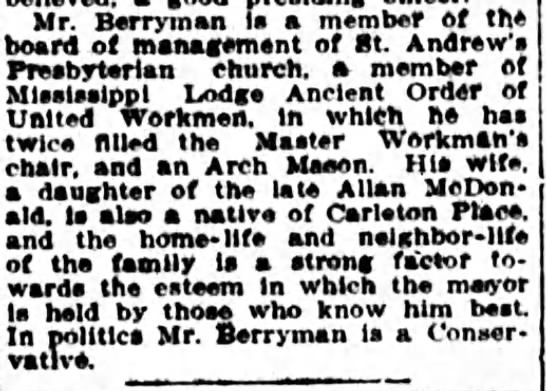 In a brief story I posted about Maurice Burke the coppersmith of Carleton Place I added that Maurice’s sister died in a tragic house fire in Carleton Place along with Levi Brian’s wife Jane. Today, while looking for something else, I found this notation from the March 1, 1889 edition of the Perth Courier:

“The Moffatt Brothers have secured tender for the new bank at Carleton Place.  Associated with them for the masonry is Levi Brian.  The price is about $7,000.   Central Canadian“

There was that name Levi Brian again. So after searching again I actually found some history about Levi Brian of Carleton Place.

Family pictured believed to be of Levi and Jennie (Jane) with their children. Photo from traveltales

After his wife Jennie ( Jane) died in the fire he married once again to Annie Mary (Mary) Fanning of Carleton Place in Almonte on June 5, 1911. (Note: Mary is also related to the McNeelys)  Levi’s son Norman Clifford (Warner) worked for the Carleton Place CPR. After pouring through tons of Almonte Gazette’s I still not find out anything about the fire. But, it was nice to put a face and photo to another long lost resident of Carleton Place.

He also owned the Leland Hotel at one time and sold it in 1907.–