December 5 1977 -Leita Andison, retired school teacher and community worker, was honoured by the town Saturday night when council awarded her the Citizen of the Year plaque at the annual appreciation night held in the high school auditorium. Miss Andison has devoted 57 years in the Girl Guide movement and was one of the first guiders when the movement started here in 1920. She taught school from 1925 to 1965 and has been supply teaching for the past 12 years.

Andison has worked with the Cancer Society, Hospital Auxiliary, Canadian National Institute for the Blind. St. John Ambulance, Imperial Order Daughters of the Empire and the Women’s Institute. She has been a life-long member of the Anglican church, where she taught Sunday school, sang in the choir and was an Anglican Young Peoples Associated Youth Leader, and a member of the altar guild.

She has delighted many readers over the years with her written verse on residents and events throughout the community, and is considered a local historian with a vast knowledge of the town and its people. In his remarks, Mayor Ted Le-Maistre referred to Andison as a naturalist who spends much of her time as a conservationist and as an avid ecologist. He praised her for her continuing contribution to the well-being of the town.

Caldwell Wilson, fire chief of the Ocean Wave Volunteer Fire Company, was presented with an Outstanding Citizen Award from the IODE in recognition of his services in the community. The appreciation night dinner is held annually to publicly thank those who contribute freely of their time on all of the council-appointed boards and committees.

Norma Ford What a wonderful, strict, compassionate person Leita Andison was, will never forget her from my Girl Guide days.

A poem about Carambeck by Leita Anderson-

Photo thanks to Lucy Connelly Poaps and her scrapbook– Leita Anderson–

Leita Andison wrote poems about our area and published them in 1979. This one is about Mrs. Neilson on the Neilson farm on the Appleton side road. Evelyn Kettles was her daughter. Thanks to Joyce Tennant..

Your friends of Beckwith Institute
Are thrilled Evelyn asked us out
To celebrate this day with you
And a sip of tea here too
When one can boast she’s 81
And think back over all the fun,
That’s filled her life– then she is one
Who knows that good work has been done
Now by a twinkle in her eye
You know she thinks of time gone by
When in Dumbarton, on the Clyde–She took a horse and buggy ride
So now your friends who’ve gathered here,
What you to know we hold you dear.
And with those roses bring our love
And pray his blessing from above.

Is your teacher here? Thanks to the Carleton Place and Beckwith Heritage Museum

This photo was taken in June of 1951. A teacher’s tea was held at Waves Inn on Franktown Road in honour of Mrs. Malloy who was retiring and Miss Cameron who was geting married.

IN 1918 the principal of the High School was paid a salary of $1600 a year which in those days was a princely sum. The other members of his staff were Misses F. Ewing, Patricia McNeely and C. Morton. The same year R. J Robertson chief of the public school received $950 and his staff besides himself consisted of Misses M. Cornell, L. McLaren, M. Surgeon, A. Anderson, C. Mallinson, H. Casewell, M. McCallum, D. May, V. Leach, Miss Mullett, L. Anderson, V. Devlin, A. Sherlock, M. McEwen and J. Burke.
David Henry was the caretaker of the High School and George Langstaff looked after the Public Schools. The secretary was Chas. Abbott who received $100 for his trouble and A.R Peden pulled down $75 for his trouble as treasure 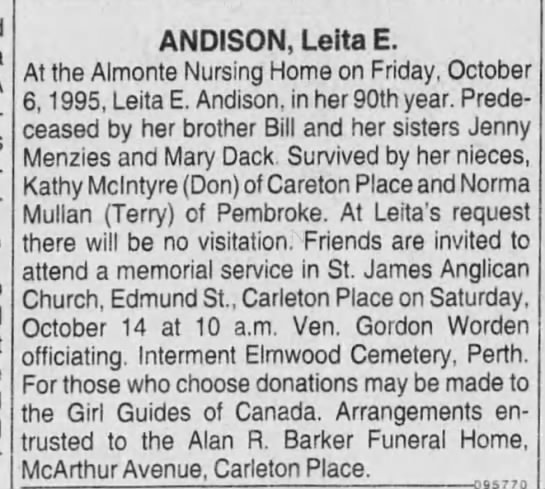 They Still Call Her Mrs. Blackburn!

What is Heritage by Cheryl Thomas 11 Years Old Franktown

The Things I did in School?—Tribute to Corey Sample