Our farm was corner of High st and Town Line.The maple bush was across the highway on the lake. Think they call it Birch point. We had a 1/4 mike of lake frontage and rented lots where people now have homes and cabins.

John Poole– I own this property now. The remnants of the old sugar camp are still there. Timmy told me that years ago some kids from town came out and burnt it down. I’ll go for a walk this weekend and get an updated picture.

John Poole thank you. That would be great. Huge memories for me. I remember the day it burned down. We had just come home from church and saw the smoke.Kids playing with matches

Sherri Iona–Ours was across the 7 from our farm (Orme’s bought it). There is a vehicle repair there now I think. All the great maples are gone. There is a picture of the sugar shack and bush in Wheeler’s museum.

John Poole:-Sherri Iona I own that farm as well. The large old growth maple was mostly harvested long before my time. I run my towing business out of there and farm the land.

Dave LashleyWally Burns the bush was right across from Clarke Greers. Our farm was just to the east off highway 7. The bush was at the northwest part of our farm. The farm was owned by Stan Tackaberry before my Dad, Don Lashley, and Grandfather Burnett Montgomery bought it in 1954. I remember sugaring in the bush with my Dad and grandparents in the 50s. I remember your farm and Birch Point and us hanging out once in awhile. My Dad started the Montgomery Shore cottage lots with 8 lots and the extension of the concession road to the lake. When we sold as Sherri Iona said my grandfather sold the rest of the shore lots west of the original 8. Our cottage built in the early 60s is still there albeit a bit different today.

The G.H. Grimm Company was one of the largest and most influential maple sugar evaporator companies of the late 19th and  all of the 20th centuries. The company began with Gustav Henry Grimm who was born in Baden, Germany in 1850. He came to new world in 1864 with his parents, settling in Cleveland, Ohio. A few years later as a young man, around 1870 Grimm moved to Hudson, Ohio with his new wife.  Grimm came from a family of tin workers, with the 1870 and 1880 census for the Cleveland area showing a number of other Grimms who immigrated from Germany to Ohio also listed as tin workers. Read more here..

A few Memories of Maple Syrup

Sticky and Sweet in Lanark County

So What Did you Eat with Maple Syrup? Pickles?

That Smell Of The Lanark County SAP Being Processed — Noreen Tyers 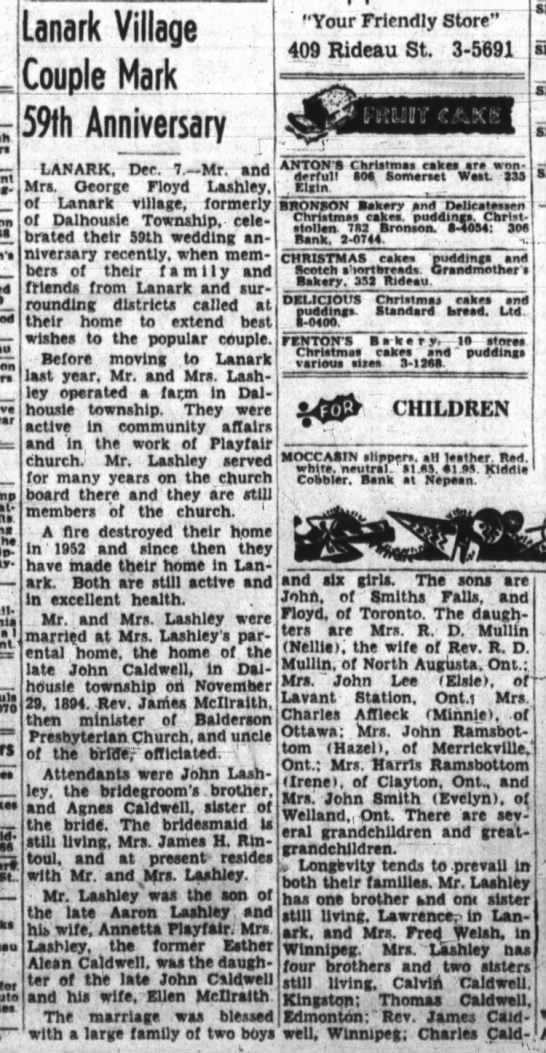 —-Today’s guest author is Sherri Iona (Lashley) –Thanks Sherri! If you have family stories please send them to me so we can share with the world!

Shirley Montgomery And DONALD LASHLEY on their wedding day In September 1950 on grounds of Zion Memorial. Mom had recently graduated from Ottawa Civic in nursing and Dad was entering his last year in B. Sc Agriculture at U of Guelph.
They spent about one year in Bowmanville before settling on the farm at Montgomery shores and Dad became a biology and environment teacher and eventual VP at PDCI. When I was ten we moved to 214 High Street in CP. Dad finished his career as VP at SFCDI.
Local farmers, like his brother-in-law Wesley Craig and my mom’s cousin’s husband Murray MacCrae , would help during the harvest. My mom who couldn’t cook when they married, made the most amazing pies.

Above is A very young Elsie Lever Powell. My younger brother’s daughter Quincy looks exactly like her.

This is Shirley Montgomery LASHLEY in High School.

This is Don LASHLEY, Univ graduate. It was said they called him called him “wee Donnie LASHLEY” in high School. He ended up 5’11”. His sister Lois Ann was 6′

My grandmother Laura Bradley Montgomery, Summer 1972. She died August 1974.She is standing in the circular driveway at the front of the big Montgomery house. When I was little she made outfits for my doll. She taught me how to embroider. I still have a tablecloth I started while she was alive. I also helped her to make a bottom collection presentation. She one 2nd prize at the county fair in Almonte. I have the collection, which was displayed in Almonte a few years ago. I had an expert look at it and everyone was in awe.

Button collection. She also made quilts, some I have.

If you look at the picture above one shows Robert and Elsie with my father Don LASHLEY and his sisters, Lois Ann (Craig), Joan (Turnbull) and Joyce (Dulmage, Nicholson). Another has the children with their parents John and Gladys (Powell) LASHLEY. John and Gladys, my grandparents brought their children up on the LASHLEY family farm near Watson’s Corners.

The original house burned October 20th, 1953 (date needs verification) and they moved to Smith’s Falls and ran a chick hatchery for a period and then bought the poultry farm on the 8th line of Ramsey near the school house. Grandpa had a heart attack there, so they sold it and moved to Carleton Place near Lake Ave east in the early 60s. Sadly, he died from heart disease in early 80s.

Grandma LASHLEY’s sisters, Olive and Fern Powell lived together in their parents’ home on Sarah St, a white frame home. The girls never married. There was a story that a well known politician in Ottawa who Fern worked for as a secretary asked her to marry him. She turned him down, but he gave her the ring any way. Olive was the French teacher at the High School,  and she taught all her nieces and nephews, along with a grandniece (me) and nephews. Fern loved to travel the world and Aunt Ollie loved to shop. To this day I still want to visit Switzerland and see Lucerne and the Matterhorn because of her stories.