The following is a sketch of the History of the Lanark Township Agricultural Society, which the Secretary, Mr. Arch Rankin delivered at the Anniversary Social. The opening years of the latter half of the 19th century, 1850-1851 and 1852 seem to have been eventful ones for the people of the Township of Lanark and surrounding territory.  At that time on the continent of Europe, events were transpiring which culminated in the Great Crimean War of 1854 and 1855. Some stirring and interesting events were also at that time occurring in Lanark Township, which were destined to affect the people of the locality for many years to come.    Then a keen and acrimonious controversy was rending the old Established Presbyterian Church in connection with the Church of Scotland as it was then termed over the question of patronage and the separation of Church and State. Many of the farmers were inclined to agree with the Free Church idea, anda considerable amount of bitterness was engendered and an attempt made to start a Free Presbyterian Church but the leaders of the movement in their attempt came into contact with a student of the Congregational Church named Mr. Hay, in 1851, whom they invited to preach for them for a time.

As the Presbyterian Minister lived in Lanark, and as the government of the Congregational Church just suited the temper of the people at that time, the first Congregational Church was organized in August, 1852, under the leadership of Reverend R.R. Black with the following charter members: Robert Robertson, James Arnott, Matthew Sanderson, Mrs. Alex Erskine, William Harding Sr., Alex McKay, Archibald Rankin, Mrs. Archibald Rankin, George Glossop, Robert Affleck, and Peter Reid Sr. In 1849 an Act had been passed by the Legislative Assembly granting or establishing Municipal Institutions for the Province of Upper Canada as Ontario was then known, and the first Municipal Council for the United Townships of Lanark and Darling met in January, 1850, the members being: Alexander Stewart, Robert Stead, Andrew Stevenson, Robert Robertson, Jean Waddell Anderson, with John R. Gemmill, the Editor and Proprietor of the “Lanark Observer” and the first clerk. 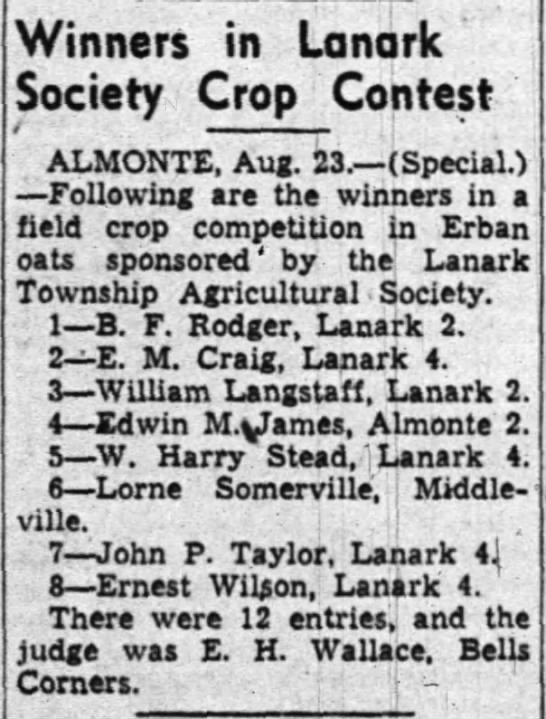 During the same year and probably as a result of the aforesaid Municipal Act, an effort was made to start an Agricultural Society. Some meetings were held and seven men paid their membership of 5 shillings each, as follows: Robert Stead, Alexander Horn, Wm. Stead, James Young, James Mair, Samuel Wilson, and John R. Gemmill, but it did not appear there was any business done, and it was not until the 11th day of May, 1851 that the Society was formally organized with the following members for that year: John M.G. Hall, John R. Gemmill, Francis Hale, Daniel Wilson, Joseph Lamont, Thomas Kelso, Robert Stead, Alexander Horn, William Stead, John Hall, John Taylor, and James Young, Bathurst. The avowed objects of the Society were the improvement of the live stock, the producing of improved seeds and grain and meeting for the discussion of Agricultural problems. Mr. John M.G. Hall was chosen as the first President and Treasurer and James Young as Secretary, and all the other members constituted a Board of Directors for the year.    The revenues of the Society for 1851 amounted to £4, 10 shillings, and was expended as follows: paid to Wm. Stead for purchase of rams, £3, 2 shillings, 9 pence; printing notices advertising and postage, £1, 2 shillings, 9 pence; book for Society, 4 shillings, 6 pence, total £4, 10 shillings, 0 pence.